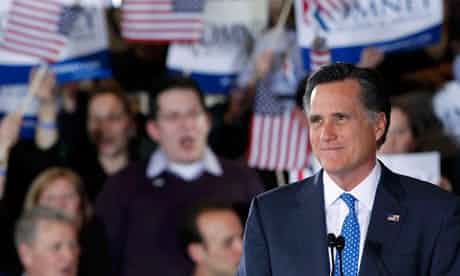 There are some things, even in American electoral politics, that money can't buy. It can get an organisation, ads and attention. But it cannot make you engaging, compelling or authentic. In short, it can't buy you love. And as Mitt Romney keeps showing, week after week, if the voters don't really like you, then you just have to spend as much money as you can making sure they don't like anybody else either.

Of the ten states that voted on Super Tuesday, Romney won six and bagged the most delegates. Ordinarily, that would be a great night. Until you realise that Newt Gingrich (who wants to build a colony on the moon) won one, Georgia; and Rick Santorum (who is against contraception) got three, Tennessee, North Dakota and Oklahoma. The totemic prize of Ohio went down to the wire.

This is a weak field with little money and fewer smarts. The fact that the Romney campaign eked out narrow victories in crucial places is cause for relief in his camp – and concern within the Republican hierarchy – but not elation.

It's like England in the last game of the 2010 World Cup soccer qualifiers, when they had to pray for victory against Slovenia and that Algeria didn't score a hatful of goals against the US. True, they eventually qualified. But in doing so, they laid bare their frailties and were roundly defeated in the next round.

Given the competition, the fact that the Romney campaign is planning for a long-drawnout delegate fight is a bit like Italy aiming to get through their regional qualifiers on goal difference. Romney should not be winning by "enough"; he should be winning by a lot.

And so, the Republican primary race dragged on Tuesday night, with talking heads and desperate anchors providing running commentary on an open sore. Romney, yet again, failed to seal the deal on the nomination, and no other candidate presented themselves as a viable alternative.

The six states that Romney took included Massachusetts (where he lives), Vermont (the state next door) and Virginia (where neither Gingrich nor Santorum had got it together to be on the ballot), as well as Alaska, Idaho and Ohio. The latter was the one he had to win, and his victory there followed a familiar trend. He entered the last leg, trailing.

Having seen in him in debates and maybe on the stump, voters go in search of an alternative. Any alternative. And then comes the money: millions of it pouring in to TV and radio stations, mostly trashing his opponents. Romney outspent Santorum in Ohio four to one. Add that to a superior organisation, a divided opposition, a roll-out of high-level endorsements (including Barbara Bush), and Romney squeaked home on the day by less than 1%.

The fact that he has won the most delegates is significant, but not sufficient. Primaries are not simply a means to get the best headcount, come the convention. They are supposed to introduce a candidate to the base so that the nominee can build a coalition to rally the party for the general election. Romney's candidacy is, if anything, doing the opposite. He was far stronger when everyone assumed he would win than he is now when he is actually winning.

Once again, Tuesday night, Romney won the rich and the well-educated and lost the party's base, white working-class, non college-educated men. The more likely you were to vote Romney, the more likely you were to have reservations about your choice of candidate. All of this will get worse before it gets better. The next week will see votes in Mississippi, Alabama (southern states where he's likely to lose) and Kansas (a midwestern one where he may well struggle).

True, he took Florida, but Gingrich won the panhandle (the southern region). Other than there, Romney has yet to win a single state in the South that was seriously contested, or struggle to more than a narrow victory in the Midwest, including Michigan, the state where he was born and raised. The first is the region of the Republican heartland; the second is the region where much of the election will be decided.

And the longer the contest goes on, the more entrenched becomes the framing of him as an ineffectual candidate who is identified with elites. Gingrich referred to him during his victory speech as "Wall Street". Not "like Wall Street". Just "Wall Street".

It was not a great night for the other candidates, either. Gingrich has stayed in on the dubious grounds that if he won his home state, he can win the country. Santorum has now proved that he is both a contender – winning Tennessee by double digits, in particular, was impressive – but not in serious contention. After losing Michigan, he needed to win Ohio to lay claim to the Midwest and the Reagan Democrats. His failure to do so indicates that while he can wound Romney, he lacks the capacity to land a fatal blow.

So, once again, Romney wins the elections and loses the narrative. The frontrunner who has the best coaches, agents and sneakers money can buy has to keep looking over his shoulder because he cannot get into his stride. Sometimes, rich guys just can't catch a break.