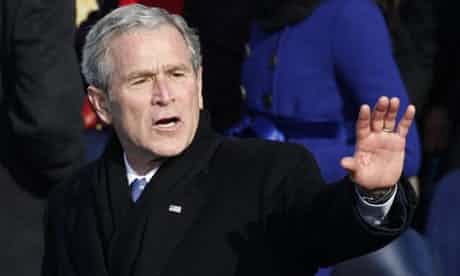 For Obama to apologise for US mistakes is not un-American
The Guardian,
Photograph: Jim Young/Reuters

It's funny how, among Republicans, George W Bush doesn't come up. It's been less than four years. Yet, neither in debates, nor on the stump, nor even in the crowd, does the name of the man who held the job for eight years merit a mention.

The fact that they do not rush to embrace him is no mystery and is not new. To remember him is to recall that they supported him, doggedly. That there was not a single mistake that he made in which all of these candidates were not, in some way, implicated. With the exception of Ron Paul, they all backed the wars, the tax cuts and the subsequent ballooning of the deficit. Bush is like Kryptonite: a reminder, not only of what happened the last time Republicans got their way, but of the situation that Barack Obama inherited. On deficits, the economy, foreign policy (pretty much everything, really) the sight of George W Bush does not suggest it's Morning Again for the shining city on the hill, but evokes dusk descending over a trailer park in Death Valley.

But they do not run away from him, either. When parties lose elections, a period of reflection generally ensues. Republicans can lay claim to none of that. Instead, they doubled down, preferring an intensification of their course, rather than introspection about it. They seek no distance between him and his legacy. They just pretend he never had one.

They don't even run around him. They just keep running over him, hoping that if they bury him deep enough underfoot, people will forget he was ever there. But amnesia is the privilege of the powerful. While Republicans are busy forgetting, others are living through the consequences of Bush's follies or, worse still, are dead because of them.

It is precisely from the deeply selective recollection of the last decade that all the Republican candidates (with the notable exception of Ron Paul) recite a mantra that, unlike Obama, "they will not apologise for America". Key among them is Mitt Romney, whose campaign book is called No Apologies: The Case for American Greatness and who has accused Obama of going on an "apology tour" after he took office. In Romney's words:

"Never before in American history has its president gone before so many foreign audiences to apologize for so many American misdeeds, both real and imagined. It is his way of signalling to foreign countries and foreign leaders that their dislike for America is something he understands and that is, at least in part, understandable. There are anti-American fires burning all across the globe; President Obama's words are like kindling to them."

Newt Gingrich, in his victory speech on Tuesday, got one of his biggest cheers when he said: "I want us to have an American energy policy so no president will ever again bow to a Saudi king." (Going on bended knee to Sheldon Adelson for more contributions is, presumably, not a problem.)

Each one, in different ways, suggests that Obama has adopted a craven, supplicant tone with the rest of the world that both ill suits America's status and, thus, debases its role as a world leader. There are a three main problems with this.

First, while there have been many criticisms one can make of Obama's foreign policy, from his use of drones to his continuation of rendition practices, he has never actually apologised for the country. Most of the accusations that he has done so stem from the period very early on in his career when he sought to distance himself from his predecessor – which is what presidents do. Examples suggesting otherwise are either taken out of context or are just plain wrong.

As was the case with the recent Qur'an burnings, he has apologised for isolated things done in the country's names. But that's normal Bush – remember him? – did the same. When asked about prisoner abuse at a news conference with Jordan's King Abdullah in 2004, for example, Bush said:

There is a difference between apologising for Americans or America, the people and the country, and apologising for the things that Americans might do. The first would, indeed, mark a pusillanimous bow to prejudice about who are Americans are; the latter indicates a sense of responsibility for actions and an awareness of the consequences of what Americans do, particularly when representing the country.

Which brings us to the second point. America has done a number of things it needs to apologise for. There are precious few countries that don't at some point in their history (Britain being pretty high on the list). When Romney writes, "Never before in American history has its president gone before so many foreign audiences to apologize for so many American misdeeds, both real and imagined," he forgets that Bush gave Obama a lot to apologise for, including invading countries on false pretences, torture, violating international law.

This is not a sign of weakness, but of strength. Unless you are prepared to show that you know right from wrong, how is anyone supposed to believe that you are capable of righting wrongs. If Republicans are serious about being respected again in the world, then they need to disinter George Bush and examine the remains.

If they want to establish a leadership role (their desire not mine) then they should act like leaders. To refuse to apologise either suggests you've done nothing wrong and can do nothing wrong, or simply elevates arrogance to a point of principle.

Which leads neatly to point three. Far from debasing America's international image Obama has massively improved it. Six years into Bush's term, a Pew survey showed that most of the world saw America as a greater threat to world peace than Iran. Favourable impressions of the country had slumped not just in the Arab world but among its historical allies, including in the UK.

Obama's election turned that around. Describing 2008 as a pivotal year, a Pew Research Centre survey showed America's image rebounding, primarily among its allies:

"The election of Barack Obama led to dramatically higher ratings for the US in many nations. This was especially true in western Europe, where the new president received astronomical ratings – in 2009, for example, 93% of Germans expressed confidence in Obama's leadership, as did 91% in France."

What the Republicans are really saying when they slam Obama's global outreach is that they do not care what the rest of the world thinks of them. Embedded in this attitude is the implication that they do not need to care because they are the richest, most powerful nation on earth.

The trouble is, their wealth and power are in relative decline and their experience in Iraq and Afghanistan have shown that they cannot do it alone. This was the conclusion of the National Intelligence Council, which coordinates analysis from all US intelligence agencies. While acknowledging that the US would remain the single most powerful force in the world, the NIC reported:

"Owing to the relative decline of its economic and, to a lesser extent, military power, the US will no longer have the same flexibility in choosing among as many policy options."

Put bluntly, if being Republican means never having to say you're sorry, then being a Republican president means having few dependable allies. The claim that, unlike Obama, these Republican candidates will never apologise for America is not just flawed in fact, but would make America less respected, less safe and less able to pursue its interests in a multilateral world. Indeed, it repeats the very same mistakes that made Iraq such a disaster for Americans – never mind the Iraqis.
Bury the legacy of George Bush and you bury these lessons – along with the sacrifice of several thousand soldiers and untold tens of thousands of innocent Iraqis. Obama may not have apologised for America, but Republicans should be apologising to Americans.