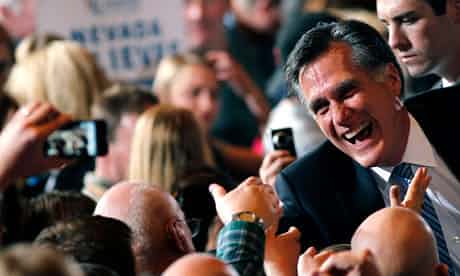 Never mind Mitt Romney, don't bet on any party to care about the poor
The Guardian,
Photograph: Gerald Herbert/AP

In the summer before the 2004 US election I was in Maine, which at the time was considered a swing state. There I met Cynthia Huntington, who adopted me as a friend and invited me out for a picnic. We were talking politics on the banks of Lake Tunk when she explained a personal and economic dilemma that, for her at least, held electoral consequences. She was 60 and had a hernia but had no health insurance and no means to pay for an operation.

She had a choice. Wait five years in pain and possibly peril so she could qualify for Medicare, or have her operation immediately – in which case the state would pay for it and in return get her property when she died. She'd worked all her life and did not want to leave her children with nothing. Tough as the decision was, she did not believe the outcome of the election would make it any easier. "They don't give a shit about us," she said, suggesting that she might vote for Ralph Nader. "They're all rich people and they're all run by corporations. They don't care about the fact that I need surgery and can't pay for it." "You want to let Bush back in and make things even worse?" asked her friend. "Worse than what?", replied Huntington. "Kerry's not going to get me my operation."

There is precious little room for sanctimony in American mainstream politics. True, Democrats talk the language of inclusion, uplift and compassion more fluently and believably than Republicans. But their record in office, broadly speaking, suggests anything but. The Republicans cheer a Republican governor, Rick Perry, because he has executed more prisoners than anywhere else. A Democratic crowd wouldn't do that, but Democrats would still execute people. When Bill Clinton was running for president, he made a special trip back to Arkansas to oversee the execution of Ricky Ray Rector – a lobotomised inmate so mentally incapacitated that when given his last meal, he opted to save the desert for after the execution. Unlike Newt Gingrich, no Democrat would ever claim that Palestinians are "an invented people" who only came into existence in the 1970s. But when it comes to foreign policy, there is not a substantial difference between Democratic and Republican policy in the Middle East. Drones still fly, Guantanamo still stands and rendition continues.

This is not to claim that there is no difference between Democrats and Republicans, or that that difference may matter: that's an argument worth having, but it's not the point I'm making here. It is merely to point out that when Democrats start to sound sanctimonious, the ground beneath them starts to open up and swallow them whole. The difference between the two resembles James Baldwin's description of the North's treatment of African-Americans compared to the South's: "What it promised it did not give, and what it gave, at length and grudgingly with one hand, it took back with the other."

The aim here is not to give Romney the benefit of the doubt. As a millionaire several times over who is campaigning for the rights of millionaires to be even richer and the poor to sacrifice even more, he has all the benefits he needs. But the desire to take quotes out of context in order to frame candidates is juvenile and makes the chance that there will be any substantive debate – which is what this country needs – more remote. Otherwise politics is reduced to a gaffe-fishing exercise which, in a 24-hour cable environment, will always produce a catch. It's obvious how this works for journalists and political operatives; it's not so clear what's in it for the poor.

It was no less ridiculous when Republicans honed in on John Kerry referring to the funding for the Iraq war: "I actually did vote for the $87 billion before I voted against it." For anyone who knows anything about senatorial procedure, it made perfect sense. Republicans were banking on the fact that most people didn't. Any strategy that relies on people not wanting to know the facts cannot lead to much good, even when it works.

As the party of "welfare reform" that repealed Glass-Steagal – financial legislation that could have thwarted the severity of this recession – the Democrats have not done an awful lot for the "very poor" since Lyndon Johnson either. Unlike Republicans who openly lobby for the class interests of their corporate supporters and deliver on them, Democrats do not promise substantial changes to the lives of ordinary working people and rarely deliver even on the symbolic ones. In short, Democrats demand a greater class attachment than they offer and therefore deserve. That doesn't mean they should not criticise Romney for what he said, but that a bit more humility in how they do so might rescue them from accusations of hypocrisy.

For the real problem with what Romney said is not that what he said about "not being concerned about the very poor" was true: while I might disagree in context it made sense.. It was that pretty much everything else he said was a lie. He's not going to repair the safety net, in fact he's going to rip a huge whole in it, and the 90, 95% of Americans who are now struggling are going to continue to struggle if he wins. According to Nobel prize-winning economist and New York Times journalist Paul Krugman, "his Medicaid proposal appears to involve a 40% reduction in financing compared with current law." His repeal of Obama's health care laws would be disastrous for the that third of Americans who, according to a new measurement by the Census Bureau which takes regional cost of living, medical payments and other expenses that do not intrude on the official poverty count, found a third of Americans are either in poverty or desperately close to it.

Romney's election in particular, and the Republicans in general, would be a terrible thing for poor and middle class people in America. Since we can prove that by exposing what he actually says and does, why insinuate it by lambasting him for something he neither said, nor meant?