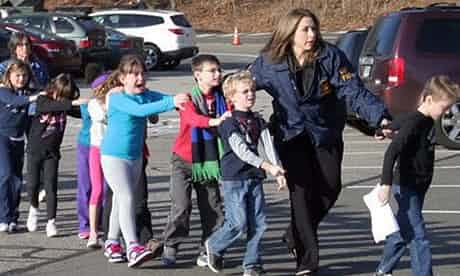 Newtown shootings: if not now, when is the time to talk about gun control?
The Guardian,
Photograph: Shannon Hicks/Newtown Bee

Friday's mass shooting at Sandy Hook school in Newtown, Connecticut is shocking and horrifying – the time and the place of these massacres inevitably catch us unawares. But the fact that another mass shooting has occurred is not shocking, any more than the last one was, or the next one will be.

Just as with the mass killings earlier this year at a Sikh temple in Wisconsin and the Aurora movie theater, near Denver, Colorado, the chorus of empathetic responses that will follow these tragic shootings in Newtown, Connecticut marks a stubborn refrain in a perennial American elegy. Different singers mouthing different words, but basically singing the same song.

Psychological profiles of the shooter emerge, along with portraits of the victims, while the political class closes ranks so that the nation can heal. Incanted tones to sooth a permanent scar.

All rituals serve a purpose. And this one is no different.

This Friday, 28 people are currently reported shot dead, including 20 children. Their families must be given space to mourn, and that space should be respected.

But it does not honour the dead to insist that there must be no room in that space for rational thought and critical appraisal. Indeed, such situations demand both. For one can only account for so many "isolated" incidents before it becomes necessary to start dealing with a pattern.

It is simply not plausible to understand events in Connecticut this Friday without having a conversation about guns in a country where more than 84 people a day are killed with guns, and more than twice that number are injured with them.

Amid all the column inches and airtime now being devoted to these horrific slayings, though, that elephant in the room will remain affectionately patted, discreetly fed and politely indulged. To claim that "this is not the time" ignores the reality that America has found itself incapable of finding any appropriate time to have this urgent conversation. The victims in Newtown, Connecticut deserve at least that. And these tragedies take place everyday, albeit on a smaller scale.

America's president, Barack Obama, understands this. The number of homicide victims in his home town of Chicago this year has outnumbered the fatalities among US troops serving in Kabul.

In response to the Aurora shootings in July, President Obama was right to suspend the routine campaign rhetoric and play the statesman. Nobody wanted to hear about Mitt Romney's tax records and stimulating the economy on that day. There were other days for electioneering, true, but he was wrong to insist on this:

"There are going to be other days for politics. This is a day for prayer and reflection."

Yet that "other day" for debating gun laws never came – not at any point in the three months that remained before the election. Even now, right on cue, the president's spokesman, Jay Carney, has intoned the familiar strain that "now is not the time" to talk about gun control.

For what are we to reflect on if not how this, and so many other similar calamities, came about. Those who insist that we should not "play politics" with the victim's grief conveniently ignore that politics is what caused that grief. Not party politics. But a blend of opportunism on the right that flagrantly mischaracterises the issue, and spinelessness on the left that refuses to address it.

The trite insistence that "guns don't kill people, people kill people" simply avoids the reality that people can kill people much more easily with guns than anything else that's accessible. Americans understand this. That's why a plurality supports greater gun control, and a majority thinks the sale of firearms should be more tightly regulated.

The trouble is that people feel powerless to do anything about it. The gun lobby has proved sufficiently potent in rallying opposition to virtually all gun control measures that Democrats have all but given up on arguing for it. In the meantime, the country is literally and metaphorically dying for it.

Gun control is possible. There are both a constituency for it and an argument for it. But it can't happen without a political coalition prepared to fight for it.

If America can twice elect a black president, it can do this.

• Editor's note: this is a revised and updated version of an article by Gary Younge that appeared 20 July 2012. This article was also amended as the number of casualties was confirmed