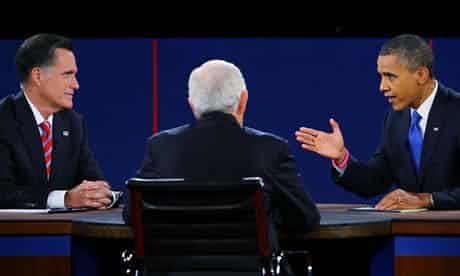 If the world could vote on 6 November, Barack Obama would win by a landslide. A global poll for the BBC World Service revealed that 20 out of 21 countries preferred the president to his challenger. But when you watched the presidential debate on foreign policy on Monday night you had to wonder why. Not because Mitt Romney was better, but because on matters of policy, Obama was almost as bad. It takes a friend to reveal the harsh truth to the global community, so here it is: "Obama's just not that into you."

No one could love Israel more, care less about the Palestinians, put more pressure on Iran or be a greater fan of drone attacks or invading Libya. Both candidates agreed that America's task was to spread freedom around the world: nobody mentioned Guantánamo Bay, Abu Ghraib or rendition. "Governor, you're saying the same things as us, but you'd say them louder," said Obama. It was a good line. The trouble was it condemned them both.

When Romney complained that America had fewer ships in the US navy than in 1916, Obama answered: "We also have fewer horses and bayonets."

Obama's task was to cast his opponent as an opportunist out of his depth, not waving at the electorate but drowning before them. Promising to be "strong and steady not wrong and reckless," he painted Romney at every opportunity as a flip-flopper.

Romney had a tougher task. With the race tightening and just two weeks to go until polling day, he had to focus the national imagination on the prospect of a President Romney. His problem was that Obama had left no room to the right on foreign policy that would not have left Romney sounding like Herman Cain (who would probably bomb Ubeki-beki-beki-beki-stan-stan if only he had known where it was).

So after a month of shape-shifting, fact-mangling and question-dodging Romney finally morphed into a peacenik. "But we can't kill our way out of this mess," he said, with a plausibility that would have had him booed off stage in a Republican primary.

He spoke of promoting peace and democracy as though that had been the idea all along, and America's benevolent instincts had been blown off course by some freak wind. He parried Obama's slights as though they were beneath him. "Attacking me is not an agenda," was one retort. "I've got a policy for the future," was another.

But there are only so many times you can shake an Etch A Sketch before its capacity to form an image starts to falter. Romney was less than convincing. And while Obama's put-downs were well-rehearsed, they also worked. He came out on top although it's difficult to imagine he changed any minds or converted any waverers.

Both men, when given half a chance, tried to steer the debate back to the central issue in the election – the economy. Viewers could be forgiven for thinking the answers to issues relating to Iran, Afghanistan, the Middle East, Iraq or China were Obamacare, educational reform, tax rates and loopholes.

This was the last set-piece of the campaign. After the primaries, conventions and two previous debates, all that's left now are doors to knock, phones to ring and rallies to attend. On the ground and in the heartland there is still everything to play for. But from the podiums and the spin rooms the campaign has played itself out.

follow on twitter
RT @BernardineEvari: Please follow the groundbreaking online #MuseumofColour UK, founded by the unstoppable Samenua Sesher. The 1st gallery…
RT @EthnicityUK: Gary Younge is interviewed by @sonikkalogan about his work on racism and gun violence in @the_hindu #DataPoint podcast. h…
RT @thefreedomi: 🚨 NEW: Saudi women’s rights activist & academic Salma al-Shehab was sentenced to 34 years in prison + 34 year travel ban f…
RT @LRB: #DawnFosterForever! On Thursday 15 September at the @LRBbookshop, @BizK1, @piercepenniless, Lynsey Hanley and @garyyounge will d…
RT @ShowunmiV: This is how we support Black women and girls https://t.co/8YmgV21zHo
RT @sonikkalogan: It's #DataPoint Pod Thursday! In this week's episode, I talk to @noraneus, @garyyounge and @Casey_J_Wooten about the U.S.…
RT @bgnoiseuk: Next month, @LRBbookshop will host an event to celebrate the life and work of Dawn Foster with @BizK1, @piercepenniless, Lyn…
Help me Twitter. The quote: ""You can cut all the flowers but you cannot keep Spring from coming." is most commonly… https://t.co/Xs7JkiOEd5
RT @the_hindu: #DataPoint | This Thursday, @sonikkalogan takes a look at the #US gun violence epidemic, as mass shootings continue to grow…
City workers get double-digit wage rises while lowest-paid see 1% increase - “Them’s the breaks” https://t.co/XeVyG72iA5
© Gary Younge. All Rights reserved, site built with tlc
How do i get persantine Generic samsca cost Cheap lipitor How to get propecia without a doctor Cost of phenergan suppositories Where to buy generic aromasin How to get a aricept prescription from your doctor Where can i buy caduet Generic keflex cost Buy generic celexa