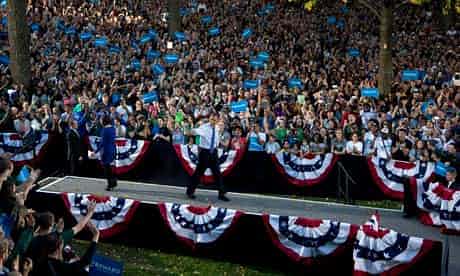 This presidential election show is lame, but the outcome could be dramatic
The Guardian,
Photograph: Carolyn Kaster/AP

'There are two ways you can interest [the average American] in a campaign, and only two that we have ever found successful," wrote Clem Whitaker, the co-founder of America's first political consulting firm. "He likes a good hot battle, with no punches pulled ...", or "he likes the movies; he likes mysteries; he likes fireworks and parades ... So if you can't fight, PUT ON A SHOW! And if you put on a good show, Mr and Mrs America will turn out to see it".

With just a fortnight to go before polling day, the "show" has been terrible. Democrats are running the same acts that they did last time, and hoping that nobody will notice. Concluding the first TV debate, President Barack Obama's closing argument was: "Four years ago I said that I'm not a perfect man and I wouldn't be a perfect president ... But I also promised that I'd fight every single day on behalf of the American people and the middle class, and all those who are striving to get in the middle class. I've kept that promise and if you'll vote for me, then I promise I'll fight just as hard in a second term." I tried my best. I want another go. It's hardly a pitch bursting with vision.

His opponent, Mitt Romney, is worse. He has visions a-plenty. In his crystal ball he sees a land of free-market unicorns galloping under tax-slashing, deficit-reducing rainbows where, if only government would get out of the way, prosperity would fall from the sky. Those are the visions that he will admit to, and insists that he has costed. The ones he won't take ownership of look like a black and white version of Mike Leigh's 2004 film about illegal abortion in 1950s London, Vera Drake, in a land full of ungrateful moochers.

It's not a difficult or inspiring choice, particularly for progressives. And it's not much of a show, either. The most sympathetic character has terrible lines; his foil has no character; and there has not been much of a plot to lose. There are serious issues to be dealt with and there are debates about policy, morality and ideology to be had and, contrary to Whitaker's claim, many "average Americans" are interested in them. But elections, apparently, aren't the place to have them or to resolve the issues in question.

But while the show may be dull, the fight has just got very interesting. What was beginning to look like a foregone conclusion, in which the contest was always close but an Obama victory increasingly likely, is now wide open. Few now doubt that Romney could win. Indeed it's indicative of just how poor the show has been that Obama's eight-month lead could be eroded with a single poor 90-minute performance. Before then, he was leading by default. Once Romney's Etch a Sketch finally settled upon a plausible version of himself, the uncommitted and unconvinced were prepared to take a second look.

The final two weeks will be volatile. On Saturday alone, three different national polls ranged from showing Romney ahead by 6% to him trailing Obama by 3%. Obama maintains a wafer-thin lead in enough swing states to remain the favourite. But that lead is decreasing, and in several places – Florida, Virginia, Colorado and North Carolina – it has disappeared completely. Barring something unforeseen during the last debate, the outcome will be shaped by three related factors: enthusiasm, organisation and cash.

Polls suggest that there is no significant enthusiasm gap between the two parties. Democrats still genuinely love their candidate, Republicans have learned to tolerate theirs. Romney's inauthenticity as a conservative was the price they were willing to pay for his electability as a candidate. When he looked like a loser, the base felt they had the worst of both worlds. Now that he's viable, they are engaged. The momentum is definitely with the Republicans. They are cresting late and strong. Conversely, in three short weeks, Democrats have gone from complacency to panic to relief, and are only now regaining confidence.

They'll need it. Enthusiasm is important for two main reasons. The first is voters: people need to be energised enough to get to the polls. The second is volunteers: someone has to get them there. This is a much bigger issue for Democrats, whose base of young, black and Latino voters traditionally manage a lower turnout and have fared particularly badly under Obama.

That's where organisation comes in and the Democrats are more impressive. They have three times as many field offices as the Republicans in Ohio, and more than twice as many in Florida and Nevada. The Republicans insist that this is of little significance. They may be right. Offices don't necessarily mean action. On Saturday morning the Obama office in Ybor City, near Tampa in Florida, was empty, and the county headquarters was closed.

Nonetheless, Democrats are clearly doing something right. Considerably more voters in the swing states say they have been contacted by them during the last month than by Republicans. Meanwhile, 3m votes have been cast nationwide. In Iowa, a third of likely voters said they have already voted, and Obama leads among them by some 67% to 32%. In Ohio, Florida and North Carolina, the picture is more mixed and inconclusive – but, broadly speaking, at this early stage Democrats are doing better at the actual polls than in the opinion polls.

That's just as well. For gains earned in sweat on one side can be clawed back with cheques by the other – a fact born out in Wisconsin in June, during the recall vote where grassroots mobilisations could not compete with massive advertising buys. Romney knows this. During the primaries, he and his surrogates would eke out narrow victories from statistical draws with millions of dollars in TV advertising. He doesn't have the cash advantage over Obama that he did against his primary challengers. But with unlimited donations now legal, a major cash infusion at this late stage on either side could make all the difference – and it's more liable to come Romney's way than Obama's.

Like many, I would rather talk about what will change than who will win. But the show is lame, and the fight is on. The question of who will win and how has become urgent, unpredictable and dramatic in a manner few could have imagined. Almost every outcome lies within the margin of error. Those margins are getting narrower. And the error could be great.