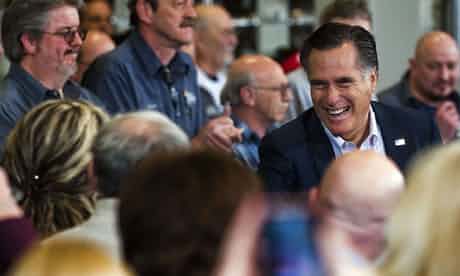 Obama is still in a hole. It may yet be deeper than his Republican rivals'
The Guardian,
Photograph: Jim Watson/AFP/Getty Images

Last Wednesday the Federal Reserve announced the first quarterly rise in consumer borrowing since 2008, bringing it close to pre-recession levels. The next day Mitt Romney, the frontrunner for the Republican presidential nomination, was on the stump in Pascagoula (population: 23,677). "If the federal government were run more like the government here in Mississippi," he told the inhabitants of America's poorest state where infant mortality is on a par with Botswana, "the whole country would be a lot better off".

The next day, as the economy added 227,000 jobs in February, the third straight month of employment growth, Romney told supporters at a tractor factory in Birmingham, Alabama, it was time to get America back to work.

It is difficult not to look at US politics as though on a split screen and conclude that the Republicans are doomed. On one side is a primary race imploding under the weight of its own eccentricities. Republican voters like Romney just enough to give him the nomination but not enough to avoid damaging him in the process. They loathe Barack Obama, but not enough to make ousting him a priority. Less than half of Republicans voters in the swing state of Ohio said the most important quality in a candidate is that they can actually win the presidency.

On the other side is Obama, appearing above the fray, with approval ratings edging up with each positive piece of economic news. Since the summer, 9% more Americans think the economy is improving – and 9% fewer think it will get worse

Flitting between those screens it appears obvious that Obama is likely to coast towards a second term. Even Conservatives sense it. Recently, Washington Post columnist George Will suggested Republicans forget the White House and focus on winning Congress. "Neither [Romney nor Rick Santorum] seems likely to be elected," he wrote. "Neither has demonstrated, or seems likely to develop, an aptitude for energising a national coalition that translates into 270 electoral votes [the number of electoral college votes needed to clinch the presidency]."

But appearances are deceptive. Just because Obama is doing better than he was doesn't mean he's doing well. Tough as it is to imagine Romney delivering the inauguration speech next January, it remains somewhere between a distinct possibility and a likelihood.

It's worth remembering that Obama didn't win by that much in 2008. Despite his strengths as a candidate, a campaign that was better funded and run, an economic meltdown in the middle of the campaign, one war gone sour and another on the turn, he only got 53% of the vote. Of the 192 electoral votes separating him and John McCain, 73 were won with just 52% of the vote or less.

Then the economy tanked further and, in the 2010 midterms, Democrats suffered the biggest swing against a governing party since 1948. The formidable coalition of African-Americans, Latinos and the young that took him to power four years ago was made up of the very groups that have suffered most under his presidency. Many liberals, meanwhile, feel disappointed. All of them still overwhelmingly prefer him to the Republicans. But a lack of enthusiasm means they are unlikely to turn out in the numbers they did last time.

Nor can he now pose as the agent of change. Shortly after his inauguration, Obama said of the economy: "If I don't get this done in three years, then there's going to be a one-term proposition." Today 58% believe the country is on the wrong track.

True, the employment outlook is improving. Sadly for Obama, that's not the best economic indicator for electoral success. For that, most political economists track real disposable personal income growth per capita, or what the average person has left after tax and inflation. For the first 11 quarters of his presidency, the RDPI has stood at -0.4%. Obama, in short, is digging himself out of a very large hole. The question is whether he has a shovel-ready solution capable of digging him out fast enough.

One can debate whether this is fair given the situation he inherited and his other achievements. But the point here is not to argue the merits of his vulnerability but to state the fact of it and gauge its depths.

Obama took nine states from Republicans in 2008. In the midterms, Republicans took more than 20% of the House seats from Democrats in those states. Between 2010 and 2011, Obama's approval rating fell in all of them and ended the year lower than 45% in all but one. Since he took office, unemployment has risen in all but two of them and is above the national average in four. Polls show that if Obama were to face Romney today, he'd win four and four would be toss-ups. (In Indiana, where Obama scraped his narrowest victory, no recent polling has been done.) Astonishingly, the odds don't change much if Santorum were the nominee.

That would still make Obama the victor. But not by enough to be complacent. A lot can happen between now and November. In April 1988, polls gave a Michael Dukakis-Jesse Jackson ticket a 47-42 victory over George Bush Sr. Dukakis chose a more moderate running mate and was still trounced. In 1991, after the Iraq war, even the head of the Association of State Democratic Chairs described Bush Sr as "getting close to unbeatable". He lost.

The trouble is, it's easier to see how things get tougher for Obama – petrol prices, a eurozone collapse, Iran – than for Romney over the next eight months. Soon Romney will be the nominee, Santorum and Newt Gingrich will be his loyal advocates (who knows what Ron Paul will do?) and the white evangelicals and Tea Party types will find motivation in their Obamaphobia. This may well be the worst it gets for Romney and, in national polls, he still only loses to Obama by just beyond the margin of error.

Data isn't destiny and polls aren't elections. Republicans are doing their best to give Obama the weak opponent he needs and, on that count, Romney has been obliging. Low turnout in these primaries indicates Republicans also have an enthusiasm problem, and with every primary their internal dysfunction becomes more apparent.

All the more reason not to underestimate their potential and potency. The next time a Republican says something ridiculous about contraception, jihadist training camps in South America or how their wife has two Cadillacs, remember: that could be the next president you're laughing at.