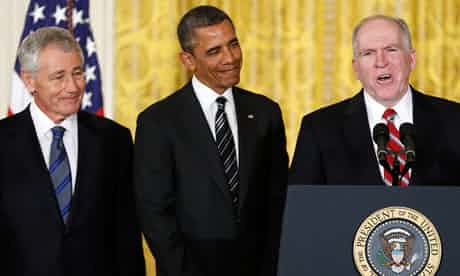 In April 1968 a squad from the US 9th infantry division in Vietnam hit a tripwire, triggering a landmine. In the troop carrier were two brothers, Chuck and Tom Hagel. Chuck freed an unconscious Tom from the wreckage and both were evacuated. "The night Tom and I were medevaced out of that village I told myself: if I ever get out of this and I'm ever in a position to influence policy, I will do everything I can to avoid needless, senseless war," Chuck told Vietnam magazine. In 1996 Chuck was elected Republican senator for Nebraska. Presented with a "needless, senseless war" in Iraq in October 2002, he voted for it. Last week Obama picked him for defence secretary.

On 22 April 1971 John Kerry, a young Vietnam veteran, testified before the Senate Foreign Relations Committee, highlighting the war crimes committed by American servicemen in Vietnam and asking: "How do you ask a man to be the last man to die for a mistake?"

"We rationalised destroying villages in order to save them," he said. "We saw America lose her sense of morality as she accepted very coolly a My Lai and refused to give up the image of American soldiers who hand out chocolate bars and chewing gum."

In October 2002, when presented with the chance to prevent American servicemen dying and killing for a mistake, Kerry didn't take it. As Democratic senator for Massachusetts he too voted for the Iraq war. Last month Obama chose him for his secretary of state.

For all the blood spilt and treasure spent in US military conflict, the carnage and chaos they inflict and the enemies they create, precious few of the lessons seem to trickle up to the political class. Obama's most recent nominations suggest that, for all his rhetoric about turning a page in foreign policy, he cannot resist returning to the authors of its most discredited recent chapters to craft the next episode.

Obama's opposition to that war was essential to his appeal both within the Democratic party and to the nation at large. It countered criticism about his lack of experience and overarching ambition with evidence that he had judgment and principle. Just a week before Kerry and Hagel voted for the war, Obama spoke against it at a rally in Chicago, when he was an Illinois state senator, branding the invasion, "a dumb war. A rash war. A war based not on reason but on passion, not on principle but on politics." With 62% of the country supporting the war back then, this was a risk for a perennial candidate for higher office.

But since he's attained the highest office he has repeatedly elevated those dumb, rash or unprincipled enough to support that war to key foreign policy positions. His vice president, Joe Biden, was one of the Democrats' principle cheerleaders for the war. He kept Bush's defence secretary, Bob Gates, on in the same post, named Hillary Clinton – who considered her support for the war her greatest vulnerability during the Democratic primary – as secretary of state. Now comes Hagel, Kerry and John Brennan – his pick for CIA chief – who was heavily implicated in Bush-era torture programmes and responsible for drone attacks.

As such, Obama's presidency continues to mark not a new narrative to Bush's post-9/11 agenda so much as a more tonally sensitive sequel to it. When, during the presidential campaign, he accused Mitt Romney of wanting to "do the same things we do, but say them louder", he spoke a sad truth. His uncritical evocation of Kerry and Hagel's service in Vietnam as their qualification for serving him now speaks volumes for the nation's inadequacies in processing the fallout of military conflict.

According to Christopher Gelpi, a political science professor at Duke University who specialises in attitudes to foreign policy, the most important single factor shaping Americans' opinions about any war is whether they think America will win. Solipsistic, opportunistic and essentially amoral, the tipping point is not human rights abuses, civilian casualties or even the deaths of American servicemen. It's simply expectations of success. "The American public is partly casualty-phobic but it is primarily defeat phobic," says Gelpi. "You can muster support for just about any military operation in the US so long as you can get enough of the defeat-phobic people on board."

The problem with Vietnam was not the ethical collapse of a political culture that allowed death, destruction and torture on such a massive scale; the problem was defeat. Those who are responsible move on and up. Those who suffer are left down and out. Those with the sketchiest memories move faster and further. Those who force a reckoning with the past either contract the collective, selective, amnesia or are cast aside.

Most of those who voted for war in Iraq now regret their decision. Hagel has been a more been a more critical voice on Iran and Israel and was the most conflicted before Iraq. "How many of us really know and understand much about Iraq, the country, the history, the people, the role in the Arab world?" he asked. "I approach the issue of post-Saddam Iraq and the future of democracy and stability in the Middle East with more caution, realism and a bit more humility." Nonetheless, he is a sorry example for Obama's efforts at bipartisanship.

Eventually, they would all blame faulty intelligence, poor leadership and inadequate planning. All of these problems were real. All were evident before the war. None are adequate excuses. When they had the chance to stop it, they didn't. Questions of foreign intervention can be complex. Iraq was not. Morally, militarily, strategically, politically this was not a tough call.

Most people in the world, regardless of their education, religion or nationality, understood it was a bad idea from the start. Those in power who didn't, couldn't or wouldn't are responsible for the greatest, deadliest foreign policy blunder of at least the last decade. To entrust them with fighting the next war is to forget how we got into the last one.