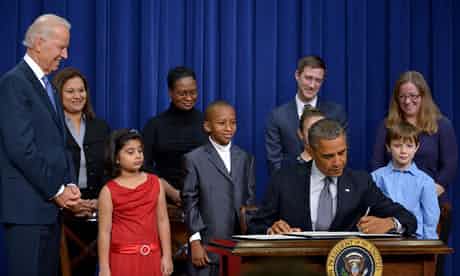 Finally. After years of silence, punctured by sombre responses to predictable slaughter, an American president has made a sober, principled and coherent intervention on the issue of gun control.

Barack Obama called a press conference not to express regret for a tragedy that has happened, while calling for prayers for the victims and their families (as he has done so many times before), but instead to announce a bid to prevent the next tragedy – with a call for action to both Congress in particular and the public in general.

"This will not happen, unless the American people demand it. If parents and teachers, police officers, and pastors, if hunters and sportsman, if responsible gun owners, if Americans of every background stand up and say, enough. We've suffered too much pain, and care too much about our children to allow this to continue, then change will – change will come."

Where photo opportunities are concerned, the press conference was as opportunistic as it gets. Seated in front of young children, little over month after the shootings at Sandy Hook elementary school, President Barack Obama signed 23 executive orders designed to reduce gun violence. The orders, alongside broader legislative proposals, emerged from a task force convened explicitly in response, with recommendations urgently compiled – while the tragedy was still fresh in people's minds.

But the fact that the timing is opportune does not mean the motivation is cynical. On the day of the Sandy Hook shooting, Obama publicly broke down, vowing:

"As a country, we have been through this too many times … And we're going to have to come together and take meaningful action to prevent more tragedies like this, regardless of the politics."

For his tears to mean anything, he had to follow through.

His address implied that, after four long years, he had finally worked out what both the office of the presidency in general and his presidency, in particular, were for. Appealing over the heads of a stubborn and gridlocked Congress to the nation at large, the president sought to rally the nation to both a moral cause and much-needed civic engagement. A recent Pew survey showed that while a majority of the country support gun control, those who oppose it are more than four times more likely to give money to groups that advocate on gun policy, and twice as likely to have contacted a public official about gun policy. With that in mind, perhaps, Obama urged:

"Ask [your member of Congress] if they support renewing a ban on military-style assault weapons and high-capacity magazines. And if they say no, ask them why not? Ask them what's more important: doing whatever it takes to get an A grade from the gun lobby that funds their campaigns? Or giving parents some piece of mind when they drop their child off to first grade?"

While the president's executive orders ranged from the vague ("launch a national dialogue on mental health") to the concrete ("require federal agencies to make relevant data available to the federal background check system"), he called on Congress to ban assault weapons and high-capacity ammunition magazines. He also proposed new laws to close the "gunshow loophole" and require universal background checks for all gun buyers, as well as a crackdown on gun trafficking and resources for mental health and school safety measures.

Change may come, but no one should expect radical progress in legislation anytime soon. Leaders of his own party warned Obama prior to his announcement that many of his most far-reaching legislative proposals have little chance of being passed – even in the Democratic-controlled Senate.

Some, even among gun control advocates, have argued that galvanising the gun lobby without much hope of substantial victory is strategically naive. But that is to forget the longer trajectory of this debate.

For almost two decades, progressives have refused to engage with the issue of gun control for fear of losing. Their absence, though, did not stave off defeat; it guaranteed it. While liberals ceded ground, the NRA and its allies have expanded gun rights in almost every sphere.

The gun lobby may have won on legislation, but they have not won the argument. Even without prominent voices making the case, a plurality of Americans is for greater gun control, and a clear majority is in favour of banning assault weapons. That shows there is an audience out there that can be mobilised. Turning that tide starts not with winning the issue, but by raising it and fighting for it.

Politics may be the art of the possible, but what is possible should not be confused with what is necessary. And leadership, to be worthy of the name, demands the courage and foresight both to imagine new possibilities and to meet the changes that are necessary.

Here, Obama showed leadership. In the weeks and months to come, we'll see how far the country is prepared to follow.