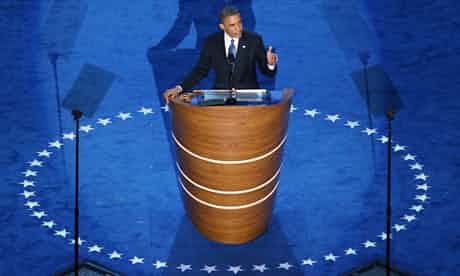 As Obama speeches go it was plodding. As a man whose presidency was launched on a great convention speech, he can do better and we know it. Like a master sculptor he has proven his ability to take the raw material of a political moment and carve it rhetorically into something of aesthetic value that both engages and rouses.

Indeed, for his opponents that has been their criticism: his inspiring words have not been matched by impressive deeds. He can talk the talk. Last night he had to show he could walk the walk.

So fittingly it was a pedestrian address: a deliberate, methodical case for a second term. The best lines had been taken. A nation where people "get a fair shake" and "do their fair share" and everybody "plays by the rules" had been hammered home for the last three days. Both his wife, Michelle, and his surrogate, Bill Clinton, had raised the bar in terms of oratory.

His task tonight, though, was not to excite but to explain and engage. "You could not step twice into the same river," noted the Greek philosopher Heraclitus. "For other waters are ever flowing on to you." As Obama pointed out he is now the president, not a candidate, and the country's in a different place. Those looking for Obama's speech to match the impact of his convention address in Denver in 2008 were always in for a disappointment.

Back in Denver he could stand on his promise. Now he must stand on his record. He had to give a credible account of the last four years and make a case for the next four. Patience is a tougher sell than hope; endurance will always inspire less than change. He spoke not in terms of a grand narrative but discrete chapters: healthcare, women's rights, energy, educate, manufacturing, foreign policy.

"I won't pretend the path I'm offering is quick or easy. I never have. You didn't elect me to tell you what you wanted to hear. You elected me to tell you the truth. And the truth is, it will take more than a few years for us to solve challenges that have built up over decades," he said.

"It will require common effort, shared responsibility, and the kind of bold, persistent experimentation that Franklin Roosevelt pursued during the only crisis worse than this one. And by the way – those of us who carry on his party's legacy should remember that not every problem can be remedied with another government programme or diktat from Washington."

With the convention season over there is little doubt that the Democrats had a better week than the Republicans. They needed it. For all the ways in which Obama outshines Mitt Romney, as a candidate he remains vulnerable. The night that the Democratic convention started one poll showed that a majority of Americans believe the country is in "worse condition" than when Obama accepted the nomination four years ago and he does not deserve a second term.

In an election with few undecided voters he was preaching to the choir. But every choir needs a song to sing. The Democratic faithful have struggled to find their voice against a strident Republican right and stubborn economic ills. on Thursday night Obama was at pains not to promise the earth, but to sound down to earth.

follow on twitter
RT @CLASSthinktank: .@chilledasad100 exec director of @WarOnWant: Covid crisis could mean half of jobs in the Global South could go. We tal…
RT @YouGov: Stay the hell away, Europeans tell British tourists. % opposed to British tourists coming to their country: Spain: 61% (+15…
RT @CLASSthinktank: 🔜TOMORROW 7pm, join our Zoom event 'Covid-19, #BlackLivesMatter & #ClimateCrisis: What It Means For The Left' w/ @labo…
RT @nwynnglos: Horrific statistics from a divided society at war with itself. see @garyyounge Another Day in the Death of America ..
RT @chakrabortty: It is quite possible to believe both that Boris Johnson is the most abject blame-shifter and that care homes are often ru…
RT @poltheoryother: ICYMI 📻 PTO Extra! 📻 Gary Younge on his experience of reporting on racism in the United States for the Guardian, the cu…
My partner, @trexmack , has composed a short piece of choral music (2:43) around the theme of empathy with a virtua… https://t.co/cHItTGyqyR
RT @Blackgermans: Germany Needs to Own Up to the Horrors of Its Colonial Past in Africa https://t.co/xqu8dnK00W
RT @tcmbigcheese: @HackneyAbbott @KanyaKing Our late mum worked for the NHS as well #HappyBirthdayNHS @garyyounge https://t.co/HzbXnmmNQ4
RT @Jliffe: Dangerous Associations Documentary with Gary Younge Intro on Vimeo #jointenterprise ⁦@garyyounge⁩ ⁦@beckyjoyC⁩ ⁦@LucyMPowell⁩ ⁦…
© Gary Younge. All Rights reserved, site built with tlc