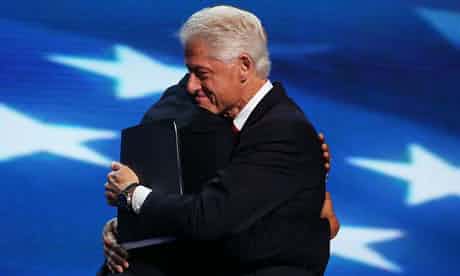 Say what you want about Bill Clinton – and people do – but he gives good convention. And so he should. The last time he didn't address a convention was 1984. He knows which delegates' buttons to press because he sewed so many of them on himself.

Last night, in a long, always spirited and occasionally rambling performance, he reminded the country not just who the good guy is but where the bad times came from.

"In Tampa the Republican argument against Obama's re-election was pretty simple, pretty snappy: 'We left him a total mess, he hasn't finished cleaning it up fast enough, so fire him and put us back in.' I like the argument for President Obama's re-election a whole lot better. He inherited a deeply damaged economy, put a floor under the crash, began the long hard road to recovery and laid the foundation for a modern, more well-balanced economy."

It was a full-throated, at times light-hearted, rousing endorsement of the man who beat his wife in a bitter primary four years ago. Bill Clinton sauntered on stage to his 1992 campaign song: "Don't stop thinking about tomorrow." But the convention hall – clinging to him like a cross-generational comfort blanket – were thinking about two decades ago, a reassuring reminder of what seems like a bygone era when jobs were many, you could get on a plane without first taking off your shoes and white southern Democrats weren't virtually extinct.

His appearance in a primetime slot usually reserved for vice-presidents says more about Obama's vulnerabilities than it does about Clinton's strengths. And those weaknesses have been clear during this convention.

While there is far more enthusiasm in Charlotte than there was among Republicans in Tampa last week, that exuberance among Democrats is far less focused. Republicans trained their sights on the economy, deceptively at times but relentlessly throughout. The Democratic rhetorical fire, however, is dispersed among many targets. Women's rights, union rights, equality of opportunity, healthcare reform, gay marriage, student debt – all get shout outs, all get cheers. There is a theme – fairness – but there isn't a coherent message beyond the threat that under Mitt Romney the country will be less fair.

This is where Clinton comes in. For the problem is not that Barack Obama does not have a record. It's that the record he has does not include the single most important achievement he could hope for: improving the lot of the broad swathe of middle America. It's the one area where voters trust Romney more than him and by far the most important issue in the election.

Clinton bears the imprimatur of economic success. Long after the Monica Lewinsky scandal, Don't Ask Don't Tell, the North American Free Trade Agreement, welfare reform, the repeal of the Glass-Steagall act and the defence of marriage act are forgotten, the memory of a strong economy and a budget surplus on his watch will remain. When the speech was over, Obama came on stage and hugged him as though he were a life raft.

follow on twitter
RT @SRTRC_England: An exciting new role as head of #humanresources at #ShowRacismtheRedCard Please RT. #educatorsjobs @MichaelRosenYes @gar…
“We didn’t ask for Lady Hussey to resign. But, really, the monarchy must do better on race.” Wanting the monarchy t… https://t.co/Pmo9BYdWnf
RT @mikewhoatv: Riz Ahmed nails it…“where are you really from?” https://t.co/vbL0wJr9dW
RT @HertsSid: Lady Susan Hussey at Buckingham Palace be like https://t.co/hmTifZC32r
RT @ilfoglio_it: "Il razzismo c’è ovunque, l’antisemitismo pure, così come le persone mentalmente fragili o gli estremisti politici. Ma sol…
RT @LRBbookshop: This week's podcast is from our event celebrating the life and work of Dawn Foster Friends and colleagues @BizK1, @pierce…
RT @jhalakprize: Submissions for Jhalak Prize and Jhalak C&YA Prize Close on 9th December - https://t.co/yB28egOsIi
RT @eiecampaign: “1 in 3 nurses struggle to heat their homes and keep food on the table. Claps don’t pay the fucking bills.” @ZarahSultana…
RT @flying_rodent: It is remarkable that this - actively fucking over a big chunk of the public, screaming insults at them as loudly as you…
RT @ManchesterUP: Now available as Open Access! Amidst a searing critique of the university's neoliberal and imperial character, Remi Jose…
© Gary Younge. All Rights reserved, site built with tlc
Online doctor paxil cr Cheap doxazosin Cheap generic lotensin Symptoms to get promethazine codeine cough syrup Lotrisone street price Where can you buy cialis Can you take celebrex and naproxen together Cheap clozaril 100 canada Can i buy hytrin How to get a aricept prescription from your doctor