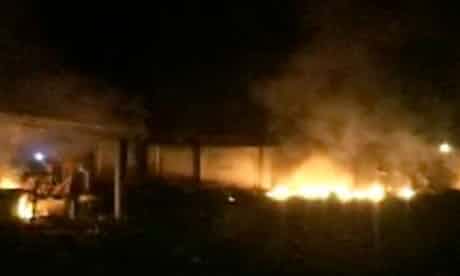 Last week, two coalition troops were injured and one killed by Afghan soldiers; the US reached an agreement with the Afghan government to maintain a presence in the country until 2024; and the US failed to break a diplomatic deadlock with Pakistan after the US refused to apologise for killing 25 Pakistani soldiers in November.

This week, the White House will celebrate the anniversary of the assassination of Osama bin Laden as though it were the crowning achievement of its foreign policy. On Wednesday, Obama will hold a rare televised interview in the situation room to discuss the raid in Abbottabad. His campaign has released of a web video in which Bill Clinton says President Obama "took the harder and the more honorable path, and the one that produced, in my opinion, the best result". The video then asks, "Which path would Mitt Romney have taken?"

The man who entered the White House with the message of "hope" and "change" wants to hold on to it with a record of "shoot to kill".

Republicans are right to criticise the president for the crass manner in which he is "dancing around the end zone". Unfortunately, those criticisms ring hollow from a party whose leader played dress up on the USS Abraham Lincoln to announce the end of a war that is still not over, and whose presidential candidate claims Obama should stop travelling the globe "apologising for" America. Moreover, the problem is not that Obama is exploiting a moment of national unity for partisan gain – though he most certainly is – but that this extra-judicial execution of an unmourned man has proved the only event capable of uniting the country since 9/11.

For, as the events over the last week bear out, beyond avenging the attacks on the world trade centre, the assassination of Bin Laden has achieved precious little. Assassination is not a foreign policy. Nor is it a judicial strategy. Vengeance, however righteous, is not an argument, let alone a plan. The two wars, ostensibly launched in response to 11 September 2001 have been disasters, leaving many more civilians dead than the original act of terror. America's standing around the world has yet to fully recover. The geopolitical relations in the area around Afghanistan and Pakistan remain fragile. Obama's approval ratings spiked for a month after the Abbottabad raid , before dipping back below 50% where they remain.

A message sent to local law enforcement last week by the FBI and Homeland Security stated:

"We assess that al-Qaida's affiliates and allies remain intent on conducting attacks in the homeland, possibly to avenge the death of Bin Laden, but not necessarily tied to next month's anniversary."

Both the fact and the manner of Bin Laden's demise simply proved what nobody ever doubted: America's ability to kill remains intact and unrivalled. Sadly, its ability to prosecute, convict, persuade and develop remains either untested or unproven.

Every time a drone kills a kid in Pakistan, the US creates more terrorists than it can ever hope to prevent through a single assassination. Unlike Trayvon Martin, the dead may not "look like" Obama. But they are still someone's son (or daughter). The episodic atrocities leaked to American newspapers hardly instil confidence in the mission either. Its three principal interventions in the region – Iraq, Afghanistan, Libya – have ended with death of leaders at the hands of mob, hangman or marksman. But none has provided enduring benefits.

That Obama would be unsubtle in making Bin Laden's execution a central element of his reelection strategy was clear from his state of the union speech in January, which both started and finished with a recollection of the Navy Seals' deadly deed. But if anyone was in any doubt, Vice-President Joe Biden last week boasted:

"If you are looking for a bumper sticker to sum up how President Obama has handled what we inherited, it's pretty simple: 'General Motors is alive; Osama bin Laden is dead'."

Simplistic, certainly, but convincing? Hardly. Indeed, if such a bumper sticker, boasting bailouts and bullets, sums up anything, it's the partial and inadequate nature of Obama's tenure that has garnered such disappointment.

General Motors' continued existence is good news for its workers and American manufacturing. But unemployment in Detroit remains at 17.8%. The slogan "America is back" intended to celebrate the recovery polled badly because, given the economic precariousness, few were in a celebratory mood.

Similarly, given his predecessor's incompetence, Obama's accomplishment of Bin Laden's death is an achievement of sorts. When Obama took over, many people asked George Bush's last CIA director, Michael Hayden: "When's the last time you really knew where [Bin Laden] was?" Hayden replied: "Tora Bora in 2001." The trouble is, comparing yourself to Bush sets the bar far lower than the expectation Obama had originally set up.

Since al-Qaida was never a top-down organisation, Bin Laden's assassination does not make much of a dent in the terror threat. So it's an "achievement" that makes little difference to anyone's life, either in Afghanistan, or Pakistan or the US. That's precisely why Obama has to keep reminding people that it happened – but why the benefits of doing so are so shortlived. Because of everything else that's going on – both abroad and at home – it's easily forgettable.

So, let the hoop-la begin and let jingoism reign. Let the cameras roll on the retrospectives, reconstructions and general revelling in the military prowess of a crack squad on a tough mission, launched by the warrior-in-chief who held his nerve. "You wanted cold, calculating; you got cold, calculating," says Bruce Riedel, a senior foreign policy fellow at the Brookings Institution, who has advised the last three presidents on issues relating to the Middle East and South Asia:

And then, let the printers start on the new bumper stickers. Not "Yes We Can", but "Could Be Worse".