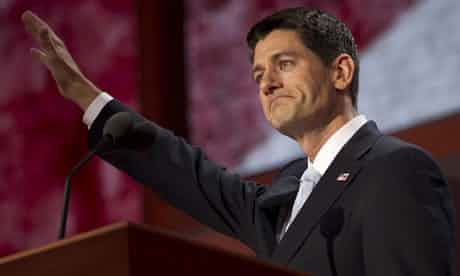 Paul Ryan sets out Romney stall but no one is buying
The Guardian,
Photograph: Benjamin J Myers/Corbis

For a party that has gone to extraordinary lengths to stress its links to small business, Republicans are terrible salespeople. They have had just one task this week: to market Mitt Romney. The trouble is no one's buying it.

At first sight the problem seems to be presentational. The contributions from the stage are wooden; the jokes flat; signs of oratorical flare rare. Time and again with just a handful of exceptions, a speaker came to the podium to great cheers only to dampen the enthusiasm with their actual speech.

Yet the sense you get from the floor is of a party barely going through the motions. Missing their cues to clap and boo, they respond as though they're watching vaudeville by satellite – it's as though they're not even there. Spend an hour on the convention floor in Tampa and you'd be forgiven for thinking the Tea party has switched to decaf.

But as time goes on it's clear that the issue is not presentation but the product. Last night the primary task fell to Romney's vice-presidential pick, Paul Ryan. The public is reserving judgment on Ryan. When Americans are asked what single word best describes Ryan, the four most frequent responses were conservative, intelligent, young and unknown; four years ago the same question with Sarah Palin prompted the word inexperienced.

His selection was expressly intended to fire up the base. Looking scarcely old enough to vote, let alone stand as vice-president, Ryan did everything he could to promote his new boss. Singing his virtues, praising his record and gently chiding his iPod playlist like a cheeky son.

"His whole life has prepared him for this moment – to meet serious challenges in a serious way, without excuses and idle words," he said. "After four years of getting the runaround America needs a turnaround, and the man for the job is governor Mitt Romney."

The trouble is Romney is proving just too tough a sell. A poll released on the day he was nominated revealed that Romney is the least popular nominee of a major party in almost 30 years. So tough in fact that even when the Republicans do buy it they won't wear it. A poll last month showed a significant enthusiasm gap between Republicans and Democrats. Republicans in three swing states – Florida, Ohio and Pennsylvania – found supporters who "strongly favoured" Romney trailing Obama supporters who "strongly favoured" the president by double digits.

Ryan's was not the only good speech. The former secretary of state Condoleeza Rice raised the roof and Rand Paul was well received. But even when the speeches are good the effect is not to shine a light on Romney but to leave one wondering why so many others did not step out of the shade. They left the crowd wanting more. Just not more Romney.

Two of the other speakers last night were Romney's 2008 rivals Mike Huckabee and John McCain. After Huckabee beat Romney in Iowa back then he reportedly called McCain ahead of the New Hampshire primary. "Now it's your turn to kick his butt," he said. Last night they they sought not to kick it but to cover it. To sell the candidate they have, because they couldn't have the candidate they want.