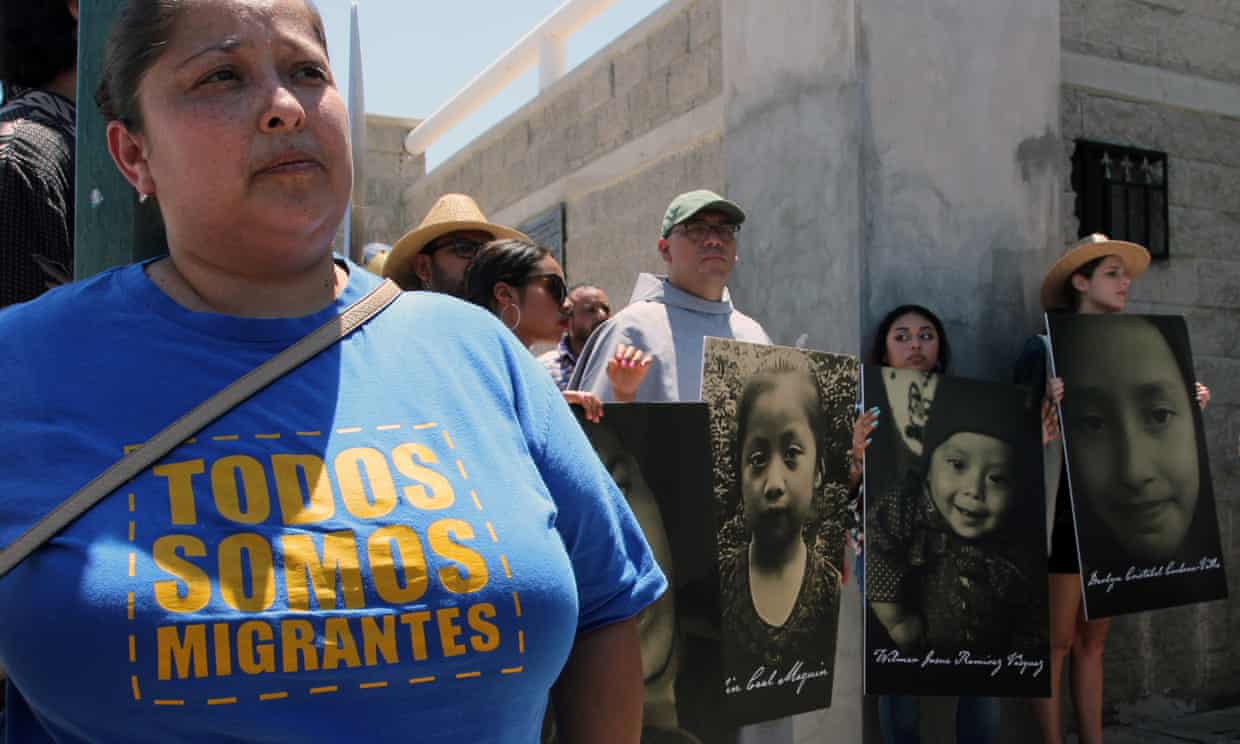 Pictures of dead migrants inspire our sympathy. But what use is that to them?
The Guardian,
Photograph: Hérika Martínez/AFP/Getty Images

On the morning of 17 January 2018 a humanitarian group, No More Deaths, released a report showing how, over four years, US border patrol agents had destroyed 3,856 gallons of water that had been left for migrants in the desert.

That afternoon, Scott Warren, a No More Deaths volunteer, was arrested for bringing food, water, bedding and clean clothes to two men who had entered the country illegally. He found them in an area where 32 bodies had been recovered in the previous year alone.

Charged with conspiracy to transport and harbour migrants, he faced up to 20 years in prison. Earlier this month his trial ended in a hung jury.

Put differently, an American jury was asked whether, in effect, it should be illegal for one human being to provide basic sustenance to preserve the lives of other human beings in desperate need – and it could not quite make up its mind. (The jury was deadlocked, having split 8-4 in Warren’s favour. The state will decide whether to try him again next week.)

So when we see a photograph of the lifeless body of 26-year-old Salvadorean Óscar Alberto Martínez Ramírez, clutching his dead 23-month-old daughter, Angie Valeria, face down in the Rio Grande, it is important to decipher exactly what the source of the shock might be.

As Warren’s case illustrates, such deaths are not news in the conventional sense, any more than the police shooting black men in the street in the US is “news”. In the absence of mass protest there is a level of racialised suffering that rarely exceeds the status of white noise in the west. Not only do we know these things happen and have been happening for a long time; we know they don’t happen by accident, and could be prevented if we, as a society, had the will to do so. There is pathos in the suffering, but there is policy behind it too.

The tragic image is news because the basic humanity of those who perish has been so routinely denied that the evidence that they are not “cockroaches”, “animals”, “aliens”, “illegals”, rats or vermin but actual people feels genuinely novel – it provides an empathic injection into the morally sclerotic vein of a dehumanised political culture.

This was a father and daughter, holding on to each other until the very end: tender, vulnerable, heartbreaking. In a sense this is the problem. If for the stories of their lives to break through in the mainstream they must first be dead, what use is it to them? The fact that they are objects of pity, shame or even anger does not make them any less objects ripe for our projection.

Empathy could be the first step to solidarity – click, share, engage. Warren must have been conscientised and radicalised somehow. In 2006 I drove all the way up the US-Mexican border from Brownsville, Texas, where Angie Valeria and Óscar were found, to San Diego. On the way I spoke to Armando Alarcón, who was carried over the Rio Grande by his father when he was Angie Valeria’s age. When Alarcón saw a news story about the body of an eight-year-old girl found by a border patrol after she had been abandoned by her smuggler, he bought a Cessna 172 plane and founded a group called Paisanos al Rescate – Fellow Countrymen to the Rescue. 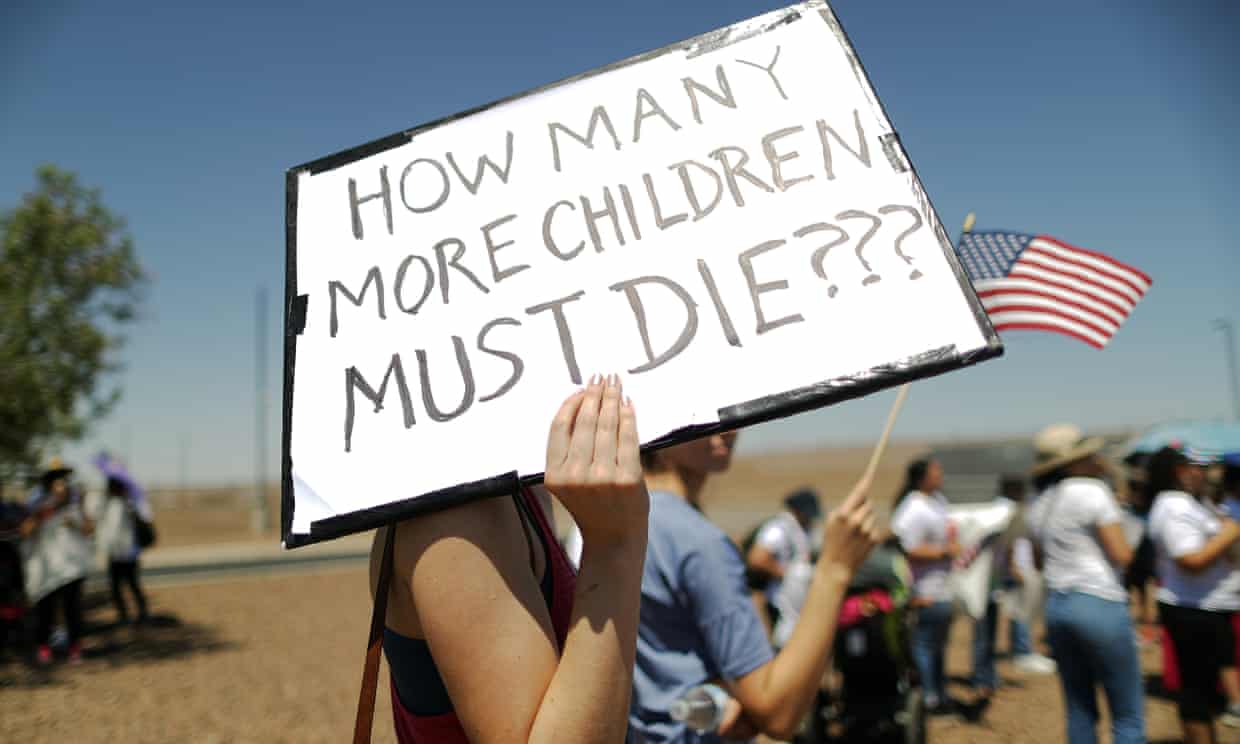 Protesters demonstrate in front of the US border patrol facility where lawyers reported that detained migrant children were held unbathed and hungry. Photograph: Mario Tama/Getty Images

Alarcón and his fellow humanitarians flew over the border with two-litre bottles of water, looking for migrants who were crossing. The bottles had parachutes attached, and little diagrams explaining the immigrants’ options. If they were in trouble and wanted to be rescued, they should lie down and the pilot would call the border patrol; if they didn’t want to be rescued, they should stand up and wave, and the pilot would drop more water and move on.

“The majority who die out there are old people and little kids,” said Alarcón. “I just don’t care really what people say about it or if they don’t like it. It’s humanitarian work. It’s not illegal.” It wasn’t then. It could be now.

But all too often, these moments stop at the performative outrage of clicking and sharing. Those who hope the picture of Óscar and Angie Valeria will have the same impact as the picture of Alan Kurdi, the three-year-old Syrian child whose body washed up on the Turkish coast, should be careful what they wish for. For an intense period Kurdi’s image stoked interest and anger, donations to refugee groups rose, xenophobic rhetoric was toned down. But soon, things returned to abnormal. Support for far-right parties grew, donations fell, policies reverted.

There are two other things we can learn from both Alarcón and Alan when it comes to this picture.

The first is that it is bigger than just Donald Trump. There is a lot we can and should blame Trump for when it comes to the treatment of immigrants. This is the man who has galvanised popular xenophobia to obscene levels, and separated children from their parents at the border. An Associated Press report earlier this month from a Texas border patrol station described how a guard had handed a few girls, aged between 10 and 15, a two-year-old boy to look after. When the legal team saw him he was wearing a mucus-stained T-shirt but no nappy, and had wet himself.

That same week a government lawyer, Sarah Fabian, told a three-judge panel at the circuit court of appeals in San Francisco that soap and beds were not essential for detained migrant children.

But the truth is that while Trump has exacerbated a bad situation, he did not create it. Back in 2006 the author and lecturer Mike Davis, who lives in San Diego, described the border to me as “the most extreme economic precipice on the planet”.

The second is that this is bigger than just America. A German rescue boat brought 42 shipwrecked refugees into Italy earlier this month, prompting threats of fines from the Italian government. Four years ago the British government persuaded the rest of Europe to stop supporting search and rescue missions for sinking vessels because it was a “pull factor”. When they stopped trying to save drowning people, they duly drowned.

This is a global tragedy. Just as Trump has his counterparts in power in Hungary, Australia, Italy and Britain, so Óscar and Angie Valeria have their peers in Syria and Libya, and at the bottom of the Mediterranean and Caribbean seas. People are not simply seeking a better life. They are also fleeing a worse one, in which we are implicated. All too often they are fleeing dictators we are propping up, wars that we have started, weapons we have sold in regions we have destabilised, environmental chaos we have unleashed and poverty we have either bequeathed or imposed. There is pathos in this, but there is policy behind it. They don’t need our sympathy, they need our solidarity.