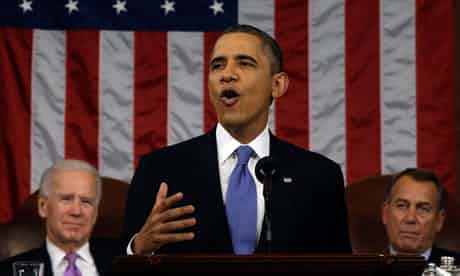 As an agenda, it was impressive. Jobs, immigration reform, climate change, equal pay for women, the minimum wage, troop withdrawal, universal pre-school provision for the poor, gun control, voting reform – this was unapologetic in its liberalism and unstinting in its determination.

"If Congress won't act soon to protect future generations, I will," President Obama said, of the battle to control climate change.

But as a speech, it was lousy. State of the union addresses are supposed to be soaring, rousing, big-picture affairs: thematic in tone and schematic in vision, they give presidents a captive audience to talk not just policy but trajectory – whether it's healing the world, conquering space or reshaping the nation.

But if this was grand in its range, it was small in its vision. A laundry list of good proposals peppered with references to tax codes, research and development, 3D printing and more powerful batteries.

While few progressive stones were left unturned, more than a few were lobbed directly across the aisle.

"The greatest nation on Earth cannot keep conducting its business by drifting from one manufactured crisis to the next," he said, aiming fire at Republicans dancing dangerously close to another fiscal cliff.

"The American people have worked too hard, for too long, rebuilding from one crisis to see their elected officials cause another."

He went on to taunt climate change deniers.

Too dull for a campaign speech, too partisan for patriotic fanfare, it fell somewhere in between and landed with a thud. His supporters, of course, will have loved it. But few will remember it.

It had its moments. Obama's refrain on the victims of gun violence was powerful and inspiring.

"I know this is not the first time this country has debated how to reduce gun violence," he said, referring to the tragic mass shooting at Sandy Hook. "But this time is different."

Then, imploring Congress to at least put proposals on gun control to the vote, he began an incantation that began with the parents of Hadiya Pendleton, the teenager killed less than a mile form his Chicago home.

His voice rising with the name of each tragedy, this was as audacious an appeal to tackle what was once a taboo in American politics as you're likely to see. When he shone the spotlight on Desiline Victor, the 102-year-old woman from Miami who waited hours to vote in November, he also brought a sense of purpose both to the room and the event.

Unfortunately, he saved these most rousing moments until the end. And it was there, just as he was to finish, that we learned that the speech we had been listening to was supposed to have had a unifying theme: active and engaged citizenship.

"We are citizens. It's a word that doesn't just describe our nationality or legal status. It describes the way we're made. It describes what we believe. It captures the enduring idea that this country only works when we accept certain obligations to one another and to future generations; that our rights are wrapped up in the rights of others; and that well into our third century as a nation, it remains the task of us all, as citizens of these United States, to be the authors of the next great chapter in our American story."

Coming so soon after his inauguration, it might be too much to expect two rhetorically rich speeches in such quick succession. This was not a president who was out of ideas or lacking in ambition; but it was a speech without much of a coherent direction.