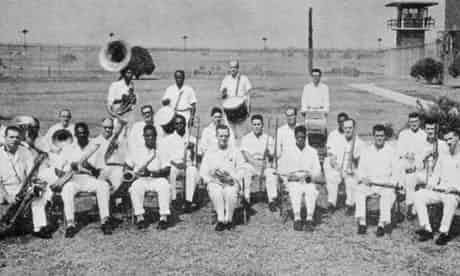 The huge prison that dominates downtown Huntsville, Texas, is so intimately embedded into the life of the town that the rituals associated with it barely register. Every couple of hours a whistle blows marking the moment at which the prisoners are counted to make sure none have escaped. Roughly twice a month, when there are executions, vigils are held at the gates.

But there was one aspect of the rodeo in later years that stood out: the music. The prison had a band that could rival many professional outfits, and actually made records for commercial release to what prisoners called "the free world". "It was the highlight for me. They really were outstanding and we were quite amazed at that," recalls Linda Pease, another diner. "Sometimes they would come down to the square on a flat-bed trailer and play."

The music programme that made it possible marked a shift from an era of naked brutality, dramatised by the film Shawshank Redemption, to rehabilitation. The man recruited in the early 1970s to take it to the next level was an former band player called Harley Rex, who set up a recording studio at the Wynne Unit, another prison outside town. "I designed the whole thing. We had recording studios and practice rooms, and all the modern equipment we could get at the time." One of the first records they released was Behind the Walls with the Outlaws.

Entering the Wynne Unit today through a series of checkpoints and barred gates, Rex is stunned at how security has been ramped up. "Back then, you just walked through the front gate," he says. The first thing you see now is a sign saying: "Wisdom comes more from living than studying." Walking from block to block, you can hear prisoners calling to each other.

Rex recalls holding a contest every year when he would pick the best 20 records. Most have a big-band sound with a soulful lilt. "The music was written, composed and performed by the inmates," he says. "They were equal to anything coming out of Houston. We'd send them down to Beaumont and they would produce about 10,000 records at the first printing."

Playing in the band was a privilege – a creative respite from the drudgery of laundry and other prison tasks – and Rex had his pick. "Out of 100,000 inmates I found about 5,000 who could play. When I got in there, my job was to interview them." Rex's job was made easier by drug laws that put many musicians in jail for marijuana possession.

John Indo, 64, was one of the lucky ones. A talented trumpet player, who spent 17 years inside for murdering his parents after years of abuse, he says playing in the band gave him hope. "It was wonderful ... We went to band [practice] for the first half of the day. I don't know how well it sold but it gave me a sense of communicating and being in connection with the outside world. We were doing something that was worthwhile. We were participating in something that is mainstream, it's just not stone and steel as it is in the prison. It keeps your eyes on the outside."

The rodeo ended when the Texas prison system refused to pay to refurbish the stadium. The music programme died through budget cuts. While it had been most public in Texas, thanks to the rodeo, it was also practised elsewhere in the country. Across the country in Rahway prison, New Jersey, Reginald Haynes was in prison for armed robbery.

"I pretty much knew my life was over. I knew I had to do something and singing was something I could do. I found a couple of guys and we formed a group just to pass the time."

They won the prison talent contest. The next year they met the man who became their manager and producer, George Kerr, a respected figure in the music industry who produced the O'Jays. "They knocked me off my feet," says Kerr in a radio interview and he petitioned the prison, which had just had a huge riot and needed to soften its image. Not as well equipped as Huntsville, Kerr set up the studio in the sex offenders' unit – the only part of the prison that had soundproof rooms.

When Haynes first heard his band, the Escorts, on the radio, he was taken aback. "We just couldn't believe it," says Haynes, who still tours with his reformed band, the Legendary Escorts. "Here we were behind a 30ft wall listening to ourselves on a radio station in the free world and thinking that hundreds of thousands of people were listening to us at the same time."

The title of the song? "All we need is  another chance."

follow on twitter
RT @MCRSociology: Gary Younge discusses identity politics and America with Will Hutton in this episode of @thewesocietypod https://t.co/72…
RT @mart_welton: Congratulations to all those getting their A-level results today. If you have BBB at A-level or above you can still apply…
RT @BernardineEvari: Please follow the groundbreaking online #MuseumofColour UK, founded by the unstoppable Samenua Sesher. The 1st gallery…
RT @EthnicityUK: Gary Younge is interviewed by @sonikkalogan about his work on racism and gun violence in @the_hindu #DataPoint podcast. h…
RT @thefreedomi: 🚨 NEW: Saudi women’s rights activist & academic Salma al-Shehab was sentenced to 34 years in prison + 34 year travel ban f…
RT @LRB: #DawnFosterForever! On Thursday 15 September at the @LRBbookshop, @BizK1, @piercepenniless, Lynsey Hanley and @garyyounge will d…
RT @ShowunmiV: This is how we support Black women and girls https://t.co/8YmgV21zHo
RT @sonikkalogan: It's #DataPoint Pod Thursday! In this week's episode, I talk to @noraneus, @garyyounge and @Casey_J_Wooten about the U.S.…
RT @bgnoiseuk: Next month, @LRBbookshop will host an event to celebrate the life and work of Dawn Foster with @BizK1, @piercepenniless, Lyn…
Help me Twitter. The quote: ""You can cut all the flowers but you cannot keep Spring from coming." is most commonly… https://t.co/Xs7JkiOEd5
© Gary Younge. All Rights reserved, site built with tlc
Pradaxa 150 costo Online doctor paxil cr How to order cefzil online Get propranolol Mirapex online without prescription Tetracycline online kaufen Generic zithromax prices Lipitor sales 2020 Zyloprim pills online Can you buy mobic over the counter usa