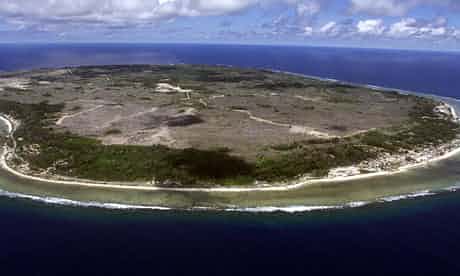 Refugees: a problem that won't go away
The Guardian,
Photograph: Torsten Blackwood/AFP/Getty

In early September 2001 a group of mostly Afghan refugees on board a Norwegian freighter sought asylum in Australia from the Taliban. The Australians refused to let them in, in contravention of international law, and instead parked them for processing on the island of Nauru. Less than a fortnight later, a nation not vicious enough to protect refugees from was deemed dangerous enough to bomb. After the terror attacks on 11 September, Australia sent its troops to Afghanistan. In 2003, when some of the asylum seekers went on hunger strike to protest at their treatment, an Australian immigration department spokesman accused them of blackmail and said they should return to Afghanistan – the nation his country, among others, was bombing – and "get on with their lives".

This glaring contradiction highlights one of the crucial problems regarding the discussion and debate over refugees and asylum seekers today. Alongside decent pensions, a welfare state and the right to a free education, one of the most pernicious attacks on the postwar consensus has been the concerted and largely successful effort to undermine universal human rights in general, and the right to refuge in particular.

The present right to asylum, underpinned by international law, emerged primarily as a result of the Holocaust, when Jews were turned away from many countries (most famously the St Louis ship that was refused the right to dock in the US and Cuba and forced back to Nazi Germany in 1939) and effectively sentenced to death.

But in the past 20 or so years we have reached a place where certain people are not deemed worthy of those basic rights. The world is full of people at present who are struggling to assert their identity not just as part of a particular demographic group but as human beings. This basic measure was what the UN charter was supposed to enforce. But in a period of massive global inequalities, war and environmental disaster, the western governments succumbed to populist pressure – encouraged in no small part by sections of the media – to violate their international obligations. We are now at a point where European governments, including our own, are sending back unaccompanied children to a country (Afghanistan) that after almost nine years they admit they cannot militarily secure.

The western world is full of people who are excluded precisely because they have no valid identity. In France they formed a movement of sans-papiers – literally, "without papers". In the US, liberals call them "undocumented workers"; to conservatives they are just "illegals".

Hundreds of thousands, if not millions, roam the globe without papers, citizenship or rights. They disappear into low-wage economies, torture cells and immigration holding pens and reappear in destitution, frozen to death in the cargo holds of planes or released without charge after years of detention and cruelty. The inhumane conditions in which they live have become a banal fact of the 21st century. In 2009 more than 100 immigrants, a quarter of them children, were found living in a sewer system under Rome's railway stations.

The primary defence of nations who have either made receiving asylum a punishing and degrading process or are refusing it altogether is that most refugees are not fleeing war and persecution but poverty. They are not political asylum seekers, they say, but economic. There is no doubt that there is some truth in this. But the reason they are economically poor is in no small measure because of our politics. Neoliberal globalisation and the trading imbalances that come with it, the colonial legacy, unnecessary wars (Britain has helped create far more refugees from Iraq than it has taken in) and climate change are among the primary reasons why people who live on less than $2 a day are forced to move.

The distinction between the political and the economic is far from irrelevant – particularly in legal terms – but nor is it as clear-cut as is made out. Our politics has reached a stage where it is commonly agreed that poor people should not be free to travel around the world. Either way, the fact remains that fortification, incarceration and deportation offer no solution to these global problems. Instead they attempt to isolate us from misery – much of which we have helped create – and thereby deny our common humanity.