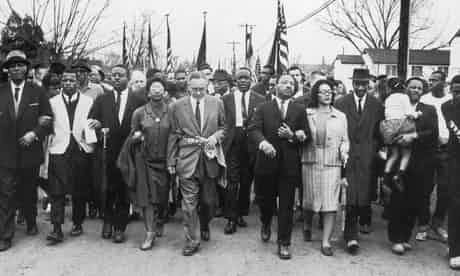 The Saville report is for all our Bloody Sundays
The Guardian,
Photograph: William Lovelace/Getty

At the foot of St Edmund Pettus Bridge in Selma, Alabama, a plaque stands to honour the 600 protesters who were trampled, truncheoned and teargassed by state troopers on 7 March 1965. It took place seven years before the events on Derry's Bogside, which sparked today's Saville report. They called it Bloody Sunday.

The existence of the plaque and the name given that event illustrate two factors about both the day and its legacy – one interesting, the other important.

The important point is that the plaque – a marker set up by the Alabama Historical Commission, which acknowledges wrongdoing – suggests a crucial difference in the way that America addresses its history compared to Britain.

For all the very real problems, lapses and egregious omissions, the US has a proven ability to admit a specific wrongdoing so that you may still retain some faith in the country's broader ideological narrative. Such an approach suggests that the nation's political culture is underpinned by a notion of right and wrong. By admitting it has been wrong, it has the ability to claim that it has also been right.

This does not make American history more morally acceptable. But it does make the official versions of it more believable and offers the chance for Americans to engage in some reckoning with their past.

Britain has always had a problem when it comes to addressing uglier parts of its recent history. The last time I visited Derry, the only markers to the events of 1972 were those erected by the nationalist community – suggesting that the losses they suffered are not shared by us as a nation, but particular to them as a group.

This is not only a problem for those who live on the Bogside – or anywhere else – but for all of us, since it leaves us with an inherently dishonest understanding of our place in the world and in history. The Saville report has the potential to help us not by guilt but by intellect, to redefine who we are through what we, as a nation, have done.

"I inherit from the past of my family, my city, my tribe, my nation a variety of debts, inheritances, rightful expectations and obligations,'' writes Alasdair MacIntyre in his book, After Virtue: A Study in Moral Theory. "I am born with a past and to try to cut myself off from that past is to deform my present relationships. The possession of an historical identity and the possession of a social identity coincide.''

It's one of the reasons why even though various elements of American society might feel alienated in all sorts of way, patriotism remains strong.

The absence of any common marker in Derry indicates how, in the United Kingdom, there is no such distinction. For when a nation rarely admits it has done wrong, even in the face of undeniable evidence, it denies the opportunity for any critical support. You can either believe in the whole or you can reject the whole. You cannot take it in parts.

For all the talk of the financial costs of this report, the psychic costs of not reckoning with our past are much greater.

Events in Northern Ireland over the last decade suggest that, as a country, we have found a way to move on, if not completely resolve, the symbolic ramifications of these moments with substantial political progress.

As my colleague, Richard Norton-Taylor said on The Today programme, the report offers the possibility truth after reconciliation.

To that extent, we are in fairly good company. For the interesting point is that, over more than a century, the term "Bloody Sunday" has essentially been branded, lending events in the North of Ireland some global resonance.

Quite what it is that would prompt acts of state violence in the face of organised resistance to take place repeatedly on the day of rest through the years is unclear. My guess is that this would be the best day to rally the poor to protest, as it would be the least likely day that they would have to work. But Derry's was not the first Bloody Sunday. Indeed, nor was Selma's.

The first was in 13 November 1887: a demonstration in London against the Coercion Acts in Ireland and for the release of an Irish nationalist MP from prison, which ended in violence but no deaths. In 1905, The Tsar's imperial guard opened fire on peaceful protesters in St Petersburg, killing around 100. In 1920, the IRA killed 14 British agents, informers or auxiliaries: the British responded by killing 14 Irish civilians at a Gaelic football match at Croke Park in Dublin on the same day. In between, came Bloody Sundays, with varying degrees of casualties, in South Africa (1900), Washington, DC (1916), Belfast (1921), Vancouver (1938), Bydgoszcz, Poland (1939), Istanbul (1969) and, more recently, Lithuania (1991).

With a few exceptions, all of those countries are still struggling in some way with the issues that produced their own Bloody Sundays. In this respect, we are no different. The public response to the report, however, might show that we can be better.