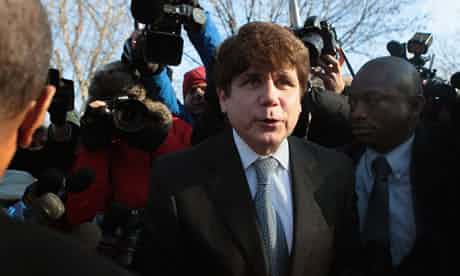 Pity the voters of the great state of Illinois. For if the electorate really do get the leaders they deserve, these people must have done something terrible in a former life. They've had eight governors in the past 50 years, excluding the incumbent, Pat Quinn. After today, half of them have been behind bars. It's been a bipartisan effort. George Ryan, the former Republican governor, is still inside for funnelling millions in contracts to friends and supporters in return for cash and holidays. He has been joined by Rod Blagojevich, his Democratic successor, who on Wednesday was sentenced to 14 years in prison for corruption.

Blagojevich was elected promising to end "pay-for-play" politics, only to be caught red-handed trying to sell a Senate seat to the highest bidder. The seat in question was vacated by president Barack Obama when he won the presidency. Blagoyevich was caught on tape telling one aide: "I've got this thing and it's fucking golden, and I'm just not giving it up for fucking nothing. I'm not gonna do it."

After a first trial last year ended deadlocked on all but one count – lying to a federal agent – this most recent re-run has concluded with a guilty verdict in 17 corruption-related charges.

Blagojevich's legal team had argued for leniency, claiming he was led astray by scheming underlings. Prosecutors, who pushed for a sentence of 15-20 years, were having none of it. Nor was district judge James Zagel. "I do believe that is absurd to contend that his staff and advisers would devise criminal schemes whose only aim was to benefit the defendant. He promised them nothing. He was interested in himself."

The defence claimed a long sentence would be disproportionate when compared to similar infractions by other politicians around the country.

"He asked for a job in return (for President Barack Obama's former US Senate seat)," conceded his attorney, Sheldon Sorosky. "That's all he did at first. We accept that that's a crime. He did it and he should not have done it (but) that crime does not call for a 15-year jail sentence."

They got his teenage daughters to write in saying how much she would miss their dad, while Patti his wife asked "humbly" for the judge to be "merciful". This is the same less-than-merciful-sounding Patti Blagojevich who is heard on the FBI tapes encouraging her husband to prevent the Tribune Company from selling the Chicago Cubs and Wrigley Field unless the Chicago Tribune newspaper fired editorial writers advocating her husband's impeachment. "Hold up that fucking Cubs shit," she says. "Fuck them."

Rod Blagojevich came into politics thanks to his wife's family. Her father, Richard Mell, was a Chicago alderman and part of the powerful Cook county Democratic machine. "Rod's marriage to her is really what begins his political career," said John Pelissero, a political science professor at Loyola University, told the New York Times. "It was really through connections with his father-in-law's influence that he got elected."

Since he was removed from office by the Illinois senate, both Rod, who boasts a mop of hair that would put Mitt Romney to shame, and his wife have tried to leverage their new circumstances to their advantage.

In 2009 he asked Zagel if he could ease travel restrictions so that he could travel to Costa Rica to participate in I'm a Celebrity, Get Me Out Of Here. When the judge said no, his wife took his place and ate a dead tarantula. Since then he's been on the Celebrity Apprentice and made an appearance at Wizard World Chicago. In an interview with Esquire last year he said: "I'm blacker than Barack Obama. I shined shoes. I grew up in a five-room apartment. My father had a little laundromat in a black community not far from where he lived. I saw it all growing up."

follow on twitter
RT @MCRSociology: Gary Younge discusses identity politics and America with Will Hutton in this episode of @thewesocietypod https://t.co/72…
RT @mart_welton: Congratulations to all those getting their A-level results today. If you have BBB at A-level or above you can still apply…
RT @BernardineEvari: Please follow the groundbreaking online #MuseumofColour UK, founded by the unstoppable Samenua Sesher. The 1st gallery…
RT @EthnicityUK: Gary Younge is interviewed by @sonikkalogan about his work on racism and gun violence in @the_hindu #DataPoint podcast. h…
RT @thefreedomi: 🚨 NEW: Saudi women’s rights activist & academic Salma al-Shehab was sentenced to 34 years in prison + 34 year travel ban f…
RT @LRB: #DawnFosterForever! On Thursday 15 September at the @LRBbookshop, @BizK1, @piercepenniless, Lynsey Hanley and @garyyounge will d…
RT @ShowunmiV: This is how we support Black women and girls https://t.co/8YmgV21zHo
RT @sonikkalogan: It's #DataPoint Pod Thursday! In this week's episode, I talk to @noraneus, @garyyounge and @Casey_J_Wooten about the U.S.…
RT @bgnoiseuk: Next month, @LRBbookshop will host an event to celebrate the life and work of Dawn Foster with @BizK1, @piercepenniless, Lyn…
Help me Twitter. The quote: ""You can cut all the flowers but you cannot keep Spring from coming." is most commonly… https://t.co/Xs7JkiOEd5
© Gary Younge. All Rights reserved, site built with tlc
How to get mirapex online How to buy cheap lotensin How to order pentasa online Where can you buy requip over the counter Nitrostat online canada Buy real combivir online Purchase flomax Online doctor geodon How to get jalyn in the us Can you buy avalide over the counter usa