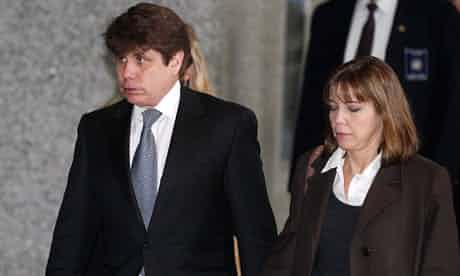 A district judge ignored pleas for leniency as he sent the former governor of Illinois, Rod Blagojevich, to prison for 14 years for trying to sell a vacant seat to the US Senate.

Under federal rules Blagojevich must serve just under 12 years at the very least – almost twice as much as his predecessor, George Ryan, who was imprisoned for six years for his corrupt activities as governor.

The judge said a harsh penalty was necessary because Blagojevich had "torn at the fabric" of the state and left it disfigured by trying to secure a high-paying job or campaign funds through his power to appoint someone to Barack Obama's vacant senate seat. Blagojevich does not have to report to federal prison until 16 February.

As the judge announced the sentence, which includes a $20,000 fine, Blagojevich hunched forward and his face appeared frozen. Minutes later, his wife, Patti Blagojevich, stood up and fell into her husband's arms. He pulled back to brush tears off her cheek and then rubbed her shoulders.

On his way out of the courthouse, Blagojevich cited Rudyard Kipling and said it was a time to be strong, to fight through adversity and be strong for his children. He said he and wife were heading home to speak to their daughters, and then left without answering any questions.

Blagojevich, who generally cuts a swaggering figure, had delivered an abject and craven apology for his actions in the hope that the judge would be lenient.

"I'm here convicted of crimes," he said. "The jury decided I was guilty. I am accepting of it. I acknowledge it, and I of course am unbelievably sorry for it. I want to apologize to the people of Illinois, to the court, for the mistakes I have made … I never set out to break the law. I never set out to cross lines.

"My life is in ruins. I have nobody to blame but myself for my stupidity and actions … I'm not blaming anybody. I have accepted responsibility for it. "

But the prosecutor, ignoring pleas of mercy from both Blagojevich's wife and children the previous day, asked for the stiffest sentence possible. "The defendant's criminal activity corrupted the decision-making process of Illinois," said assistant US attorney Reid Schar. "His criminal activity has further eroded the public's confidence in government and government officials."

Blagoyevich sipped on Cherry Coke while waiting for the judge's decision. It was a harsh sentence. Judge James Zagel insisted that Blagoyevich's crimes went beyond what money to the basic issue of public trust and accountability.

"The harm is the erosion of public trust in government," Zagel said. "If a state senator takes a bribe, it's one person out of 59 … You are not to be compared with those of lesser positions in government. You as a governor are seen to control all of government.

"The fabric of Illinois is torn, disfigured and not easily repaired. You did that damage."

Blagojevich's sentencing came just days before his 55th birthday on Saturday, and nearly three years to the day of his arrest at dawn on 9 December 2008, when the startled governor asked one federal agent: "Is this a joke?" In a state where corruption has been commonplace, images of Blagojevich being led away in handcuffs still came as a shock.

It took two trials for prosecutors to snare Blagojevich on sweeping corruption charges. His first ended deadlocked with jurors agreeing on just one of 24 counts – that Blagojevich lied to the FBI. Jurors at his retrial convicted him on 17 of 20 counts, including bribery and attempted extortion.

FBI wiretap evidence proved decisive. In the most notorious recording, Blagojevich is heard crowing that his chance to name someone to Obama's seat was "fucking golden" and he wouldn't let it go "for fucking nothing."

Blagojevich clearly dreaded the idea of prison time. Asked in an interview before his retrial about whether he dwelt on that prospect, he answered: "No. I don't let myself go there."

In the same interview, Blagojevich also explained that the family dog Skittles was bought after his arrest to help his school-age daughters, Amy and Annie, cope with the stress of his legal troubles. He said he joked with them that "if the worst happens (and I go to prison), you can get another dog and call him Daddy."

While Blagojevich will likely end up at a minimal security prison, he'll be largely cut off from the outside world. Visits by family are strictly limited, Blagojevich will have to share a cell with other inmates and he must work an eight-hour-a-day menial job – possibly scrubbing toilets or mopping floors – at just 12¢ an hour.

follow on twitter
In Northern California? I'll be talking about guns, kids and the American narrative @ucdavis… https://t.co/Y17BZabNEe
RT @JuventudRebelde: El 23-11-2013 murieron 10 adolescentes por armas de fuego en EE.UU. El más pequeño tenía 9 años; el mayor 19. La prens…
RT @rapclassroom: What is the relationship between the conversations we share and the stories we tell? Join @garyyounge @NesrineMalik Adam…
RT @rapclassroom: I'm doing an event on March 19th at Amnesty with @garyyounge @NesrineMalik and Adam Ferner. We'll be discussing the possi…
RT @CLASSthinktank: Catch Gary Younge talk about how we get our message across in a hostile media environment. Join us for conference to g…
RT @StreetDoctors: @garyyounge Every day a young person is stabbed on our streets. #ApplyPressure shows young people what to do if someone…
RT @ppvernon: @MsSDuggal @WordsofColour @AndreaEnisuoh @MsJoyFrancis @courttianewland @DredaMitchell @kadijattug @leedanielsent @brixtonbar…
RT @typemediacenter: “[Stormzy’s] political voice is central to his meaning both as a public figure and a performer,” writes @garyyounge in…
RT @eldiarioes: ADELANTO EDITORIAL | 'Un día más en la muerte de EEUU': rescatar del olvido las historias de 10 adolescentes asesinados htt…
RT @disruptionary: It was 2002. My dad was stop & frisked for having a Muslim name. He was detained w/o a phone call to his family for…
© Gary Younge. All Rights reserved, site built with tlc