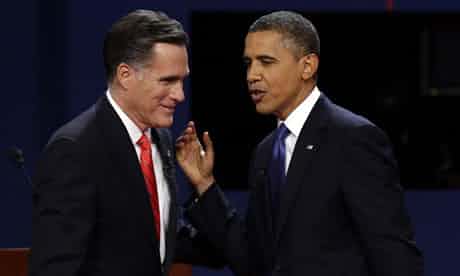 Romney gets off the ground in a presidential debate light on zingers
The Guardian,
Photograph: Charlie Neibergall/AP

In the end there were no zingers; no knockout blows; no major blunders. But there was a winner: Mitt Romney. After several reboots and roll-outs he finally, finally found his voice. He wasn't likeable, but he was believable. Gone were the gaffes, the stiff, wooden persona and the excessive caution. He came out fighting and he kept on swinging.

Fluent, strident, confident – he made his case.

Barack Obama on the other hand appeared nervous, distracted and unprepared. After four years in the Oval Office, he'd lost his voice. Gone was the charisma, the optimism and the eloquence. Defensive, halting and verbose – he looked tired and that made his presidency look tired. Both campaigns set low expectations, but only Obama met them. If you were watching without knowing who was the president, you wouldn't have guessed it was him.

Poorly moderated and often wonkish, the debate frequently got swamped in the kind of detail that few could follow and with charges and counter-charges that few could immediately verify.

Obama did have his moments, like when he pointed out that Romney provides few details of what he's going to do, or that he was the hostage to the extremes in his party he connected. But even when he won on substance he lost on style, his punch lines lost in waffle or his main points hidden behind statistics. Not once did he mention Bain Capital or Romney's 47% blunder, even when the questions gifted them to him.

The very lines that have helped his campaign maintain a consistent if narrow lead were either fluffed or forgotten. Worse still, while he never landed a blow on his opponent, he did little to set out his own vision either. Instead of owning Obamacare, he ceded it to Romney, saying it was a Republican idea that Romney had tried first. Instead of championing the stimulus, he talked about all the things he cut. He never mentioned Bush by name once, even though most people blame him for the crisis.

Romney, on the other hand, made his points forcefully, repeatedly and in an animated fashion. He never mentioned Bush by name either. He plugged away at the charge that four more years of Obama will mean four more years of pain and the accusation that everything that Obama has tried has failed. He painted Obama as a big government liberal seeking to impose regulations on businesses and have experts decide healthcare needs rather than doctors and patients. Whether those accusations were true or not took second place to whether they stuck or not. They did.

Romney needed a game changer: a performance that could shift a race where he has been losing ground and rally a base that has been losing faith. To the extent that every game he has played up until this point he has lost, this was it. Finally his campaign has something to cheer about.

But for all that, it is unlikely, though possible, that it will fundamentally change the dynamics of the race. Some have already cast their votes and most have made up their minds. He is a long way behind almost everywhere he needs to be.

He won himself time and the chance for a hearing. Had he failed it would have been game over. For now he is still in the game.

follow on twitter
RT @resfoundation: Living in lockdown - 16 per cent of families in London live in overcrowded accommodation. That's almost three times as m…
Even before the current economic crisis, 4 in 10 American adults did not have the savings or other resources to cov… https://t.co/hl9vTKKuKW
RT @vialofhope: and i began the wonder...as i sit working from home on the dressing table in the box room of my family's council house expl…
RT @samisam147: Oh. https://t.co/r9FiALeXRW
RT @MikeSegalov: hi @metpoliceuk, walking through finsbury park alone just now, taking exercise, i witnessed a woman being confronted by tw…
RT @kannampilly: There is this phrase in journalism, ‘When a dog bites a man, that isn’t a story; when a man bites a dog, that’s a story’..…
@jnmulholland @malikmeer @ChrisMcGreal https://t.co/bT826jM8AF
RT @rterrasa: Lecturas de cuarentena. Esto de @garyyounge en @librosdelko es muy muy recomendable. De nada. https://t.co/ATq8u5xigl
RT @MsJeanRhys: My God, this is a funny way to live. My God, how did this happen?
RT @asesorpolitico: Austérité, despotisme et corruption ont poussé des millions de citoyens du monde entier à porter leurs revendications d…
© Gary Younge. All Rights reserved, site built with tlc