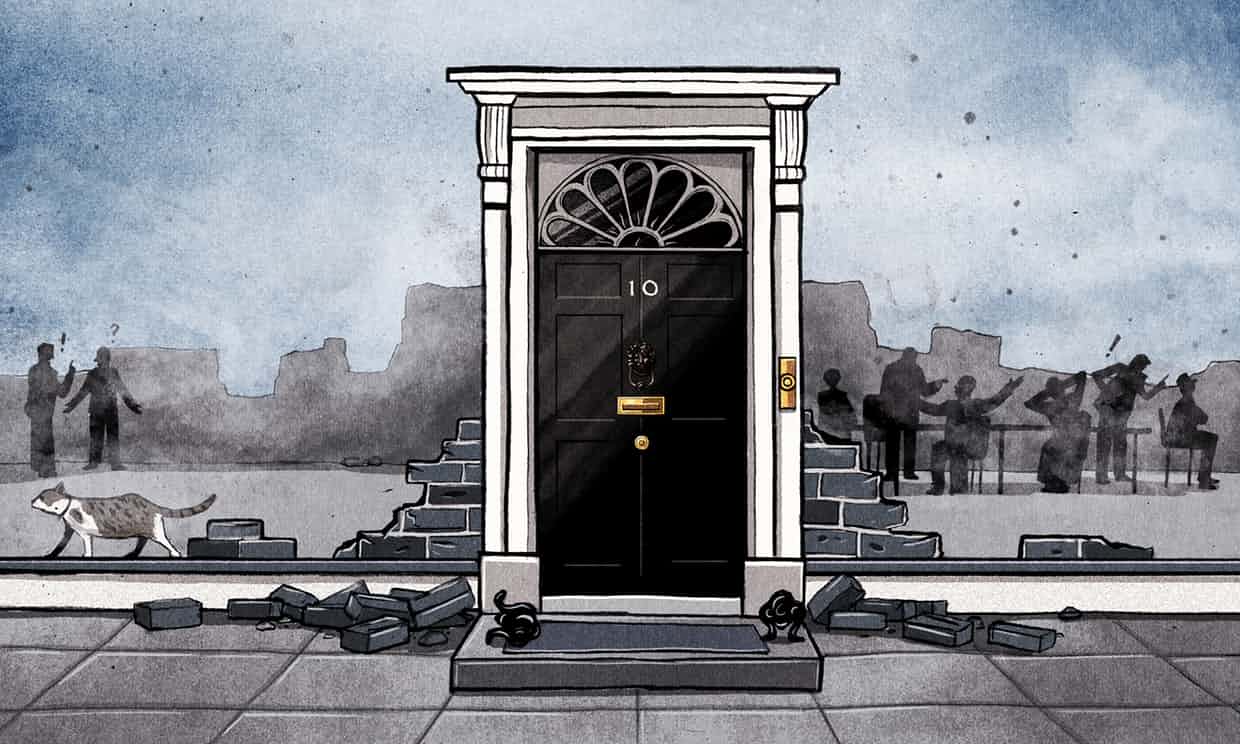 Rudderless and riven by Brexit, the Tories have only one ambition left
The Guardian,
Illustration: Ben Jennings

On the night of the Brexit referendum Michael Gove went to bed, full of red wine and smoked beef, before the results were in. He had campaigned to leave the European Union, but his main concern that night was that remain might win by anything up to 15 points. He slept soundly.

He was woken the next morning as his wife, the journalist Sarah Vine, turned on the television to see the press gathered outside their house. According to Tim Shipman in All Out War, as he came out of the shower Vine greeted him with Michael Caine’s most famous quote from The Italian Job, after one of his fellow villains blasts a van to smithereens: “You were only supposed to blow the bloody doors off.”

The purpose of the Brexit referendum had precious little to do with the EU; it was simply the latest in a litany of efforts to quell the decades-long psychodrama within the Conservative party.

Not only did it achieve the opposite – deepening and exacerbating the rancour within the party – it spread the infection to the country as a whole. For the past two years our government has been paralysed by an internal party feud that has held the nation’s future hostage.

“There are two kinds of European nations,” the Danish finance minister, Kristian Jensen, said last year. “There are small nations and there are countries that have not yet realised they are small nations.” Witnessing that realisation dawn on this government has been painful to watch; anticipating the consequences for generations to come has been excruciating.

So on Friday at Chequers the government will do what it has been doing for the past two years: spend an inordinate amount of time negotiating with itself before producing a “solution” that is unworkable, only to take it to Brussels and discover it is also unacceptable. The problem is not just that they don’t have a rabbit; they don’t even have a hat.

Through a series of self-inflicted wounds the Conservative party has reduced itself to this: hovering between delusional and deranged, bluster and buffoonery. Insisting on concessions that have not been offered; suggesting solutions that have already been rejected; showing up to negotiations with nothing to offer; refusing to concede anything, only then to capitulate to everything.

A party that has won an outright majority once in the last six elections – and held it for all of two years – while averaging 35% of the vote during that time, is pursuing its civil war and we are all collateral damage. If it were a dog you’d put it down; if it were a wedding you’d call it off. Not only for their own sake, but to prevent the harm they might do to others.

For Conservatives this crisis is no longer just about Europe. Brexit has thrown into question their raison d’etre as a party.

It used to be the party of business. But that commitment, it seems, has waned. Earlier this week Britain’s largest car manufacturer, Jaguar Land Rover, became the latest big business to announce it would reassess its UK investment if Britain left the single market. Two weeks earlier Airbus confirmed it had started to “press the button” because of Brexit concerns. A Deloitte survey earlier this week revealed that 75% of major British companies were now pessimistic about Brexit. 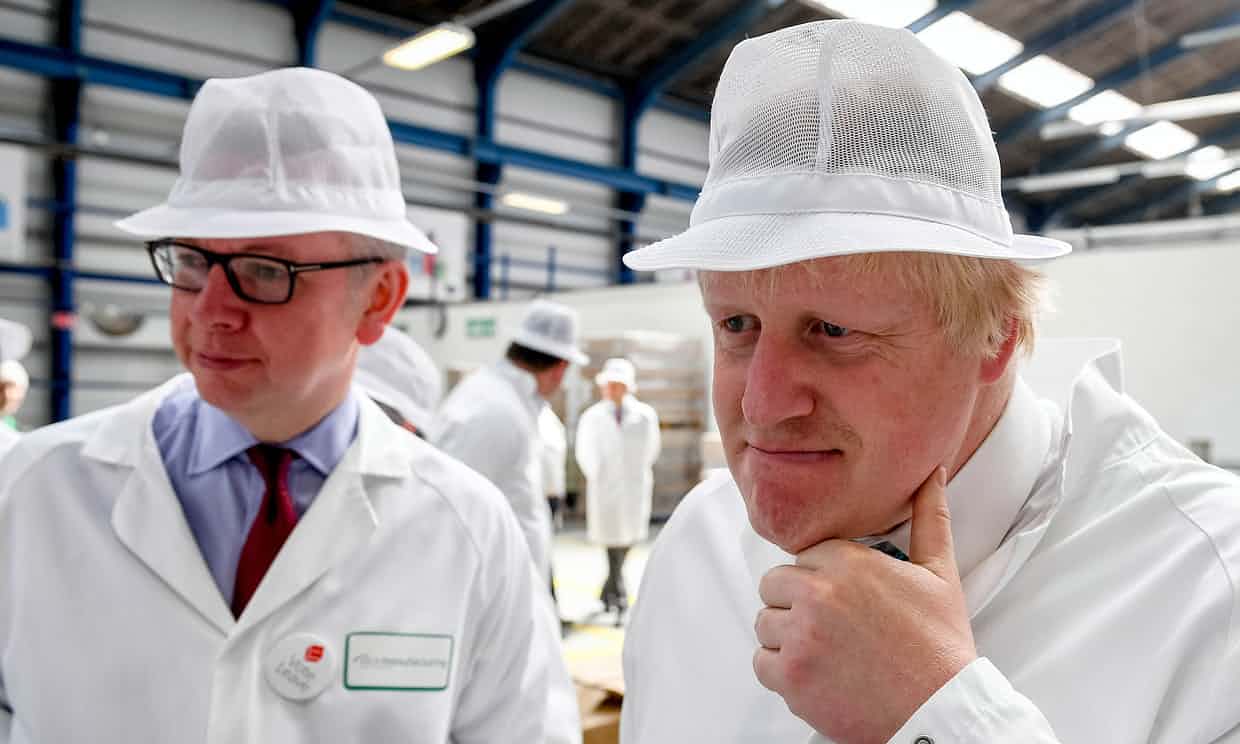 It’s not difficult to see why. After the British chief executive of the German-owned Siemens, Jürgen Maier, asked for clarity on the deal Britain was looking for – citing Airbus and other companies’ concerns – the nation’s chief diplomat, foreign secretary Boris Johnson, responded, “Fuck business”.

“There are more anti-business Conservatives in the party than at any time in recent history,” the president of the Confederation of British Industry told the Financial Times recently.

It used to be the party of the union. But even as its minority government clings to power, thanks to the hardline Democratic Unionist party, Brexit presents perhaps the greatest challenge to the integrity of the United Kingdom for some time. In Scotland the brief surge for independence following the Brexit referendum has waned for now. But for a range of reasons Ireland is different.

Johnson finds the apparently irreconcilable concerns in Ireland – about the possibility of a reintroduction of a hard border between north and south, and Unionist worries about retaining the same status as the rest of Britain – “millennium bug stuff”.

During a closed-door speech to members of Conservative Way Forward at the Institute of Directors in London last month, he said: “It’s so small and there are so few firms that actually use that border regularly, it’s just beyond belief that we’re allowing the tail to wag the dog in this way … We’re allowing the whole of our agenda to be dictated by this folly.”

Hardly surprising that, with this kind of sensitivity from Westminster, more than a quarter of people in the north of Ireland have changed their mind since the Brexit referendum and would support a united Ireland if there were a vote. According to a poll in June, if there were a referendum in the north 45% would opt to stay in the UK and 42% would now favour joining the rest of Ireland. There is no prospect of such a referendum at present. But if that trend continues and a hard border is installed it’s not difficult to see momentum growing for one.

The issue is not that the Conservatives no longer believe in these things; it is that they no longer seem to believe in anything apart from their capacity to remain in power. This alone would not be such a heinous goal if it were accompanied by any real ambition about what to do with the power they have. But they have none. Their domestic agenda is dwarfed by Brexit and they do not have a Brexit agenda they can agree on.

So the government limps from crisis to crisis, summit to summit, dragging the country towards a clifftop of unknown altitude, without plan or purpose. Its cabinet is not a balance of talents and expertise but of leave and remain – the sole prism through which all disagreements are viewed. Riven at the highest levels, rudderless at every turn, leaderless in all but name, at the mercy of small numbers, they keep going.

The only thing keeping the whole enterprise together at this point is the likelihood that a coup would prompt an election that could make Jeremy Corbyn the prime minister. They fear he will wreck the country – and refuse to give him the pleasure when they are doing such a good job on that front themselves.