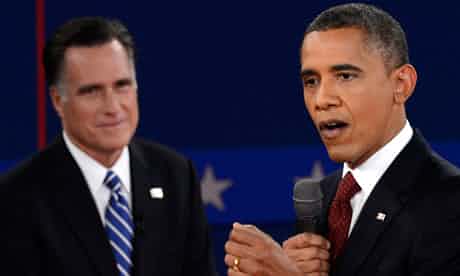 Barack Obama had one thing going for him coming into this debate: he couldn't be any worse than the last time. Mitt Romney had one drawback: he apparently couldn't be any better.

As it turned out Obama was much better. Clearer, sharper, more decisive and passionate, he challenged Mitt Romney on the facts and rhetorically he overwhelmed him. It was a rout every bit as conclusive as the first debate. Only this time the victor was Obama. Last time he barely showed up; tonight he showed Romney up.

To him were gifted the best lines of the night. When taking on his Republican challenger over his shift from supporting a ban on assault weapons as governor of Massachusetts to opposing them as a presidential candidate, he said: "He was for an assault weapons ban before he was against it."

When Romney pushed him on investments in his pension funds, asking if he'd seen his pension recently, Obama responded: "I don't look at my pension. It's not as big as yours so it doesn't take as long."

When Romney was corrected by the moderator, Candy Crowley, after suggesting that Obama did not call the attack on the US embassy in Benghazi a "terrorist attack" Obama shouted with a smile: "Say it louder, Candy."

Romney did put up a fight. Approaching the debate with the same style as he did in Denver he brought his best self. Probably his best line came in an answer about why, given the hard times of Obama's first term, he should be trusted with a second. "We just can't afford another four years like the last four years," said Romney.

It is difficult to equate the stiff and impersonal figure of the conventions with the man who showed up tonight. But it simply wasn't enough. Indeed, if anything it was too much. For in his effort to reassert the control he enjoyed during the first debate he overreached.

Where he once appeared animated he now came off as aggressive. His interruptions looked desperate and his interjections were shrill. In the two weeks since his triumph in Denver he went from persuasive to petulant.

The other loser tonight was US politics. Two men circling, talking over each other, drawing on different facts and calling each other liars looked like a metaphor for much that has gone wrong in American political culture over the last generation. Town hall meetings are supposed to be less confrontational. But more caustic than consensual, this was a bad-tempered affair.

Obama's performance will energise his base and shore up the doubts of those shaken by his earlier drubbing. It will staunch the bleeding of support towards Romney but it is unlikely to reverse the flow.

They called it a town-hall meeting. But in truth there are very few towns like it. It was a room full of undecided voters: the nation is not.

follow on twitter
RT @BernardineEvari: Please follow the groundbreaking online #MuseumofColour UK, founded by the unstoppable Samenua Sesher. The 1st gallery…
RT @EthnicityUK: Gary Younge is interviewed by @sonikkalogan about his work on racism and gun violence in @the_hindu #DataPoint podcast. h…
RT @thefreedomi: 🚨 NEW: Saudi women’s rights activist & academic Salma al-Shehab was sentenced to 34 years in prison + 34 year travel ban f…
RT @LRB: #DawnFosterForever! On Thursday 15 September at the @LRBbookshop, @BizK1, @piercepenniless, Lynsey Hanley and @garyyounge will d…
RT @ShowunmiV: This is how we support Black women and girls https://t.co/8YmgV21zHo
RT @sonikkalogan: It's #DataPoint Pod Thursday! In this week's episode, I talk to @noraneus, @garyyounge and @Casey_J_Wooten about the U.S.…
RT @bgnoiseuk: Next month, @LRBbookshop will host an event to celebrate the life and work of Dawn Foster with @BizK1, @piercepenniless, Lyn…
Help me Twitter. The quote: ""You can cut all the flowers but you cannot keep Spring from coming." is most commonly… https://t.co/Xs7JkiOEd5
RT @the_hindu: #DataPoint | This Thursday, @sonikkalogan takes a look at the #US gun violence epidemic, as mass shootings continue to grow…
City workers get double-digit wage rises while lowest-paid see 1% increase - “Them’s the breaks” https://t.co/XeVyG72iA5
© Gary Younge. All Rights reserved, site built with tlc
Best place to buy stendra online How to get lioresal without prescription How much does aldactone cost Mobic 15 mg price Where can i buy lamisil over the counter Buy generic onglyza Buy xenical amazon How much does generic lipitor cost Buy generic combivir online How to get norvasc without a doctor