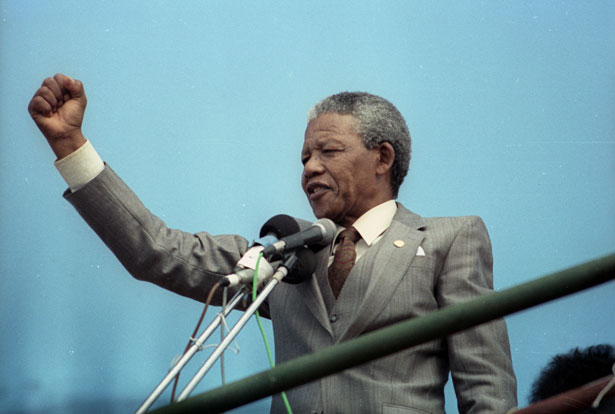 For a nation in mourning, South Africa was in festive spirits in the week following Nelson Mandela’s death. From the moment that first train left at 5

for the official memorial service, which was addressed by Barack Obama among others, until the first speech, the chanting never stopped. Thousands sang as one in praise of the African National Congress’s military wing, Umkhonto we Sizwe, and Mandela, who founded it, as well as other staples from the liberation struggle. Pretty much everybody had something—a hat, coat, umbrella, shawl or flag—that bore the colors of the ANC or the likeness of Nelson Mandela, or both. So as they danced, shuffled and swayed to the sound of their own voices, the stadium was carried away on waves of black, green and yellow. At times the crowd stomped so hard you could feel the stadium shake.

“Of course we are sad,” said George Tsholo in Soweto on the national day of prayer. “But he was an old man, and we had come to expect his passing and prepare for it. It wasn’t like Lady Di, where one day she was there and the next she wasn’t. We knew this day was coming.”

But the mood seemed to go beyond the man to a wistful embrace of the moral certainty and sense of resistance that he had come to personify. As such, it was less a commemoration than a revival: a resurrection of the spirit of the nation’s first democratic elections almost twenty years ago.

South Africans celebrated their history for the same reason that American progressives hark back to the civil rights era or British and French patriots reminisce about the war. Even if those were tough times, there was a moral clarity to the period that gave promise and brought unity. Casting a vote for Mandela in that era was more than just a tick in the box—it was about making your mark for liberation.

Back then, politics meant liberation. It may seem counterintuitive, but Mandela’s death revived that sense of hope and optimism in many by reminding them of the longer journey on which the country has embarked and how far they have come. So for ten long days they partied like it was 1994.

But this nostalgia was underpinned by a deep sense of melancholy about what has—and hasn’t—happened since those first elections. Some of this is inevitable; there’s a reason why there are plenty of chants about resisting and precious few about governing. Governing involves compromise in all circumstances. What’s more, the consequences of a couple of centuries of entrenched racial bigotry are not erased in a couple of decades. It is easy to forget the parlous and perilous state South Africa was in when Mandela took over: political violence was common, and the transition was threatened by Zulu separatists and white supremacists.

Nonetheless, there is a growing sense of frustration among black South Africans that the ANC has failed to deliver sufficiently when it comes to confronting poverty—black unemployment is at 30 percent—and racial inequality. “There is some social mobility,” explains Ebrahim Fakir of the Electoral Institute for the Sustainability of Democracy in Africa. “But a large number of black kids live almost exactly the same lives as their parents did.”

And there is growing disgust at the high levels of corruption within the party and the government. One day before Mandela’s death, a report was leaked alleging that South Africa’s president, Jacob Zuma, spent 200 million rand ($19.6 million) of taxpayer money on improvements to his house in Nkandla and then lied to cover it up. A recent poll showed 40 percent of South Africans think members of Parliament and local councilors are corrupt—up from 25 percent four years ago.

Andile Mngxitama, a senior figure in a new party called the Economic Freedom Fighters, thinks Mandela’s death has exposed a longstanding fault line between the ANC and its base. “There is a disconnect, particularly among the young, between remembering Mandela and remembering the ANC. The ANC has the weight of its history pulling people towards it, and the weight of its record in government pulling it down.” The tension between the party and its base was laid bare during the memorial service when the crowd booed every time Zuma’s face was shown on the Jumbotron, while others made a hand gesture used in soccer meaning “time for a substitution.”

In this, the crowd seemed to surprise itself. This was primarily an ANC crowd frustrated at its limited options for challenging the party’s leadership. The booing started off tentatively and died out. But others became emboldened until, by the third time Zuma appeared, the booing was reflexive and widespread.

The Economic Freedom Fighters was set up by Julius Malema, the former ANC Youth League leader who was expelled from the party last year for making racially inflammatory remarks. The EFF hopes to capitalize on this moment ahead of the next election by appealing to the ANC’s left with a blend of Leninism and black consciousness while wearing red berets. So far, it has enjoyed limited success.

For the most part, when it comes to politics, the general mood is more despondent than defiant. Blacks are far more likely than whites to say they would rather not vote than switch parties. The long-anticipated passing of Mandela has offered a prism through which to appreciate the democracy that has been won and to reflect on its limitations when it comes to delivering on its promises of justice and equality.

follow on twitter
RT @MCRSociology: Gary Younge discusses identity politics and America with Will Hutton in this episode of @thewesocietypod https://t.co/72…
RT @mart_welton: Congratulations to all those getting their A-level results today. If you have BBB at A-level or above you can still apply…
RT @BernardineEvari: Please follow the groundbreaking online #MuseumofColour UK, founded by the unstoppable Samenua Sesher. The 1st gallery…
RT @EthnicityUK: Gary Younge is interviewed by @sonikkalogan about his work on racism and gun violence in @the_hindu #DataPoint podcast. h…
RT @thefreedomi: 🚨 NEW: Saudi women’s rights activist & academic Salma al-Shehab was sentenced to 34 years in prison + 34 year travel ban f…
RT @LRB: #DawnFosterForever! On Thursday 15 September at the @LRBbookshop, @BizK1, @piercepenniless, Lynsey Hanley and @garyyounge will d…
RT @ShowunmiV: This is how we support Black women and girls https://t.co/8YmgV21zHo
RT @sonikkalogan: It's #DataPoint Pod Thursday! In this week's episode, I talk to @noraneus, @garyyounge and @Casey_J_Wooten about the U.S.…
RT @bgnoiseuk: Next month, @LRBbookshop will host an event to celebrate the life and work of Dawn Foster with @BizK1, @piercepenniless, Lyn…
Help me Twitter. The quote: ""You can cut all the flowers but you cannot keep Spring from coming." is most commonly… https://t.co/Xs7JkiOEd5
© Gary Younge. All Rights reserved, site built with tlc
Tadalafil online us Order lamisil Best online seroquel How to buy furosemide in usa Generic avapro cost Can i take synthroid and doxycycline together Lipitor sales 2020 Buy generic azulfidine Low price glucotrol Actos best buy