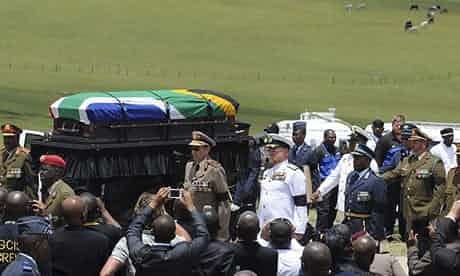 Nelson Mandela funeral: a gun salute, then still, silent calm, and it was over
The Guardian,
Photograph: Foto24/Getty Images

To the pounding of a 21-gun salute from a graveside nestling in the lush valley below, Nokulzola Thetlani began her eulogy. Behind her, in the Nelson Mandela museum, hung a photograph of the late South African leader as a young man in ceremonial Tembu clothing accompanied by his quote: "It always seems impossible until it is done." In front flickered a small flame atop a replica of a conch shell. To her left stood Lieutenant Colonel Piet Paxton, who joined the South African army at the height of apartheid in 1978, in full camouflage gear.

And then, with the shooting over and gunsmoke lingering in the air, Thetlani nodded to Paxton, who extinguished the flame and saluted her to the roar of helicopters and fighter jets overhead.

The undulating rural landscape where Mandela had herded goats as a boy was momentarily overwhelmed by the roar of state ceremony before returning to a still, silent calm. It was over.

A week of public mourning had begun with spontaneous gatherings outside Mandela's Johannesburg and Soweto homes as soon as the news of his death was announced by the South African president, Jacob Zuma, on 5 December. The culmination of the week, which included a somewhat shambolic memorial ceremony at the FNB stadium on Tuesday, brought the sort of never-ending queues not seen since the country's first democratic election in 1994 as South Africans waited to pay their last respects while his body lay in state in Pretoria for three days. On Sunday, the nation delivered Madiba, as he is affectionately known, back to his family.

The tightly controlled, three-hour private funeral was dominated by the Mandela clan and those who knew him best, alongside African leaders and dignatories including Oprah Winfrey, Prince Charles, Bono, Gerry Adams, Richard Branson and the actor Idris Elba.

When his body was finally lowered into the ground, an incredible life and a week of mourning had ended. A black man who had taken up arms against a racist regime, led a movement that had defeated it, led the negotiations to his own release and the nation's transition, and then presided over the first democratically elected government, died in his bed aged 95 revered the world over. Many things about his life story seemed impossible. And yet, true to his word, he had done it.

There remained, to the very last, a festive air to the commemorations in a week that saw more toyi-toying than tears. On the road overlooking the Mandela farm, the Madiba Beat Crew were entertaining onlookers with a song and dance. Dressed in traditional Xhosa robes they had spent the past week selling caps and busking outside Mandela's house in the plush Johannesburg suburb of Houghton. They had pooled the money they made and spent it to get to Qunu. Thandi Bushula, wearing a fiery red hat and doing a shuffle dance, said: "In my culture in order to honour someone properly you cannot watch on television, you have to go to the final resting place.

"We sold everything to get here," she said with a huge smile. "Now we have no money for fuel to go back."

But this day felt more sombre than previous ones. This was the day the light went out. Its finality lent it a seriousness that left even Paxton, a sturdy, silver-haired man in camouflage gear, a little choked. "There's no way to describe it or to imagine it happening again," he said. "Not on this scale. It was a privilege and an honour to be part of it."

With roads blocked for miles around, this was also a more exclusive event than those that came before. That did not bother Dickson Gangatele, who lives a short stroll down the hill in Qunu from the Mandela mansion. Gangatele had pulled his armchair right next to the television as his eyesight has started to fail him at 73. "It's the only way I can see everything. I want to hear what they have to say about him."

The retired corn miller had three of his six children and four grandchildren piled up on the sofa and interrupted their viewing with tales of the young Nelson Mandela from the years before his imprisonment. "I knew this man was going places but I never thought he would do so many things," he said.

"My father was older than this Nelson but he was impressed. When they fought with sticks he was really strong."

After his release from prison, Mandela came to the Gangatele's house to ask after Papu Gangatele, who had died the year before. "I told him that I had thought he was wasting his time and that the white people would never go. I thought he would give up on Robben Island. Then I told him I was wrong. He didn't, he was a strong man."

Some 20 miles away in Ngangelizwe township, just outside the nearest town, Mthatha, Lucy Stemele, 63, was sitting in a tent with about 100 others watching the funeral on a huge screen in the gardens of the local Rotary Club. With her head wrapped against the morning sun and her face lined by worry and worn by weather, Stemele described her affection for Mandela in stark terms, adding: "The whites used to beat us and call us kaffirs," she said. "They made us carry pass books so we had to ask their permission before we could go anywhere. Mandela freed us. We were in bondage."

Almost 20 years after the first elections Stemele, a widow whose son was trampled to death as local youths tried to escape an apartheid raid, still lives in a shack – although she says a house is now being built for her. For this, the promise of a house, she thanks Madiba.

Perhaps because the Eastern Cape is so much poorer than the Johannesburg area, people here were more likely to express their admiration for Mandela in practical ways. Zandile, 30, mentioned the new hospital and school where she is a teacher. Nwabisa, 27, talked of her four-year course to become a nurse. "I didn't have to pay and they gave me a stipend. That is because of Madiba. So we have come to say goodbye. He was a good man. A great man. But he was an old man and how he has gone and it is up to us to continue the struggle for our children. It's in our hands now."

follow on twitter
RT @MCRSociology: Gary Younge discusses identity politics and America with Will Hutton in this episode of @thewesocietypod https://t.co/72…
RT @mart_welton: Congratulations to all those getting their A-level results today. If you have BBB at A-level or above you can still apply…
RT @BernardineEvari: Please follow the groundbreaking online #MuseumofColour UK, founded by the unstoppable Samenua Sesher. The 1st gallery…
RT @EthnicityUK: Gary Younge is interviewed by @sonikkalogan about his work on racism and gun violence in @the_hindu #DataPoint podcast. h…
RT @thefreedomi: 🚨 NEW: Saudi women’s rights activist & academic Salma al-Shehab was sentenced to 34 years in prison + 34 year travel ban f…
RT @LRB: #DawnFosterForever! On Thursday 15 September at the @LRBbookshop, @BizK1, @piercepenniless, Lynsey Hanley and @garyyounge will d…
RT @ShowunmiV: This is how we support Black women and girls https://t.co/8YmgV21zHo
RT @sonikkalogan: It's #DataPoint Pod Thursday! In this week's episode, I talk to @noraneus, @garyyounge and @Casey_J_Wooten about the U.S.…
RT @bgnoiseuk: Next month, @LRBbookshop will host an event to celebrate the life and work of Dawn Foster with @BizK1, @piercepenniless, Lyn…
Help me Twitter. The quote: ""You can cut all the flowers but you cannot keep Spring from coming." is most commonly… https://t.co/Xs7JkiOEd5
© Gary Younge. All Rights reserved, site built with tlc
Can i get cleocin over the counter Where can i buy mobic Generic lipitor cost Buy real prandin online Cost of stendra at walmart Buy astelin online no prescription Norvir price Order lamisil Pravachol street price How to order cefzil online