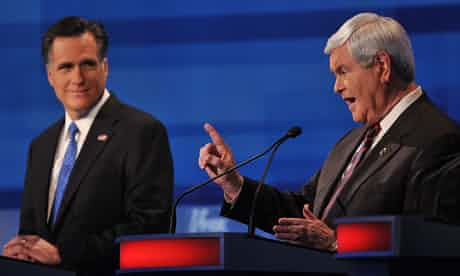 On the one hand, there is the battle to unseat Mitt Romney from his apparently unassailable frontrunner position; on the other, there is the battle to be the person who can claim the much coveted conservative mantle to unseat Romney. The trouble is that by the time they have worked out the latter, the opportunity to execute the former may have passed.

And so it is that the South Carolina debate Thursday night wavered between Rick Santorum and Newt Gingrich alternately rounding on Mitt Romney and on each other, effectively leaving everybody bloodied and little changed, while Ron Paul did his own thing.

Santorum was the most focussed, swinging for the bleachers with his attacks on Romney's healthcare plan and abortion record in Massachusetts – "what we're talking about here is someone who's not going to check the boxes" – and effectively painting Gingrich as pompous and unstable. "I don't want a nominee that I have to worry about what he's going to say next, and that's what I think we're seeing here," he said.

To Gingrich's suggestion that Santorum should drop out of the race and endorse him, the former senator pointed out that he won Iowa and beat Gingrich in New Hampshire: "These are not cogent thoughts, let's just be honest."

Santorum had little choice. The effect of his annointment by evangelical leaders over the weekend was effectively erased by Gingrich's impressive debate performance on Monday, prompting what looks like a late swing in the state. Rick Perry left the race earlier in the day and endorsed Gingrich; Sarah Palin had given Gingrich the nod the day before. This debate was Santorum's last chance to mix it up with a late surge as he did in Iowa (where it has transpired, he – not Romney – actually won). He did well in this debate, but not nearly well enough.

Gingrich was probably the least focussed; confusing intellect with arrogance, he didn't look like he was running for president so much as strutting for it. He started strongly, attacking the moderator (his standard play) for asking the obvious question about his second wife's accusations that he had asked her for an open marriage:

"I think the destructive, vicious negative nature of much of the news media makes it harder to govern this country, harder to attract decent people to run for public office, and I am appalled that you would begin a presidential debate on a topic like that."

A moral compass that says the state should have the right to tell people who they can sleep with, and tell women, in particular, what they can do with their bodies is fine, but that a journalist asking a social conservative whether he offered his wife to enter a polygamous relationship is off-limits is curious to me. Nonetheless, by attacking the media, Gingrich effectively transformed himself from a philanderer to a martyr.

So, let it be recorded on this day that a Republican candidate for the presidency got a standing ovation in one of the most conservative states in the country, when he refused to answer a question about cheating on his wife. The fact that it was probably the most memorable exchange of the evening probably works two ways. It shows him as a bruiser, but it also keeps the accusation front and center. Gingrich did fine, and that may be enough.

And then, there was Romney, playing rope-a-dope. Just trying to avoid a lethal punch, a fatal slip-up, a major gaffe, knowing that if the bell rings on Saturday and he is still the winner then the game is up. This he managed relatively well. Heckled for his refusal to release years of tax returns, he gave the kind of steady, dispassionate performance that has kept him in the game and made him both unlovable and unbeatable.

Ron Paul, who is standing to win an argument rather than a nomination, did what he does best: reduce everything to the reduction of government – as though that in itself equates to the expansion of liberty.

Nobody shot themselves in the foot or more than grazed anyone else. All were bloodied, but none fell. It is now left to Saturday's voters to winnow the field and expel the chaff.