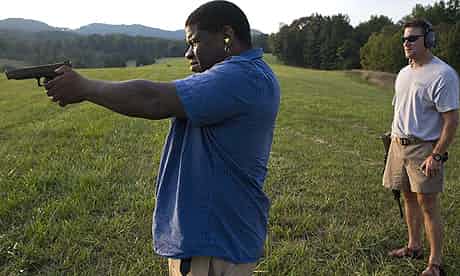 I'm not very good with guns. A 9mm Glock sits heavy in my hand and on my conscience. I'm just a short drive away from Virginia Tech where Seung-Hui Cho killed 32 people and wounded many others in 2007. With each shot the gunfire echoes all around Cahas mountain and squawking birds pepper the clear blue sky. So when I pull the trigger, I flinch. That, says Carey Garst, my host, is why I keep missing the target.

Carey, who has been shooting since he was a teenager, is patient. "You've got nothing to be scared of," he assures me. "You're on the right side of the gun." And then he loads me up with more bullets while I try to forget the lethal force in my hands and put a hole in a paper plate. Later he takes out the AR-15 rifle and I feel as though I am auditioning for yet another sequel to the Matrix.

Carey enjoys guns for sport. Not long ago he took a course at the private security firm Blackwater to gain more expertise. He has an entire arsenal in a huge safe in the shed at the back of his house stacked up in front of a picture of Jimi Hendrix. There are pistols, small calibre rifle, rifle and shotgun combinations, something that's good for killing varmints and a fully automatic Uzi that he got a good deal on. He acquires guns like I acquire books. Not to use them but just to have them. He's actually trying to get rid of some because he barely uses them.

But he also thinks they are vital for self-defence. "If your 80-year-old grandmother is living alone and somebody breaks in, how's she going to protect herself?" he asks. "She can't fight him off hand to hand." When he describes the attributes of different weapons and shooting styles, he does so in terms of his ability to fire at persons unknown in situations indefinite. At times you wonder whom he seeks to defend himself against. Up here in the hills of Franklin County, 20 miles south of Roanoke, crime is not much of a problem and Carey does not seem like the kind of man who goes looking for trouble.

Obama, Carey insists, wants to take his guns. Obama has insisted he doesn't. Carey doesn't believe him. Obama has voted to ban semi-automatics and for stiffer licensing laws in the past. And while Carey doesn't think he'll be able to take his guns, the fact that he may want to is reason enough to oppose him. In a state like Virginia, even that perception could hurt Obama badly, which is why the National Rifle Association has been running ads against him recently.

That's not the main reason why Carey doesn't like Obama. There are many, foremost among them his redistributive tax policy. But his issues with the Democratic nominee go beyond the political to the philosophical. Carey, who has a well-paid job for a lumber firm in Rocky Mount, believes that government intrudes in the natural order of things. People should protect themselves, support themselves and take care of themselves. 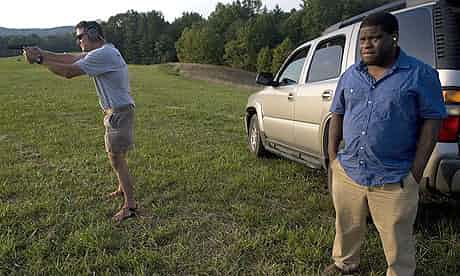 Carey Garst fires off a round while Gary Younge looks on. Photograph: Sean Smith

Well-read and well-travelled Carey doesn't suit the liberal stereotype of a gun nut, let alone a redneck. His adherence to rugged individualism suits him quite well because he is quite a rugged individual. He built his own barn, clears his own land (he owns a few acres) and is in the process of making a lake. He works hard and seems proud of the fact that he only takes one week vacation a year.

He describes himself as conservative, not Republican. He is deeply disappointed in George Bush's last term, citing his failure to secure the border from illegal immigrants and his failed nomination of Harriet Miers as two particular low points. He's backing McCain as the lesser of two evils but Democrat, Mark Warner, for Senate because he did such a good job as governor.

As the sun went down, we took a short tour of his land and then headed home for dinner with his wife, who is also named Carey, and is deeply religious and more conservative than he is, according to her husband. Mrs Garst listens to the public radio station NPR on her way to work in the morning and conservative talk radio on her way back. She likes Rush Limbaugh and Sean Hannity. But neither of them spend much time on the internet scooping up rumours only to regurgitate them as fact.

Over wine, we talked health care and taxes and they both despaired at the prospect of an Obama administration. Given that he's such a disaster, I asked why they thought he was doing so well in Virginia. After a moment of reflection Mrs Garst said she had no idea.

"Why do they support him?" she asked. "What do they say?" I mentioned economy, Iraq and health care as the main three things that keep coming up. She had informed responses as to why Obama would be bad on all of them. But her question itself was telling.

An evening with the Garsts lays bare the depths of America's political polarisation. A night out with many liberals could well produce the same confusion about what motivates the other side. The problem is not just that people do not agree with each other. It is that at times they don't even seem to know each other politically beyond caricature. A sizeable section of both the Democratic and Republican base believes that the only reason the other exists is because they are either deluded, bigoted, misinformed, misanthropic, greedy, gullible or godless. Both believe that their information pool is contaminated - one by the liberal media, the other by the mainstream corporate media. The issue is not that there's no middle ground, it's that there's little in the way of common ground.

follow on twitter
RT @BernardineEvari: Please follow the groundbreaking online #MuseumofColour UK, founded by the unstoppable Samenua Sesher. The 1st gallery…
RT @EthnicityUK: Gary Younge is interviewed by @sonikkalogan about his work on racism and gun violence in @the_hindu #DataPoint podcast. h…
RT @thefreedomi: 🚨 NEW: Saudi women’s rights activist & academic Salma al-Shehab was sentenced to 34 years in prison + 34 year travel ban f…
RT @LRB: #DawnFosterForever! On Thursday 15 September at the @LRBbookshop, @BizK1, @piercepenniless, Lynsey Hanley and @garyyounge will d…
RT @ShowunmiV: This is how we support Black women and girls https://t.co/8YmgV21zHo
RT @sonikkalogan: It's #DataPoint Pod Thursday! In this week's episode, I talk to @noraneus, @garyyounge and @Casey_J_Wooten about the U.S.…
RT @bgnoiseuk: Next month, @LRBbookshop will host an event to celebrate the life and work of Dawn Foster with @BizK1, @piercepenniless, Lyn…
Help me Twitter. The quote: ""You can cut all the flowers but you cannot keep Spring from coming." is most commonly… https://t.co/Xs7JkiOEd5
RT @the_hindu: #DataPoint | This Thursday, @sonikkalogan takes a look at the #US gun violence epidemic, as mass shootings continue to grow…
City workers get double-digit wage rises while lowest-paid see 1% increase - “Them’s the breaks” https://t.co/XeVyG72iA5
© Gary Younge. All Rights reserved, site built with tlc
How to get renagel online How to get namenda without prescription Where can you get spiriva Get xenical prescription online Where is better to buy floxin What do i need to buy cellcept Where can you get vfend Where can i get lamisil cream Where to buy generic adcirca Where to get aldara creamaldara for sale