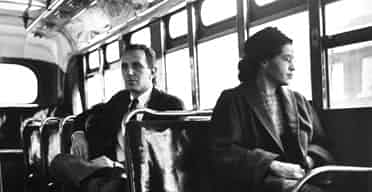 Taking a stand by sitting down
The Guardian,
Photograph: Bett

Two gave up their places so a white man could sit down.

"If you don't stand up, I'm going to have to call the police and have you arrested," said Mr Blake.

And so with a passive aggressive act of political rebellion against the racism of the deep south, Ms Parks, who died yesterday aged 92, took her stand by keeping her seat.

In so doing the 42-year-old seamstress gave voice to a spirit of resistance in a place and at a time when the world preferred black women to remain silent. Her throat was so dry after her arrest that she longed for a drink of water. It would remain parched for some time because the water fountain at the city jail was for whites only.

Her arrest sparked a chain reaction that started the bus boycott that launched the civil rights movement that transformed the racial segregation of America's southern states from a local idiosyncrasy to an international scandal. It was her individual courage that triggered the collective display of defiance that turned a previously unknown 26-year-old preacher, Martin Luther King, into a household name. But the days of Mr Blake's mindset and the laws that enforced it were numbered.

At a time when apartheid was the international rule - enforced by all colonial powers including the British - rather than the exception, her challenge was to the established order of the global south as well as the deep south. Within the next 10 years 20 African countries would gain independence from white minority rule.

It was 1955 in the cradle of the Confederacy. Just the year before the supreme court had outlawed segregation and a 14-year-old boy, Emmett Till, had been murdered for saying "Bye Baby" or wolf whistling to a white woman in a grocery store in rural Mississippi. Ms Parks said she was thinking of him when she decided she would not be moved. From the position where she was ushered off the bus on Dexter Avenue she could see the point where Jefferson Davis had stamped his foot and declared an independent Confederacy to defend slavery less than a century before, and where the former governor George Wallace would promise "segregation now, segregation tomorrow, segregation for ever" less than 10 years later.

Yesterday the plaudits rolled in from across the political divide and around the world. "Rosa Parks was a woman of great courage, grace and dignity," the former president Bill Clinton said, echoing many. "Her refusal to be treated as a second-class citizen on a Montgomery bus in 1955 struck a blow to racial segregation ... She was an inspiration to me and to all who work for the day when we will be one America."

As an icon Ms Parks entered not just history but mythology, constantly misportrayed as an accidental heroine - the weary lady with tired feet whom history chose to embody the zeitgeist.

The truth was that she was a lifelong anti-racism activist and feminist who had often been expelled from the local buses for refusing to comply, including once by the same Mr Blake some 12 years previously. Others had been arrested but local leaders decided she made the best test case and she was happy to oblige.

"To call Rosa Parks a poor, tired seamstress and not talk about her role as a community leader and civil rights activist as well, is to turn an organised struggle for freedom into a personal act of frustration," writes Herbert Kohl in his book She Would Not Be Moved.

But if her experience in the south revealed much about the spirit of the civil rights era, her life in the northern city of Detroit says at least as much about the plight of African-Americans as they continue to fight for economic rights. For even as she met national leaders in her last decade, to be awarded the presidential medal of freedom and congressional gold medal for her stance in the past, she struggled to make ends meet in the present.

Until last December, when Ms Parks' landlord stopped charging her, she had to rely on a local church to help her pay her rent. She had won the right to ride on the bus; those who came after her are still struggling to pay for the ticket.