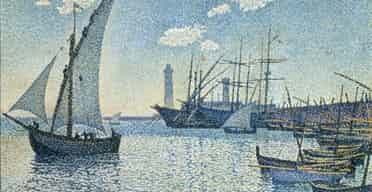 US museums to sell off art treasures
The Guardian,
Photograph: Christie's

America's art museums are poised to put up for auction huge amounts of artwork by some of the world's most revered painters next week, prompting accusations from critics that they are neglecting their role as cultural custodians in search of short-term financial gains.

Paintings by Picasso, Chagall and Modigliani will be sold by a variety of prestigious institutions, including New York's Metropolitan Museum of Art, the Museum of Modern Art (Moma), the Art Institute of Chicago and the Los Angeles County Museum of Art. Museum directors say they are selling works that have been gathering dust for years in order to replenish their stocks.

"It's only healthy," John Elderfield, the chief curator of painting and sculpture at Moma, told the New York Times. Moma hopes to sell 13 works, including works by Picasso, Henry Moore, and Théo van Rysselberghe's picture of a French Mediterranean harbour, at Christie's next month.

"When the collection was initially developed, Conger Goodyear, the museum's first president, said it would have the same permanence as a river - we know what direction it is going in, but it has to be fluid. That's how we operate. "The van Rysselberghe is very good," he said, by way of example. "But that early part of our collection we don't wish to develop."

With 43 works up for sale at Sotheby's the Los Angeles County Museum of Art is selling more than most and hopes to earn between $10m (£5.6m) and $15m. "We've taken a pretty aggressive look at the collection, something we don't do that often," said Nancy Thomas, the museum's deputy director. "It's more about the collection and the opportunity to improve it than it is about the market."

Modigliani's portrait of Spanish landscape painter Manuel Humbert is among the most valuable and, says the museum's chief curator of modern art, Stephanie Barron, the most difficult to part with. The fact that the museum has two other Modigliani portraits, she says, softened the blow. "It seemed like a luxury to have all three," she told the New York Times.

But other curators believe the move is being driven by money-minded trustees with insufficient sensitivity to the durability of artistic tastes in the long term.

"History will make a fool of these museums," said Robert Rosenblum, an art historian and a curator at the Solomon R Guggenheim Museum. "It always happens. Often the things that are sold are based on inherited prejudices that will be overturned in the future."

The latest move comes on the back of a huge dispute over New York Public Library's decision to sell Asher B Durand's Kindred Spirits to a Wal-Mart heiress last May. Ms Durand's painting, a classic of the Hudson River school, is believed to have fetched around $35m. The library faced stern criticism for selling the piece but argued that it had to in order to bolster its flagging endowment.

follow on twitter
RT @BernardineEvari: Please follow the groundbreaking online #MuseumofColour UK, founded by the unstoppable Samenua Sesher. The 1st gallery…
RT @EthnicityUK: Gary Younge is interviewed by @sonikkalogan about his work on racism and gun violence in @the_hindu #DataPoint podcast. h…
RT @thefreedomi: 🚨 NEW: Saudi women’s rights activist & academic Salma al-Shehab was sentenced to 34 years in prison + 34 year travel ban f…
RT @LRB: #DawnFosterForever! On Thursday 15 September at the @LRBbookshop, @BizK1, @piercepenniless, Lynsey Hanley and @garyyounge will d…
RT @ShowunmiV: This is how we support Black women and girls https://t.co/8YmgV21zHo
RT @sonikkalogan: It's #DataPoint Pod Thursday! In this week's episode, I talk to @noraneus, @garyyounge and @Casey_J_Wooten about the U.S.…
RT @bgnoiseuk: Next month, @LRBbookshop will host an event to celebrate the life and work of Dawn Foster with @BizK1, @piercepenniless, Lyn…
Help me Twitter. The quote: ""You can cut all the flowers but you cannot keep Spring from coming." is most commonly… https://t.co/Xs7JkiOEd5
RT @the_hindu: #DataPoint | This Thursday, @sonikkalogan takes a look at the #US gun violence epidemic, as mass shootings continue to grow…
City workers get double-digit wage rises while lowest-paid see 1% increase - “Them’s the breaks” https://t.co/XeVyG72iA5
© Gary Younge. All Rights reserved, site built with tlc
Cheap prandin 100 canada Singulair and antihistamines together Alphagan online canada Zanaflex pills online Get imitrex Lioresal online in india Where can you get spiriva How can i buy prandin Can you buy avalide over the counter usa How to buy tarceva