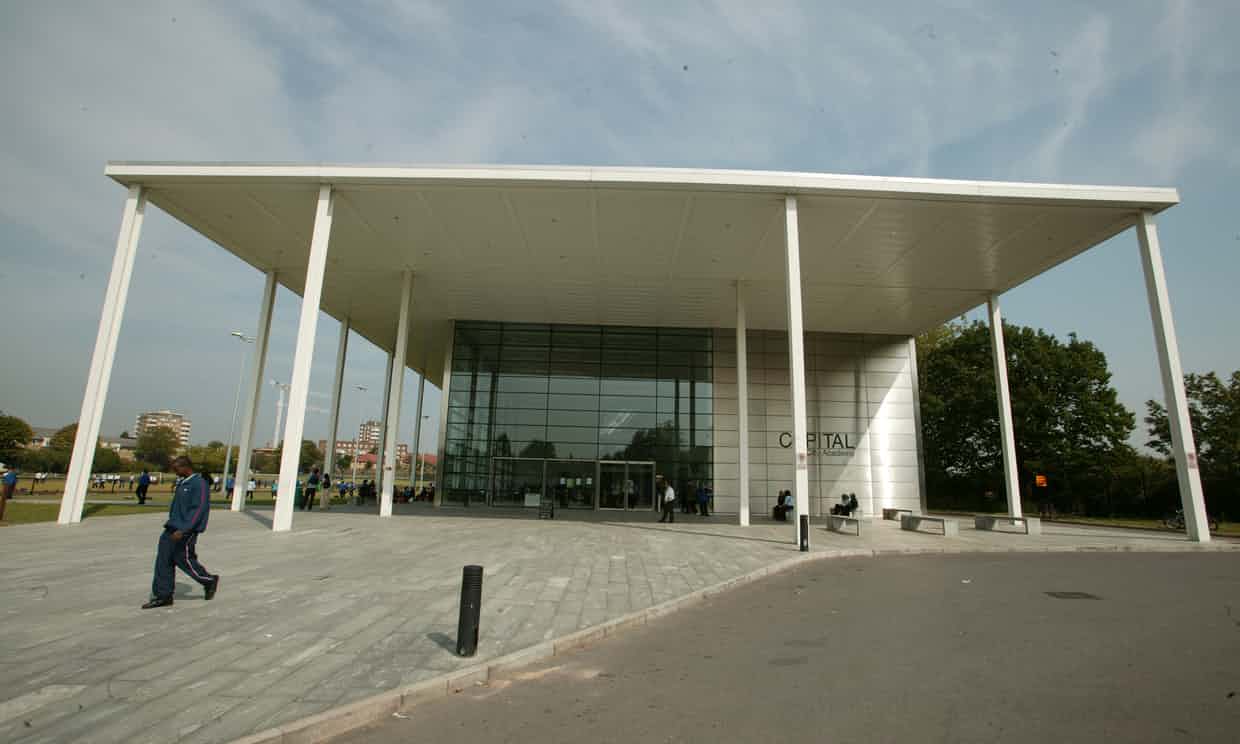 Teenager arrested after pupil stabbed to death outside London school
The Guardian,
Photograph: Martin Argles for the Guardian

A 15-year-old boy has been arrested on suspicion of murder after a boy of the same age was stabbed outside a north-west London school as his fellow students looked on.

Quamari Barnes was attacked while waiting at a bus stop at about 3.30pm on Monday, shortly after the end of the school day at Capital City academy. He was taken by ambulance to a central London hospital where he died.

According to a family friend he was threatened at a bus stop and his assailant chased him as he fled towards school for safety, but the motive for the attack is not yet known.

He is the second London teenager in four days to be fatally wounded in a knife attack. On Friday Djodjo Nsaka, 19, a student at Middlesex University, was found stabbed a few miles away near Wembley stadium.

Throughout Tuesday morning Capital City academy pupils emerged from the school to lay flowers and notes at the entrance gate, clutching each other tearfully or standing quietly together.

One note read: “Quamari was the most positive and energetic person I have ever met. He brought life into everyone’s lives. ‘When one door is closed you know another one is open’ – Bob Marley.”

On Twitter he was celebrated as a “bubbly, happy and also cheeky little boy”.

The school had initially been hopeful that he would pull through, informing parents later on Monday that he was expected to survive, but announcing on Tuesday that he had died.

“It is with overwhelming sadness that Capital City must confirm the sudden death of one of its students on Monday 23rd January,” it said. “Our thoughts and prayers are with the family at this very sad time, and also with friends, fellow students and teachers. [We] will be offering a counselling service to students and staff.”

It is with overwhelming sadness we must confirm the sudden death of one of our pupils.Our thoughts are with the family at this very sad time

One local resident told the Evening Standard Quamari was stabbed three times. “All the kids were running around like usual but then it just went quiet. I got up to draw the curtains and saw kids running away, screaming. Some kids were crowding around another boy who was on the floor.”

One of Quamari’s friends, who did not want to be named, told BBC London Radio: “He was one of the most loved people in the whole of our school. I gave him a hug and said ‘get home safely’ and then I come out of school and I see that he’s stabbed. There’s all these teenagers out here running with knives and guns. What’s the point? Where does it lead us?”

On Tuesday a considerable area around the school and where Quamari had been chased remained sealed off as police went door-to-door and forensic officers combed the area.

DCI Mark Lawson of the homicide and major crime command appealed for witnesses. “A large number of children were going home from school. I would like to hear from them, or their parents, as I’m certain that people will have information that could prove vital to the investigation,” he said.

“While the motive for this stabbing remains unclear, I would also like to speak with anyone who may have heard about what happened after the attack.”

The school is next to a large park at the bottom of a slight incline. “There’s quite a big difference between the top of the hill and the bottom,” said the parent of one pupil. “The bottom is going towards Harlesden which is poorer whereas the top is more comfortable. The school has a real mix.

“I think they do a great job. My son loves it there. Nothing like this has happened around here for a long time. It feels like it’s happening much more often all over now.”

Crime figures published last week revealed a significant increase in knife crime in England and Wales. Some of this can attributed to a change in the way crimes have been recorded. But evidence from A&E wards indicating a 13% increase in hospital admissions for knife wounds suggest that, while crimes involving knives are on the increase, they remain lower than in 2011.

“The warning lights are flashing,” said the Met commissioner, Sir Bernard Hogan-Howe, last week after the figures were released.

A postmortem has yet to be carried out. Anyone with information is urged to call the Metropolitan police incident room on 020 8358 0200 or Crimestoppers anonymously on 0800 555 111.

follow on twitter
Just so we're clear about who's responsible: from the people who brought you Liz Truss and COVID parties. "Employer… https://t.co/UgHRUyiPFu
Covering the Mandela & Obama elections, Katrina, #BLM, guns, knives, riots & statues. Drinking with Maya Angelou… https://t.co/kXVHFQNVNo
RT @thebookseller: "This particular anthology is important to me because it focuses on people, places and issues that have in the past been…
RT @FaberBooks: Dispatches from the Diaspora is available to pre-order, with signed copies available to pre-order from @NewhamBookshop now:…
RT @FaberBooks: Dispatches from the Diaspora: From Nelson Mandela to Black Lives Matter. A powerful, career-spanning collection of @garyyo…
RT @DurrutiRising: Huge mobilisations against the cops in #Athens tonight after a 16 year old Roma boy was shot through the head yesterday.…
A couple months ago I conducted a fascinating public interview with RMT leader @MickLynch4AGS .about everything fro… https://t.co/1zKJwllJW2
RT @SRTRC_England: An exciting new role as head of #humanresources at #ShowRacismtheRedCard Please RT. #educatorsjobs @MichaelRosenYes @gar…
“We didn’t ask for Lady Hussey to resign. But, really, the monarchy must do better on race.” Wanting the monarchy t… https://t.co/Pmo9BYdWnf
RT @mikewhoatv: Riz Ahmed nails it…“where are you really from?” https://t.co/vbL0wJr9dW
© Gary Younge. All Rights reserved, site built with tlc
How to get norvasc without a doctor Lioresal online in india How to get propecia without a doctor How to get renagel online How much does aldactone cost Where is better to buy floxin Buy trazodone online usa Best place to buy stendra online Can i take synthroid and doxycycline together Cost of stendra at walmart