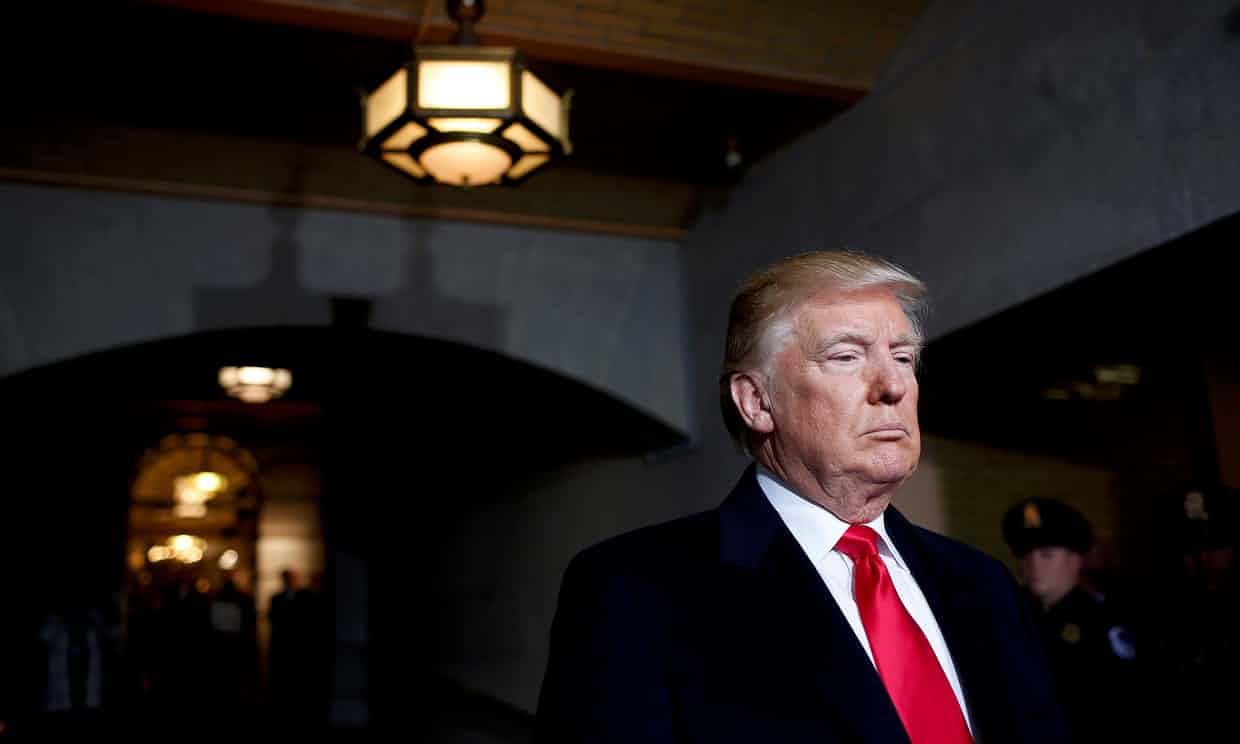 Even the heavens wept. As Donald Trump stepped forward to become America’s 45th president the cold shower that broke over Washington offered no end of metaphors. His address, however, was literal to a fault. There was no higher calling, no sense of a greater purpose, no florid imagery or impassioned idealism. This was as crude and unapologetic an appeal to nationalism as one might expect from a man incapable of rising to an occasion without first refracting it through his ego.

It is said that presidents campaign in poetry and govern in prose. Trump campaigned in graffiti – the profane scrawls of a mindless vandal – and, if his inaugural address was anything to go by, may yet govern in tweets – the impulsive, abbreviated interventions of a narcissist.

Were this a reality TV show, we would have switched off by now. All the better qualified, more sympathetic and empathic characters have been eliminated. The last man standing is a scheming, pathological misanthrope whose disrespect for the rules alone should have disqualified him. The producer would have been fired; the advertisers would have bolted. Nobody in their right mind would want anything to do with it.

But there is a difference between reality TV and something surreal that you can watch on TV. From the robed supreme court chief justice holding aloft Lincoln’s Bible for Trump to swear on to the gathering of former presidents, the entire purpose of an inauguration is to celebrate a mature democracy. As the White House is bequeathed to the popular choice, it’s intended to symbolise continuity and stability – a common destiny in a shared polity.

Friday achieved the opposite. To watch Trump take the oath was to bear witness to democracy’s fragility. It marked not simply the transfer of power from one leader to another but the erosion of the very values that give that power legitimacy.

That frailty stems not from any question about whether Trump won the election but how he won it and what that victory portends. There is more to democracy than elections and more to elections than simply voting. Democratic traditions are underpinned by norms that he not only disregarded (on that score he would not be the first) but brazenly and gleefully violated – advocating violence at his rallies, haranguing the media, fuelling racial animus, religious exclusion and misogyny.

As such, his inauguration represents an indictment of an entire political culture. It leaves condemned a Democratic party that could not defeat him, a Republican party that would not disown him, a mainstream media that failed to scrutinise him and a social media that spread his lies far faster than any scrutiny could travel. All were found wanting. Now all will be tested.

This is no local problem. Those who take to the streets across the globe to demonstrate Trump’s presidency over the next few days would do well to stay there and resist his counterparts in their own backyards. Where this particular threat to democracy is concerned, America is by no means exceptional.

In Washington, the moment was all the more disorienting because of what it replaced. Barack Obama’s approval ratings are higher now than they have been for some time, reminding us of the stratospheric expectations of that freezing January day when he first took office eight years ago. It’s as though his presence could never compete with his promise or his passing.

To watch him accompany Trump through the process was to see the civility of pageantry triumph over the candour of politics. Several of those with front-row seats, from both parties, had concluded Trump was unfit for the office he now holds. “When making life or death or war or peace decisions,” Michelle Obama said six weeks before election day, “a president just can’t pop off or lash out irrationally … If a candidate traffics in fear and lies on the campaign trail … well that is the kind of president they will be.”

That is the president who was sworn in on Friday. No amount of pomp and finery can mask that. That is why what was billed as a ceremony felt more akin to a charade.

It is also why many in the US, and beyond, are not simply concerned about what comes next; they are genuinely terrified. An impulsive braggart and bigot is now in control of the world’s most powerful military and economy. Fear and malevolence won. The hands that once grabbed pussy now have access to the nuclear launch codes.