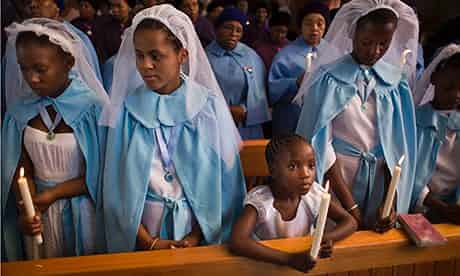 With hips swaying, shoulders bobbing and Bibles held aloft, the congregation at Soweto's Regina Mundi church thanked God for Nelson Mandela. Suited and booted, with shirts neatly pressed and hair freshly plaited, the faithful flocked to this Catholic church, while others went to mosques, temples and synagogues across the country, to pay their respects.

Sunday was designated a national day of prayer, but the supplications varied. Keorapetsa Marasela, 28, prayed that "everyone would come together" while Sy Mokadi prayed for "Mandela's spirit to go well" and George Tsholo, 49, gave thanks that "the Lord had seen fit to give this great man to us".

Ever wary of the hero-worship that marred the credibility of other former freedom fighters, Mandela always recoiled at attempts to canonise him. "I am not a saint," he once said. "Unless you think of a saint as a sinner who keeps on trying."

But that did not stop the congregation nodding in agreement when Father Sebastian Rossouw suggested that "God sent us Madiba". Drawing parallels between those who did not believe in Jesus's impending arrival in the Bible and those who feared apartheid would continue forever, Rossouw said: "We have asked ourselves, where is God? Where is the light? Why does he allow such evil? Why has he deserted us? Why has he forgotten us? … Madiba did not doubt the light. He paved the way for a better future, but he cannot do it alone," he said.

Everyone, he said, had a Mandela in them somewhere.

The priest's words were more than just rhetorical questions for the parishioners of Regina Mundi, which has a history of protest as well as prayer. Those who knew where to look, as they raised their eyes heavenwards, could spy the bullet holes in the church ceiling and windows left by the apartheid regime.

Known as "the people's cathedral" it came by these wounds during the 1976 Soweto uprisings when apartheid police followed demonstrating students, who sought sanctuary, into the church and unleashed gunfire and teargas on them. It has kept them as a badge of honour.

After liberation it played host to the Truth and Reconciliation Commission hearings, presided over by Nobel laureate Desmond Tutu.

But if Soweto is anything to go by then the nation at large seems to be bearing its grief in a festive spirit. On Saturday night, in the township's nearby Vilakazi street, crowds of youngsters danced outside Mandela's former home and poured out of bars to join in resistance songs.

On Sunday in Regina Mundi, there were only dry eyes in the house. "We are celebrating the fact that he lived his life to the fullest and was always humble," said Mokadi.

But the mood seems to go beyond the man to a nostalgic embrace of the moral certainty and sense of resistance that he came to personify. The scenes of people dancing, waving flags and singing about Umkhonto we Sizwe, the military wing of the ANC, feel like a revival of the spirit of 1994 when first democratic elections took place.

That does not mean there is no grief. "Of course we are sad," said Tsholo. "But he was an old man and we had come to expect his passing and prepare for it. It wasn't like Lady Di where one day she was there and the next she wasn't. We knew this day was coming."

"It is a celebration," said Marasela. "But it is diluted with sadness."

Thought it may seem counterintuitive, Mandela's death appears to have injected a sense of hope and optimism in many South Africans by reminding them of the longer journey on which the country has embarked and how far they have come.

Mandela stood against apartheid and for a non-racial democracy – the rest was detail. To vote for him in 1994 was to vote for liberation. Things were black and white back then. Every election since then has been about the details and inevitably things have turned a murky shade of grey.

The transition from resistance to governance does not lend itself well to chants.

There has been progress, but not enough for many. Corruption remains, and by most counts is getting worse. "Mandela was an invaluable teacher of how a politician should be in relation to values," said Mokadi. "The leaders we have now are failing more and more."

Some argue the ANC has lost its way. But even if it hadn't, its path would not be nearly as captivating or clear as 20 years ago. That's why it has to keep reminding people of its achievements. On the drive from Soweto to Johannesburg ANC posters declare: "Free education and meals for 1.1 million learners" and "Gauteng [the local province] now a better place to live."

So the blanket coverage of Mandela, on every talkshow, television station and newspaper front page, helps make historical sense of the hardships that remain and apparently gives heart to some, particularly to those in the townships who never experienced apartheid first hand but are burdened with its legacy.

One song on Vilakazi street called for former apartheid president PW Botha, who stepped down in 1989, to stop harassing former ANC leader Oliver Tambo, who died in 1993. It looked as though few of those singing it were even born when either man was in office.

"Before we couldn't speak our language, we couldn't live where we want. Now we are free and we have hope," says Marasela, who recalls watching Mandela's release on the television with her grandmother as a five-year-old and dancing in the street on the first election day "as though [I] had voted".

How long this mood lasts and what effect it might have if it does is impossible to tell. The day before Mandela died a leaked report alleged the president, Jacob Zuma, had spent 200m rand (£12m) of taxpayers' money upgrading his own house in Nkandla and then lied about it – an accusation he denies.

Nobody's talking about that now. Whether the current ANC leadership can ride this wave of nostalgia or the comparisons will make them look out of their depth remains to be seen.

Ever the populist, Zuma, has given voice to the zeitgeist. "We should, while mourning, also sing at the top of our voices, dance and do whatever we want to do, to celebrate the life of this outstanding revolutionary who kept the spirit of freedom alive and led us to a new society," he said.

"As South Africans, we sing when we are happy, and we also sing when we are sad to make ourselves feel better. Let us celebrate Madiba in this way, which we know best. Let us sing for Madiba."

follow on twitter
RT @nytimes: A Black professor who studies housing discrimination had his house appraised: $472,000. He then did a “whitewashing experiment…
RT @MCRSociology: Gary Younge discusses identity politics and America with Will Hutton in this episode of @thewesocietypod https://t.co/72…
RT @mart_welton: Congratulations to all those getting their A-level results today. If you have BBB at A-level or above you can still apply…
RT @BernardineEvari: Please follow the groundbreaking online #MuseumofColour UK, founded by the unstoppable Samenua Sesher. The 1st gallery…
RT @EthnicityUK: Gary Younge is interviewed by @sonikkalogan about his work on racism and gun violence in @the_hindu #DataPoint podcast. h…
RT @thefreedomi: 🚨 NEW: Saudi women’s rights activist & academic Salma al-Shehab was sentenced to 34 years in prison + 34 year travel ban f…
RT @LRB: #DawnFosterForever! On Thursday 15 September at the @LRBbookshop, @BizK1, @piercepenniless, Lynsey Hanley and @garyyounge will d…
RT @ShowunmiV: This is how we support Black women and girls https://t.co/8YmgV21zHo
RT @sonikkalogan: It's #DataPoint Pod Thursday! In this week's episode, I talk to @noraneus, @garyyounge and @Casey_J_Wooten about the U.S.…
RT @bgnoiseuk: Next month, @LRBbookshop will host an event to celebrate the life and work of Dawn Foster with @BizK1, @piercepenniless, Lyn…
© Gary Younge. All Rights reserved, site built with tlc
Buy viagra online usa Buy discount vardenafil Where can i buy mobic Methocarbamol ibuprofen together What do you need to buy metformin What i should buy with casodex Generic furosemide cost Cozaar online india Buy myambutol online without prescription Celebrex online india