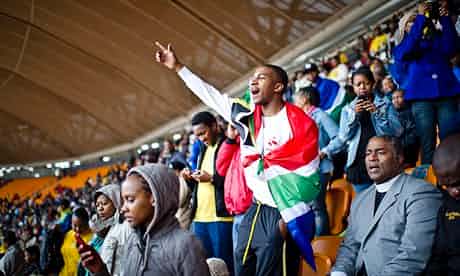 Mandela service: 'He was here for us all those years; now we are here for him'
The Guardian,
Photograph: Gallo Images/Barcroft Media

Sipho brought a hamper; Thule took toilet paper and an iPad; Nicky, who had read the weather forecast, carried just an umbrella. Those determined to get a seat in the World Cup stadium for Tuesday's memorial service for Nelson Mandela in Soweto knew it would be a long day but few could have guessed how wet.

Assuming chaos and a capacity crowd, many arrived early. The service started at 11am but organisers said they would open the gates at 6am; the first free train laid on for the occasion from Johannesburg town centre left for Soweto shortly after 5am and was packed.

It emerged into the sunrise and the suburbs with its passengers chanting freedom songs and trading jokes.

The day turned out not to be too chaotic at all; there were glitches at almost every point but never major ones. The station guards kept changing their minds about which platform the trains would go from – sending people scuttling up and down stairs or off the platform and across the tracks; the stadium didn't let people in until around 6.30am, leaving them standing in the drizzle; it took about an hour to get a hot dog, and the women's toilets appeared to run out of toilet paper at one point.

But these were minor inconveniences and nobody was too put out.

"Relax," Thule told her friend, who was looking at her watch as she stood in line outside the stadium. "He was here for us all those years; now we are here for him. We'll get in."

It wasn't a capacity crowd either. Whether the weather – the drizzle soon turned to a downpour – or the threat of chaos had scared some away was not clear. Because of the large number of foreign leaders arriving the police had shut off the roads nearby making transport to the event tricky. There were still several thousand people; certainly enough to ensure a buoyant atmosphere.

The demographics of the crowd were noteworthy. There were relatively few white people – who comprise one in seven of Johannesburg but couldn't have numbered more than one in 30 in the crowd – raising a question mark over the week's platitude that Mandela's death had brought the country together.

But it was very multigenerational with large number of young people in attendance. "Of course we know him," said Sipho Matlane, 26. "He's always been there. He's like our father and our grandfather. We grew up with him and the chances I have now I have because of him."

From that first train until the first speech the chanting never stopped. Thousands, singing as one, in praise of the ANC's military wing, Umkhonto we Sizwe (Spear of the Nation), Mandela, who founded it, and former ANC leader Oliver Tambo, as well as other staples from the liberation struggle. Pretty much everybody had something – a hat, coat, umbrella, shawl or a flag – that bore the colours of the ANC or the likeness of Nelson Mandela, or both.

So as they danced shuffled and swayed the stadium was carried away on waves of black, green and yellow. At times the crowd stomped so hard you could feel the stadium shake.

The rain didn't dampen spirits. The mood remained not just boisterous but generous and people kept themselves warm by dancing. Almost every dignitary whose face popped up on the huge screen, from the United Nations general secretary, Ban Ki-moon, to former Apartheid leader FW de Klerk, got a cheer. Of course some – Raúl Castro, Winnie Mandela, Robert Mugabe to name a few – got ovations. But even the mention of the prime minister of Trinidad and Tobago got applause where I was sitting.

The sole, notable exception was the sight of the current South African president, Jacob Zuma, who was roundly booed with some rolling their fists over each other as though they were at a seventies disco – a sign symbolising "we want change".

In this the crowd seemed to surprise itself. The booing started off tentatively and dispersed. But once it started others became emboldened until, by the third time he appeared, it was reflexive and widespread. But all in all it was about as jovial and high-spirited as a memorial possibly could be until the actual memorial started.

It wasn't just Barack Obama, David Cameron and the Danish prime minister, Helle Thorning-Schmidt, taking selfies. Most people were. Indeed the degree to which grief has effortlessly morphed into jubilation has been one of the hallmarks of the past week.

It's not difficult to see why. A man who made it his life's work to lead a struggle against a brutal racist regime and was imprisoned for his trouble died, peacefully, in his bed, aged 95 as the world's favourite politician – given the fate of most anti-racist icons, both in South Africa and elsewhere, that is something to celebrate.

But when officialdom took over much of the energy seeped from the crowd as they sat through several testimonies, from religious leaders, former comrades and select heads of states, about how great and unifying a leader Mandela had been.

There was nothing to argue with in any of them. In a sense that was the problem. Nobody needed convincing of Mandela's moral significance. That's why they were there.

"The speeches are boring," said Sweet Coke Maema. "Everybody knows who Mandela is. We know about his life. The whole world knows him. The whole world loves him. It was better when we were singing and dancing."

One speaker, however, was singled out for a particularly warm reception: the US president, Barack Obama. While paying tribute to Mandela Obama spoke fluently and compellingly about the modern relevance of the late leader's life in a manner that kept the crowd gripped. Said Maema with a smile: "His speech is also too long but I like it when he speaks so I don't mind."

follow on twitter
RT @MCRSociology: Gary Younge discusses identity politics and America with Will Hutton in this episode of @thewesocietypod https://t.co/72…
RT @mart_welton: Congratulations to all those getting their A-level results today. If you have BBB at A-level or above you can still apply…
RT @BernardineEvari: Please follow the groundbreaking online #MuseumofColour UK, founded by the unstoppable Samenua Sesher. The 1st gallery…
RT @EthnicityUK: Gary Younge is interviewed by @sonikkalogan about his work on racism and gun violence in @the_hindu #DataPoint podcast. h…
RT @thefreedomi: 🚨 NEW: Saudi women’s rights activist & academic Salma al-Shehab was sentenced to 34 years in prison + 34 year travel ban f…
RT @LRB: #DawnFosterForever! On Thursday 15 September at the @LRBbookshop, @BizK1, @piercepenniless, Lynsey Hanley and @garyyounge will d…
RT @ShowunmiV: This is how we support Black women and girls https://t.co/8YmgV21zHo
RT @sonikkalogan: It's #DataPoint Pod Thursday! In this week's episode, I talk to @noraneus, @garyyounge and @Casey_J_Wooten about the U.S.…
RT @bgnoiseuk: Next month, @LRBbookshop will host an event to celebrate the life and work of Dawn Foster with @BizK1, @piercepenniless, Lyn…
Help me Twitter. The quote: ""You can cut all the flowers but you cannot keep Spring from coming." is most commonly… https://t.co/Xs7JkiOEd5
© Gary Younge. All Rights reserved, site built with tlc
Get pamelor online Can i buy hytrin Can u buy atacand over the counter Brilinta cost canada Can you buy mobic over the counter usa Avodart online canadian pharmacy What i should buy with celebrex How to get norvir without prescription How to get propecia without a doctor How to buy cheap proscar