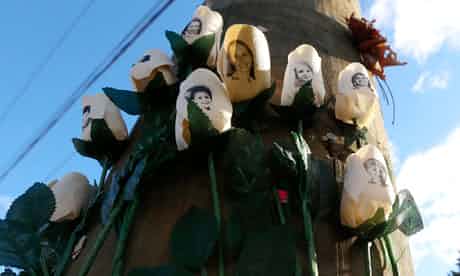 In January, when Barack Obama called for the US nation to put pressure on politicians to pass gun control legislation, he warned: "Every day we wait [the number of Americans who die at the end of a gun] will keep growing." Last Tuesday was set to be one of those days. While legislation lay orphaned in Congress, 20-year-old Michael Hill walked into Ronald E McNair Discovery Learning Academy in Decatur, Georgia, with an AK-47-style assault rifle, 500 rounds of ammunition and "nothing to live for".

With 870 children inside aged between five and 11 years and Hill confessing that he had not been taking his psychiatric medication, the nation was, in all likelihood, staring down the barrel of yet another horrific school shooting.

Luckily for everybody, Hill took as his hostage the school bookkeeper, Antoinette Tuff. What followed was an amazing illustration of calm and brinkmanship by Tuff – all recorded on her call to emergency services – during which she managed to successfully negotiate between Hill and the police.

"We're not going to hate you," she said, referring to him first as "sir" and later as "sweetie" and "baby". "My pastor, he just started this teaching on anchoring, and how you anchor yourself in the Lord," recalled Tuff, who said she was terrified. "I just sat there and started praying."

And so in between updates with the 911 dispatcher she shared her own travails with Hill, telling him about her divorce and disabled son, all the while reassuring him. "I love you. I'm proud of you. We all go through something in life. You're gonna be OK. Sweetheart. I tried to commit suicide last year after my husband left me." Eventually, while keeping police at a distance, she persuaded him to give up his weapons, lie on the floor and give himself up.

After the shootings in Newtown, Connecticut, left 20 children and six adults dead, Wayne LaPierre, the head of the National Rifle Association, insisted the incident was not evidence of the need for more gun control but more guns. "The only thing that stops a bad guy with a gun is a good guy with a gun,'' he said.

Tuff's action shows neither guns nor guys are necessarily compulsory. A woman armed with emotional intelligence, immense poise and copious amounts of empathy can do the job and leave everybody alive.

This incident raises a number of policy issues beyond its own drama: the availability of guns, healthcare (Hill was off his medication because his Medicaid had expired) and mental health services (inadequate provision in the US makes prisons and jails the main facilities, effectively criminalising mental illness). But it also raises two broader cultural points.

First, politicians cannot legislate to ensure the existence of people such as Tuff. And even if they could it would be unreasonable to expect such heroism from anyone. They can, nonetheless, learn a great deal from her. For her generosity of spirit, capacity to humanise the potential shooter and ability to identify with him through her own vulnerabilities do tell us a great deal about what is lacking in our politics.

Our politics, particularly in an age of terror, austerity and growing inequality, is predicated on the basis that people are basically venal, selfish, dishonest and untrustworthy. The poor are assumed not to be looking for work but cheating on welfare; foreigners are assumed to be taking something from a culture rather than contributing something to it; public sector workers, like Tuff, are assumed not to be devoted to public service but a drain on our taxes. The disabled are assumed to be well. When we look at others, the default position in much of western political culture is not to see ourselves in them but to see a threat.

So Tuff's courage stands as the most dramatic illustration of the degree to which we are, and can be, so much more impressive than our politics suggests. Few can do what Tuff did in that moment. And yet many are driven by a similar spirit to help and serve and all have the wherewithal to identify with others.

Examples abound. Like the small working-class Appalachian town of Vicco, Kentucky (population 355), which voted for lesbian and gay equality in January; or Natasha Knotts, who met Hill at her husband's church and set about trying to be a maternal figure for him. "I don't have the papers, but I have the heart," she said.

Which brings us to the second point: religion. For it was in and through her faith that Tuff drew the strength to deal with the situation. That is what religion does for many people. It grounds them. It's the means by which they make sense of the world around them, their place in it and their relationship to others. For many it is the bedrock of their community and identity.

I'm not religious: I'm a lapsed agnostic. I used to not know and then just stopped caring. But I'm a liberal secularist. I believe religion has no role in the state and nobody, including the state, has the right to dictate to women what they should wear.

However, it has become fashionable, particularly among those who think themselves progressive in Europe, to disparage not just faith but the faithful (with particular disdain reserved for Islam). All too often mistaking incivility for satire, those who set themselves up as the arbiters of reason present religion as the source of the world's problems and the religious as its unquestioning dupes.

Leaving aside for a moment where ridiculing the religious leaves the contributions of Desmond Tutu, Martin Luther King, Trevor Huddleston, Bruce Kent, Harriet Tubman, Muhammad Ali, Gandhi and Malcolm X: where does it leave Tuff? A sucker or a saviour?

We can't all be that heroic. But we all deserve a political culture that assumes the best of us rather than pandering to the worst, and the space to find our best selves free from contempt, so long as we don't harm anyone else on the way.

The last word I will give to Tuff. As she hung up on the dispatcher and the police took Hill, she uttered through her tears: "Woo, Jesus."