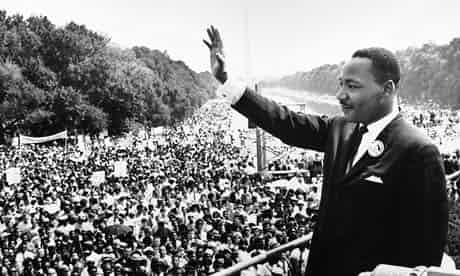 The Rev King didn't dream of better people; he dreamed of a better system
The Guardian,
Photograph: Hulton-Deutsch Collection/CORB

The rented run-down former church on West 130th Street and Lenox Avenue in Harlem, from which Bayard Rustin organised the 1963 March on Washington, "ran on adrenaline and excitement", says Rachelle Horowitz, who organised the transport for the event.

At the end of each day there was a meeting during which Rustin would inform the young activists on developments and they would tell him what they had achieved. The closer they got to the date of the march, the broader and more moderate the coalition supporting it became and the less militant the nature of the march would become.

Originally conceived as a two-day affair that would involve acts of mass civil disobedience, a march around the White House and a speaker's slot for an unemployed worker, rapidly became a one day demonstration with speakers and singers.

Each time Rustin announced that yet another radical element had been dropped, his young staff would berate him, part in jest, part in frustration as a "sell out". "We'd shout: 'Oh Bayard, you're turning it into a circus!'" Horowitz says, laughing now.

Ever the coalition builder, Rustin explained:

But there was one thing on which he would not compromise. There would be no politicians speaking from the platform that day, he insisted. If they came, they would come to listen, not to lecture.

So President Obama's appearance at the podium today to commemorate the 50th anniversary of the march illustrates a significant difference in what has changed over the past 50 years. Half a century ago, the keynote speaker Martin Luther King took to the Lincoln Memorial to speak truth to power. Today the keynote speaker is a black man who represents power. This event, of course, is of a more ceremonial nature than Saturday's event in the same place. And yet there, too, the marchers were spoken at by representatives of the political class: including Attorney General Eric Holder (who's black) and Democratic Minority House Leader Nancy Pelosi, among others.

It would be foolish not to acknowledge the progress this represents. Not only did the civil rights movement make it possible for African Americans to vote in the large numbers that would help Obama win in southern states like Florida, North Carolina and Virginia; it was also responsible for the affirmative action that would get them into college and help them land the kinds of jobs in both the public and private sectors from which America draws many of its politicians.

Nonetheless the sight of civil rights veteran Julian Bond having his mic cut off after just two minutes while Holder got half an hour on Saturday also tells a a different story. For when Obama takes the mic today he will personify, among other things, the ability of individual black Americans to advance even as the movement that might enable collective gains for black people as a whole has perished.

More gains are evidently still needed. The discrepancy between black and white employment rates is roughly the same as it was 50 years ago while, according to the Pew research group, racial gaps in household income and household wealth have actually widened.

So African Americans have greater access to the levers of power even as systems of power operate to pretty much the same effect. As Angela Davis says:

While it would be ludicrous to draw direct parallels between Obama and King (King was a pacifist, Obama has a kill list; King was protester, Obama is president; King had a dream, Obama has drones) they do, however, have one thing in common: their ability to speak across the racial divide. Horowitz recalls:

Obama has a proven ability to do that, too. At times he has used it to raise the national conversation around race. At others he has used it to trot out unhelpful cliches or simply bask in his own symbolism. More than once he has been able to make people feel better about themselves without a single thing actually changing.

But while King – preacher, protester, dissident – could dream, Obama needs to lay out a plan. He's the president. There are things he can say and do about everything from the financial sector to the criminal justice system that have blighted the lives of the poor and minorities. But, like Kennedy 50 years ago, he will only make the pronouncements and proposals necessary if he is forced to. And that will only happen if the civil rights leaders care less about their proximity to power than about representing the interests of their constituents. This comes more by way of critique than criticism. Once codified segregation was defeated – a major victory – the challenge of combating racism became harder, precisely because it was less explicit and had to be understood within the broader context of economic and social inequalities.

Rustin summed up the challenges in a much noted article in Commentary magazine in 1965 titled "From Protest to Power: The Future of the Civil Rights Movement":

Forty eight years later those roots are deeper than ever and cannot be uprooted simply by a change in attitude. King didn't dream of better people. He dreamed of a better system. Obama was elected to run the system. And while he cannot claim King's mantle, he can carry on his work.