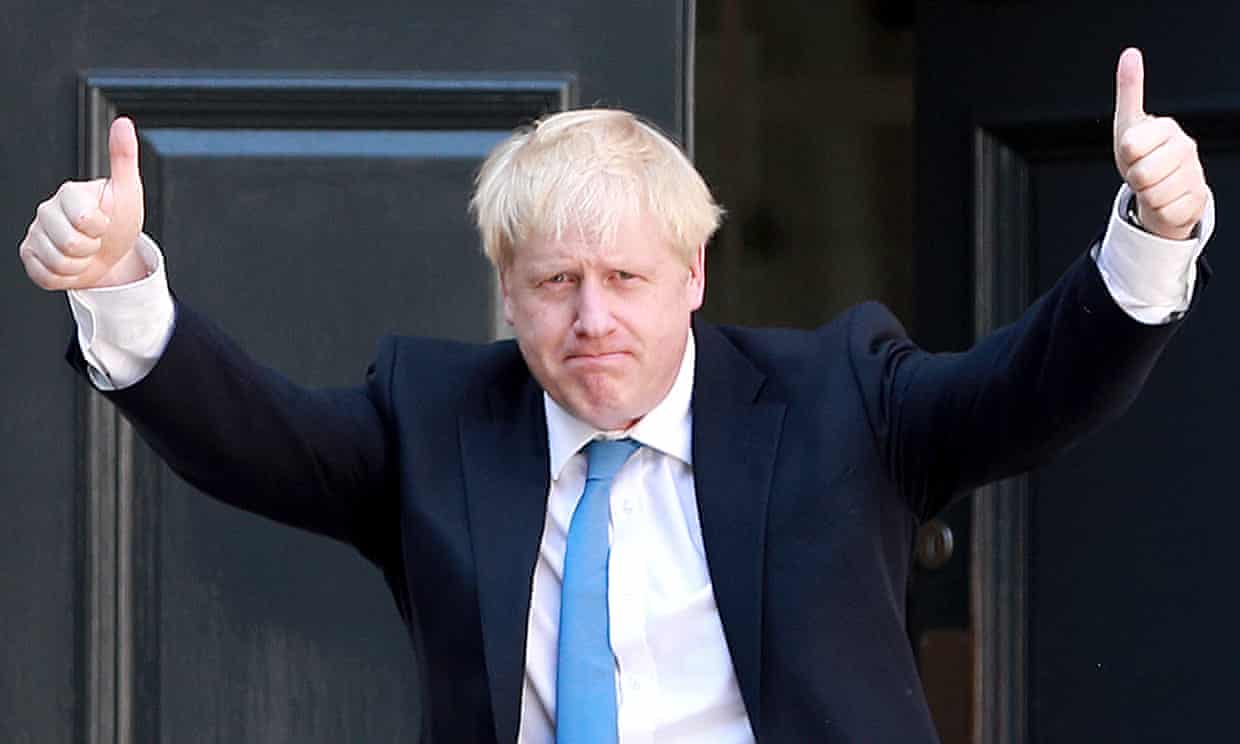 The next prime minister will be Boris Johnson. What now? Our panel responds
The Guardian,
Photograph: Dan Kitwood/Getty Images

What will Boris Johnson do now? Deliver Brexit, unite the country and defeat Jeremy Corbyn, he said today in his victory speech. But how? Some of his most important decisions will be made very shortly – and they will involve who he puts in his cabinet. Johnson is not a details man, or a man who delivers on his promises, or a man with a particularly strong or comprehensive vision for the future. His ministers will decide the country’s next direction.

His top team, then, will have to be competent, and their philosophy, when it comes to policy, will matter too. Then there is the question of balance. Johnson’s verbal obfuscations have steered him through the narrow path between one nation Tories and the hardline Brexiteers. A byelection next week is expected to cut Johnson’s working majority to just two. He will need to keep everyone on side, which means his cabinet will have to represent them.

What of policy? Johnson should ignore any calls to come up with immediate policy programmes that look beyond Brexit: that is missing the point. Under his plans the country risks a disastrous no deal in October – the consequences of which will affect all domestic policy and kill any plans a prime minister had for it. Instead Johnson should prioritise preparing for no deal – we have a lot to do here if we wish to catch up with our European counterparts. This will likely mean bringing forward some new legislation, and preparing an emergency no-deal budget. Johnson used to cite the mayor in Jaws as his hero – but before he draws up full policies on beachcombing and paddleboarding he’ll need to deal with the shark.

• Martha Gill is a political journalist and former lobby correspondent.

The rise of Boris Johnson was only really ever improbable if you were under the delusion that we live in a meritocracy. We don’t. This is the class system in action – propelling confident, incompetent, posh white men to the top regardless of their abilities, record or character. That is the system that produced and sustained him, and that is the system in whose interests he will govern.

His ascent is, of course, a catastrophe for the country. Whether he’s sucking up to Donald Trump, lying about kippers or insulting allies and enemies alike, he is a liability. That the Conservative parliamentary party is in effect at one with the membership on his premiership signals how deep the rot has set in. Where the Tories are concerned, this is not a putsch or a coup – it’s a wholesale makeover and takeover. They have nowhere else to go. And if they go down they’re determined to take the rest of us with them.

There is nothing to celebrate in this moment but the symmetry. The leave campaign had no more plans for leaving the European Union than a dog chasing a car has to drive it. Now its most prominent spokesman is in charge of making it happen. For the past three years they have been able to claim that only if a true believer were in charge everything would be different. With Johnson in charge they are running out of people to blame for the situation they created. That, of course, will not stop them. But it does expose them.

When Theresa May produced her agreement, Johnson said it was like polishing a turd. He was right. He just failed to acknowledge that it was his turd. Now he finds himself with an unfamiliar task for a man of his pedigree – to clean up after himself.

Every new political leader wants to show how different they will be to their predecessor. For Boris Johnson, it will be very easy to presume that being cheerful and getting Britain out of the European Union on 31 October will be enough of a contrast from Theresa May. But he will need more than energy and a “can-do” spirit, as he put it today.

Brexit will certainly occupy his first few months, but Johnson should also have learned from May’s failure to introduce the domestic reforms she claimed to care about the most. You cannot wait for quieter, easier times to work on these changes. For one thing, those times may never come, given Brexit is not going to be over and done with even if Britain does leave in October. And for another, Johnson, like May, cannot assume that he is going to have all the time in the world at his disposal.

Towards the end of his leadership campaign, Johnson demanded cross-party talks to find a solution to the social care crisis. He not only needs to set these up immediately but also lock all the parties in to the policy they eventually develop so that there is not a repeat of previous collapses in talks. He is also about to appoint a new housing secretary, and must choose someone experienced with an ability to deliver tough reforms. He has been worryingly quiet on his support for the domestic abuse bill, which May introduced at the very last minute in an attempt to save it from being forgotten. His excuse may have been that he didn’t want to be presumptuous about domestic policy when he hadn’t yet been elected. Now he’s in place, he cannot be presumptuous that he will have time later on to do the things he thinks are important to change Britain.

Now that Boris Johnson has fulfilled his lifelong ambition, the risk is not that he will pursue a no-deal Brexit, but that he has lashed himself so tightly to the European Research Group (ERG) fanatics that they will carry him, and all of us, over the cliff edge just to feel the wind in their hair on the way down. Can Johnson rescue Britain from the Brexit bind or will Tory members and MPs rue the day they elevated him? Johnson claimed not to be daunted by the task ahead today. But the scale of it is enormous.

Just like Theresa May before him, Johnson has talked up the “threat” of no deal. Yet threatening a colossal act of self-harm is an obvious and self-defeating bluff. Besides, no deal is a process, not a destination: it is plainly unsustainable for the UK to have no agreement covering half its international trade or more than a million of its citizens. Nonetheless, it appears more credible from a man with a history of personal, political and professional recklessness than from a leader who, despite her many flaws, appeared to consider every aspect of life as more a matter of duty than pleasure.

So the UK can either negotiate a deal while still inside the bloc or from a weaker position outside of it. No matter what, there will be an eternal return to the question of the Irish border. Even if the UK were to exit without a deal, agreeing to the backstop and paying the financial settlement will be preconditions of any trade talks. Johnson knows this, and knows that conceding to those conditions after the chaos of a disorderly no-deal Brexit would be a humiliation from which he could never recover.

That’s why it is more likely that Johnson will seek to scrap the withdrawal agreement for a prolonged transition where Britain exits the political union but remains in everything else. During that time, the ERG cabinet he is likely to appoint will be tasked with negotiating a new free trade agreement. But buried beneath it all will surely be either the backstop reimagined or an indefinite continuation of the transition period, with no unilateral exit. That will be a price that many in the ERG will not be prepared to pay – and they may yet have the chance to live out their fantasies of a running jump over the edge.

• Tom Kibasi is director of the Institute for Public Policy Research and chair of the IPPR Commission on Economic Justice. He writes in a personal capacity

Boris Johnson will have no time to savour his victory. During the campaign Johnson sent mixed signals when he pledged to take the UK out of the EU with or without a deal on 31 October – while also saying he wanted a deal. The only way to actually achieve a deal is to actively engage with the EU27, who are far less enthralled with Johnson than the Conservative party membership.

As prime minister, he will begin by a series of visits to European capitals where he will be politely received, but it’s important that he does not mistake civility for support. From the outset, the EU has said what it meant in these negotiations – and meant what it said. There is little appetite in Europe to offer Johnson concessions that were not afforded to Theresa May. Bonhomie and bluster will count for little.

What will Boris Johnson ask for? If he seeks a standstill transition period during which the future relationship is negotiated, he will be refused. The EU will not abandon the backstop or the wider withdrawal agreement: it will be possible, though, to revisit a Northern Ireland-only backstop – the original design – or to achieve changes to the political declaration that specify in greater detail how the backstop provisions would fall away once credible alternatives became available.

Around Europe, they will take note of who is given the Brexit portfolio in a Johnson government. If it is a Brexit ultra, the EU will ratchet up preparations for no deal.

• Brigid Laffan is director of the Robert Schuman Centre for Advanced Studies, and director of the global governance programme, both at the European University Institute, Florence