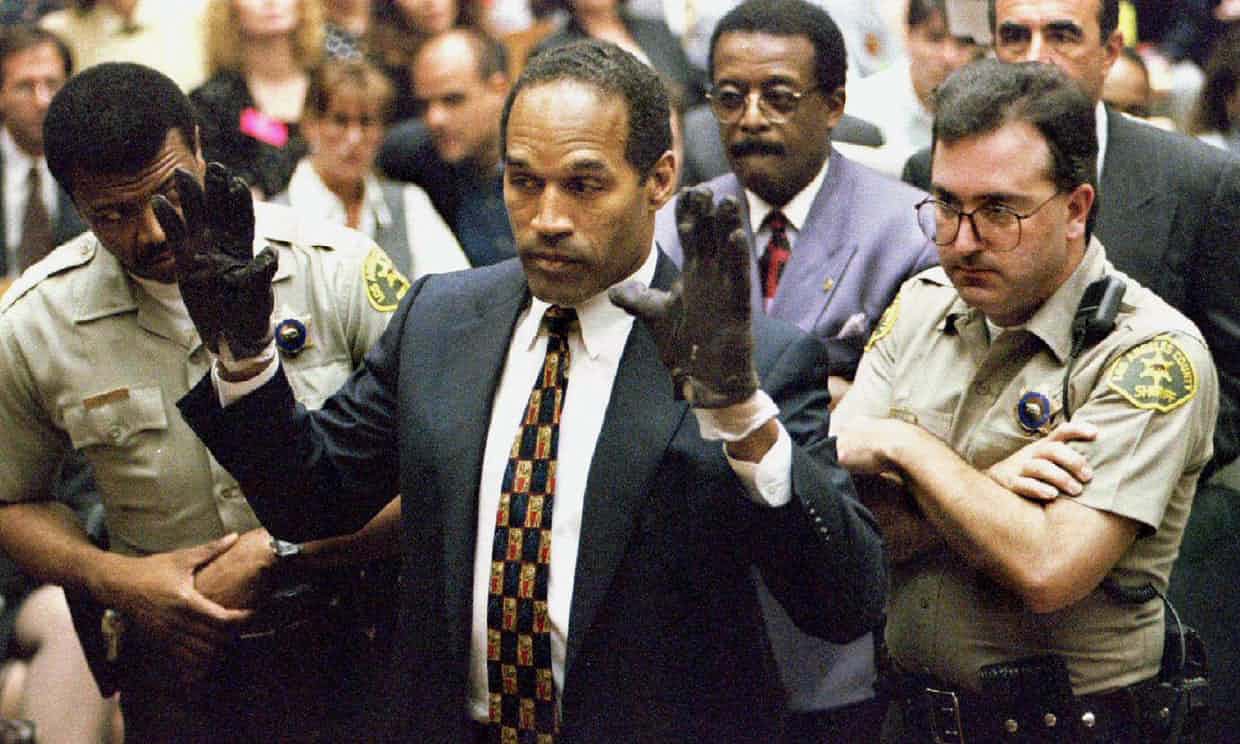 The People v OJ Simpson: 21 years on, celebrity culture has changed but race issues have not
The Guardian,
Photograph: Sam Mircovich/Reuters

“You had a car that flew off a cliff,” one of OJ Simpson’s legal team says to his lead attorney in The People v OJ Simpson: American Crime Story. “It’s missing two tyres, leaking oil and flung into a ravine, and yet somehow you drove us back up the hill.” Such is the level of disbelief within Simpson’s legal camp as it stumbles upon an inchoate defence it believes might be able to counter the overwhelming evidence incriminating their client.

At first sight, the notion that OJ Simpson’s trial might become a successful TV drama seems unlikely. Not only because we know how it ends – spoiler alert: OJ walks. But also because it’s a whodunnit in which we know who did it – there are precious few people out there who seriously believe Simpson, a football star turned actor, did not stab his former wife Nicole Simpson and her friend Ronald Goldman to death.

But the drama – exquisitely acted with marquee names such as John Travolta, Cuba Gooding Jr and David Schwimmer – really resides in looking down at that broken car in the ravine and imagining how the hell anybody in their right mind thinks they are going to get it back up the hill in the full glare of the media. The answer can be summed up in one word: race. 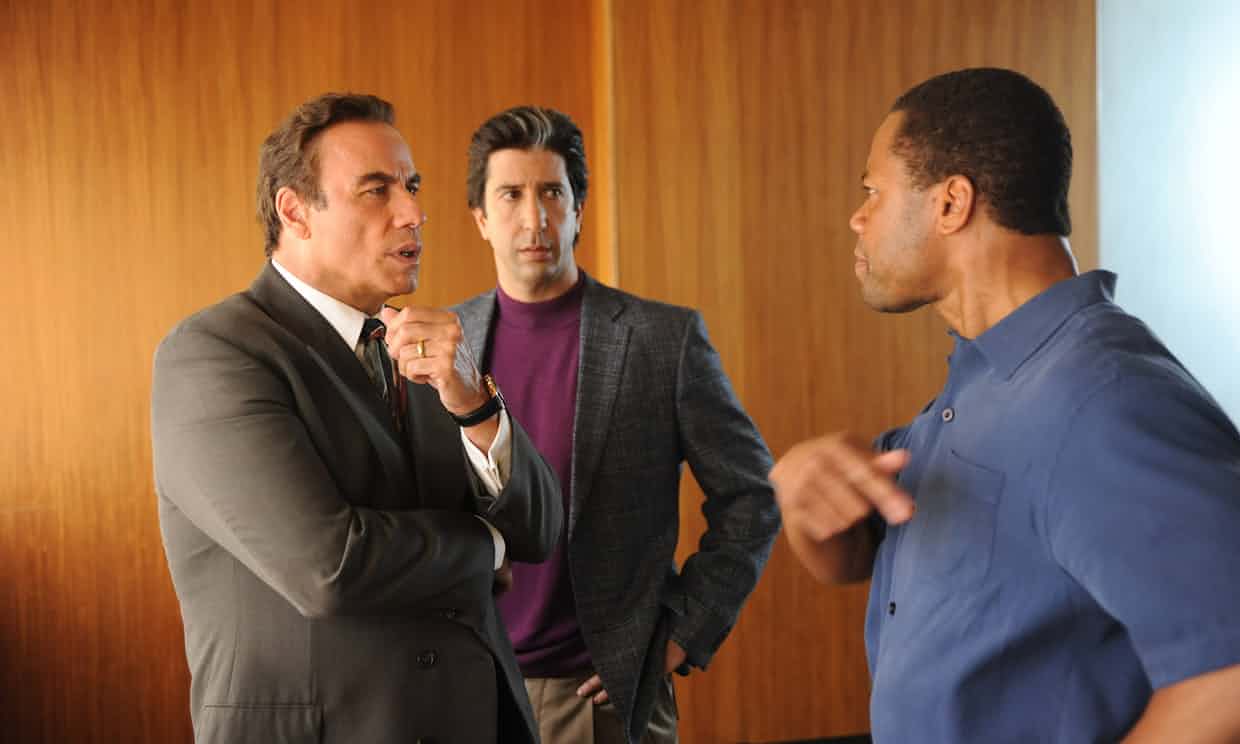 Simpson’s trial took place in 1995, four years after the video of black motorist Rodney King being savagely beaten by Los Angeles police was released (the series starts with the footage), and three years after LA went up in flames following the acquittal of those police. Simpson was acquitted just weeks before the Million Man March, led by black separatist Louis Farrakhan, and several months after the Oklahoma City bombing was carried out by Timothy McVeigh, who had been radicalised by the works of white supremacists. This was the year the US overtook Russia to become the world’s No 1 jailer, with African-American men eight times more likely to end up in jail than white men. Put bluntly, a famous black man was put on trial for brutally murdering his white ex-wife and her friend during a period of acute and mounting racial tension.

So while the the city of Los Angeles put Simpson on trial, Simpson’s lawyers put the Los Angeles police department – and, by inference, the American judicial system – on trial. Yes, one of Simpson’s bloodied gloves was found at the crime scene and the other at his house and his blood matched blood found at the crime scene. Yes, on the morning he was supposed to give himself up for arrest, he fled in a Ford Bronco towards the border holding a gun at his head. But given the endemic and overt racism in the LAPD and the US, which incriminates black men so disproportionately and mistreats them so cavalierly, his lawyers asked, how could you not have reasonable doubt about the veracity of the evidence and the honesty of the testimony against a black male?

Pitting the individual against the institutional and the circumstantial against the systemic, they offered not so much a defence of their client as an indictment of his accusers (sloppy police work helped, too). In an inversion of philosopher Henry David Thoreau’s insistence that “under a government which imprisons any unjustly, the true place for a just man is also a prison”, OJ’s lawyers said: “Under a system that imprisons so many so unjustly, the true place for our man is out of prison.” Once the dividing lines were clear, all that was left was for the country, and the jury, to chose a ditch to die in. Chutzpah got them back to the top of the hill. 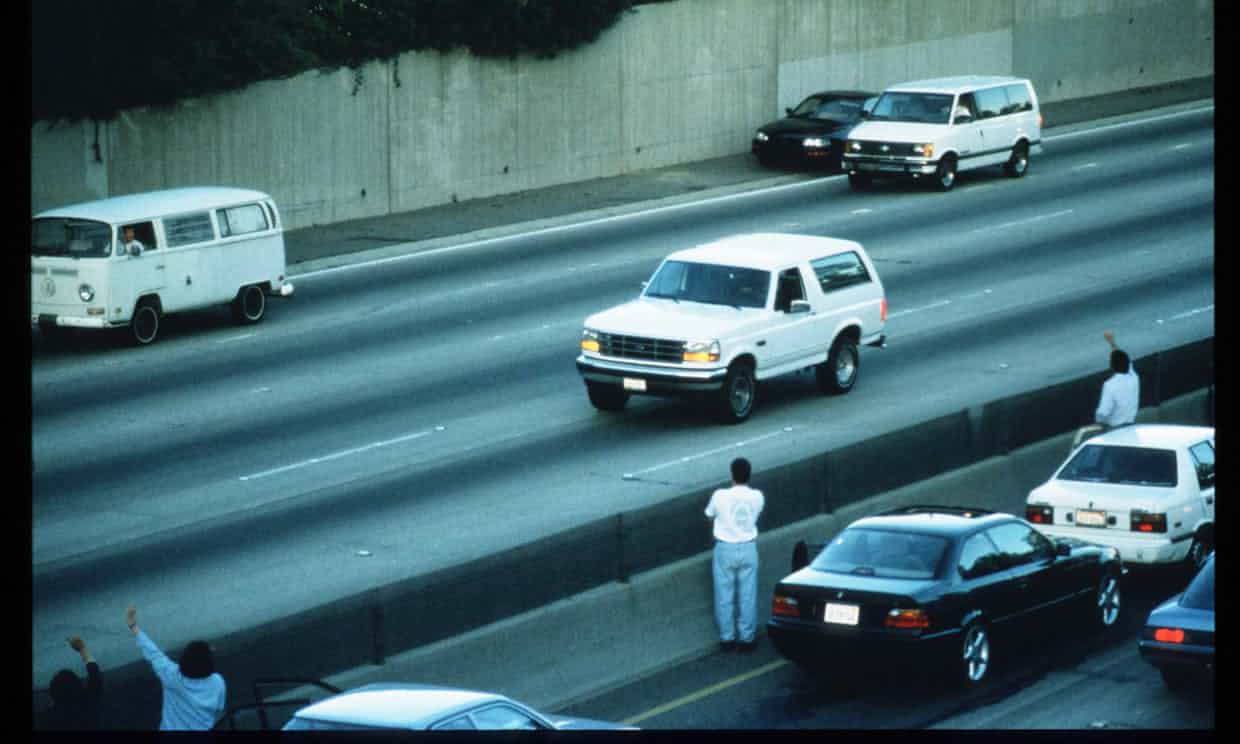 “The negro is America’s metaphor,” wrote the novelist Richard Wright. Simpson certainly became an overdetermined and thoroughly inadequate signifier for racial inequities in general and the plight of black men in particular. He had precious few connections with the black community, was not known for “giving back” once he had made it, played a lot of golf (sometimes as an honorary guest at white-only country clubs) and left his black wife for a younger, white woman (Nicole). Racially ambivalent and politically clueless, at one point during a prison visit he asks his lawyer why his golfing buddies haven’t been to see him in jail. In the televised series (which, with some dramatic licence, seems to be a reasonably accurate portrayal), he resists the emphasis on race in the case until his counsel convinces him it’s his only real hope. He is currently in prison in Nevada, having been sentenced to 33 years for armed robbery.

Nor was race the only metaphor out there. Five years before the murder, Simpson had pleaded no contest to spousal abuse. An emergency call was released to the media in which a terrified Nicole tells the dispatcher: “My ex-husband or my husband just broke into my house and he’s ranting and raving ... He’s going to beat the shit out of me.” The men in the prosecutor’s office are initially predisposed to Simpson. Some have played golf with him and can recall his sporting triumphs; Marcia Clark, the lead prosecutor (and apparently sole woman on her team), who is going through her second divorce as the case unravels, has no idea what they’re talking about.

And then there’s class – or rather celebrity. Throughout, the viewer is keenly aware of the special treatment Simpson is being given – treatment that would not be given to any ordinary white suspect – precisely because of who he is. “What is the protocol here?” one prosecution lawyer asks, as Simpson absconds in the Bronco. The media binge lasts a year and a half. CNN devoted 70 staff to the story; USA Today ran two OJ headlines for every three about the president, Bill Clinton. It was the subject of more stories in the US than the Rwandan genocide, which took place in 1994, the same year as the murder. 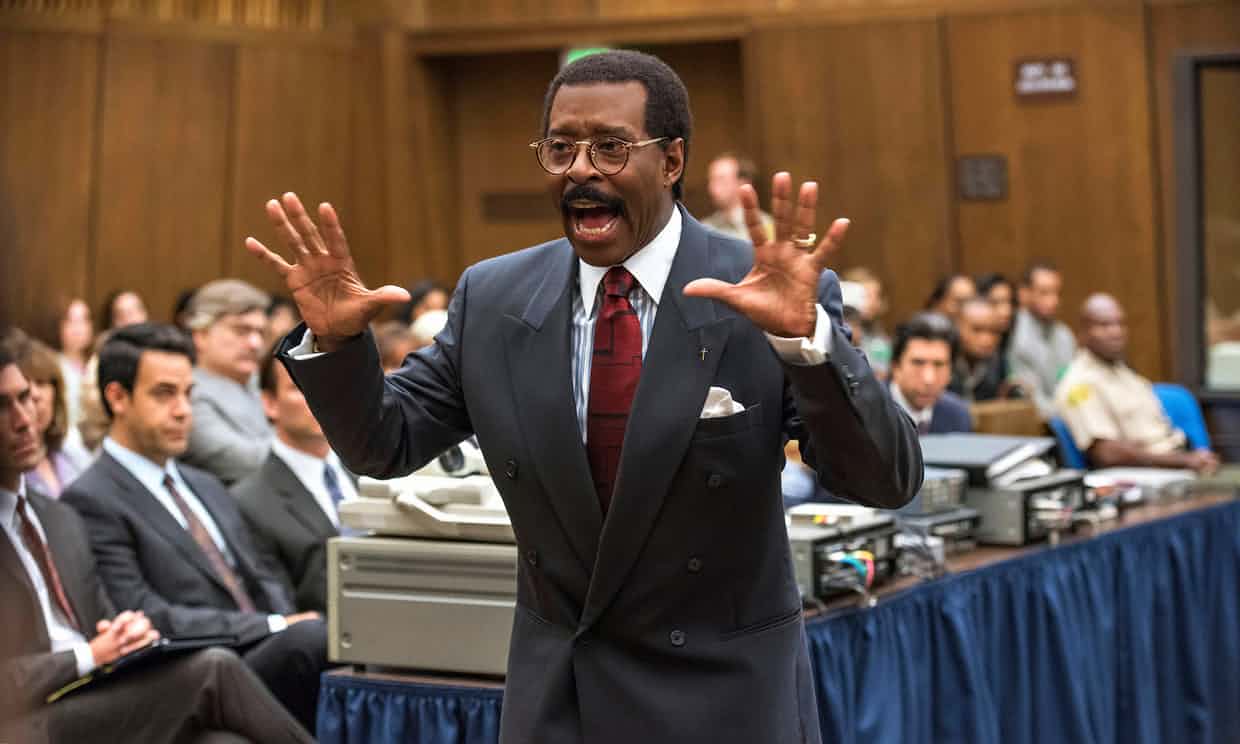 It is primarily the nature of his celebrity that dates the case. Cable news was in its infancy and social media had not yet been born. The character who dates it most is Simpson’s friend Robert Kardashian (father of Khloe, Kim, Kourtney and Rob Jr, and former partner of Kris). Simpson is Kim’s godfather; the kids, all pre-teens, call him uncle. Robert begs Simpson as he stands with a gun to his head: “OJ please, do not kill yourself in Kimmy’s bedroom.” There is a delicious moment – almost certainly inserted for ironic/dramatic effect – in which Robert lectures the children on appropriate decorum now they are in the public eye. “We are Kardashians,” he says. “And in this family being a good person and a loyal friend is more important than being famous. Fame is fleeting. It’s hollow. It means nothing at all without a virtuous heart.”

But if the celebrity factor shows how much has changed, the themes it raises show how much has remained the same. The series is being released 21 years after OJ’s acquittal, in the final year of a black presidency and in a moment of revived racial consciousness and activism around #blacklivesmatter. Racial discrepancies in incarceration have increased since then and confidence in law enforcement among black communities remains low. Bill Cosby’s travails suggest that things will no longer work out quite the same way for a black celebrity. Cosby was a far more iconic figure within the black community, with a record of limited, if controversial, engagement in black issues. But while the notion that he is another black man hounded by the media and law enforcement has been voiced, it has not taken root.

Nonetheless, if a skilful legal team were to mount a defence of a prominent black person in Chicago, for example, and weigh incriminating evidence relating to an individual against the epic wrongdoings of an entire police department, there is nothing to suggest something similar couldn’t happen again. 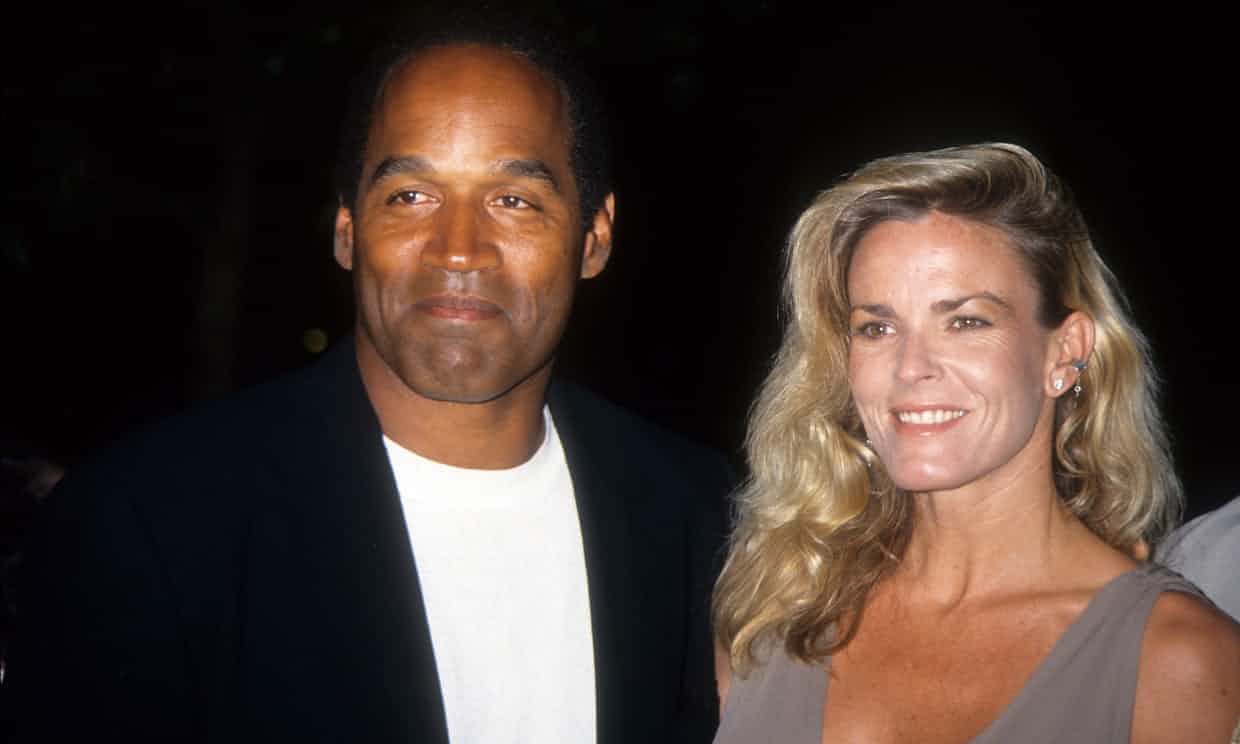 But parallels with a case such as this are hard to draw. “Whatever the verdict,” wrote the essayist and novelist June Jordan, as the trial progressed, “I don’t think the OJ Simpson trial will have deep, profound or lasting resonance in American culture. It will not be transformative. It’s a bad miniseries gone out of control.”

This is a good miniseries about, among other things, a system that remains out of control.