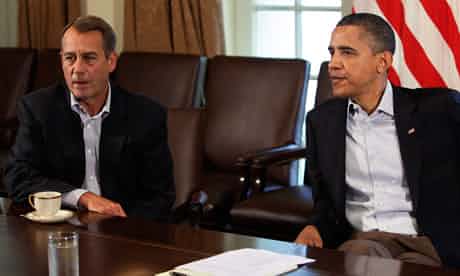 The reckless right in the US is forgetting the basics of participation
The Guardian,
Photograph: Yuri Gripas/Reuters

While campaigning for the Democratic nomination in 2007, Barack Obama sought to sympathise with the farmers of Adel, Iowa, (population 4,653) over the discrepancy between how much they earned for their crops and the price in the stores. "Anybody gone into Whole Foods lately and see what they charge for arugula?" he asked, referring to a high end organic chain. "I mean, they're charging a lot of money for this stuff."

The comment was received in virtual silence. There is no Whole Foods in the state of Iowa. His efforts at identifying with the everyday concerns of rural Iowans instead left him vulnerable to accusations of a cosmopolitan lifestyle and elitist palate.

When it comes to the nomination process, it's what Iowa is for. As the first stop in the process, the state Bill Bryson described as "just flat and hot and full of soya beans and hogs" is supposed to bring candidates from both parties down to earth, by forcing them to engage with their smalltown bases in a bellwether, midwestern state that over the past 10 elections has voted Democrat and Republican five times each. So when the Republicans taken most seriously this year decide they aren't going to take Iowa seriously, it tells you something about the state of their party.

Mitt Romney, the frontrunner, has decided he won't compete in the state's straw poll in Ames this month – an event he spent $1m to win four years ago. Jon Huntsman, Obama's former ambassador to China, will also skip Iowa, in part because he doesn't believe in global warming.

One Romney supporter in Iowa, John Strong, told the Washington Post his candidate was right. "The problem is to win in Iowa you've got to go too far to the right, and it will hurt him in the national election." Sure enough, recent polls have the Tea Party favourite, Michele Bachmann, leading there.

Some Republican grandees argue that Iowa's inability to chose viable candidates risks marginalising its once-crucial kingmaker role. But after a week of Republican mutiny in Washington, it seems they may have got their prognosis backwards. What if the problem with Iowa is not that it's unrepresentative of the party's mindset but that it's too representative – an emblem of how extreme and unbiddable the party has become?

For the main reason the world's wealthiest country finds itself on the brink of default is because Republicans have ceased to operate as a political party. Opposition, for them, is not the role they happen to be playing at present: it is their primary function. Selling his plan to lift the debt ceiling to Laura Ingraham, a rightwing radio host, the Republican House leader, John Boehner, extolled its principal virtues thus: "President Obama hates it. Harry Reid hates it. Nancy Pelosi hates it. Why would Republicans want to be on the side of President Obama, Harry Reid and Nancy Pelosi [is] beyond me." Unwilling to compromise, and therefore unable to negotiate, they behave like a campaigning organisation intent not on holding office to exercise power but seeking office purely to make a statement.

A recent YouGov poll showed two-thirds of Democrats preferred a member of Congress who "compromises to get things done", while two-thirds of Republicans preferred one who "sticks to his principles, no matter what". The result is not just gridlock, but systemic malfunction and legislative paralysis.

On the debt ceiling, plan A for the Tea Party faction was to get everything it demanded. Plan B was to risk a global economic crisis. Last week the contradictions inherent in that approach came to bear. The problems escalated after negotiations between Obama and Boehner collapsed again. Obama and the Democrats have insisted that in any deficit reduction package there must be a mix of raising revenues, through closing tax loopholes that mostly affect the rich, and cutting spending. Republicans, who seem more intent on hammering the poor than nailing the deficit, only want to slash spending.

So Boehner went back to Republicans with a cuts-only plan that would raise the ceiling for a short while and then force another deadline next year. Since the bill would have had to be approved by the Democratic-controlled Senate and Obama before it could become law, it would have stood absolutely no chance of success. So as the nation ambled towards default, Boehner's response was intended as a purely symbolic piece of political theatre scripted for the Republican gallery.

But even the bill that was too right wing to become law was not right wing enough for the Republican right. Eventually, they passed a plan, demanding a constitutional amendment, that stood even less chance than the no-hoper Boehner had originally come up with. It was rejected by the Senate within hours. At the time of writing, America's political class is cobbling together something that will enable the country to pay its bills come Wednesday.

That some Republicans are prepared to dig in so adamantly is in many ways admirable. It is a rare thing to find politicians who see politics as more than a career. Indeed, the centre-left could learn a lot from it. By sticking doggedly to its agenda, the Republican right has, with the help of millions of corporate dollars and its own news channel, managed to shift the political conversation from jobs to debt. This is a considerable achievement. A CBS poll in June showed that when asked what was the most important issue facing the country, 53% said jobs and 7% said the budget deficit. True the two are related. But they are not the same thing at all.

The trouble is that sooner or later one has to turn these rhetorical advances into practical gains – and to do that, a party must be prepared to do a deal. This is not a grubby concession to dark forces but basic common sense. Politics involves negotiation. In the US system, with all its checks and balances, a refusal to negotiate amounts to an inability to participate. It means you can pretty much stop anything; it also means you can get almost nothing done. The Republican party's inability to bring its raucous base into line has cost it, and the country, dear. The point of brinkmanship is to take you to the edge, not over it.

There remains a good chance that politicians will stop the country going broke before Wednesday; fixing the right's political recklessness may take far longer.