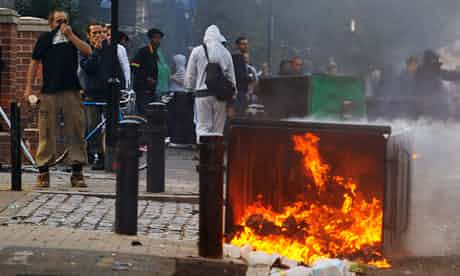 These riots were political. They were looting, not shoplifting
The Guardian,
Photograph: Lefteris Pitarakis/AP

I remember his face. I was on the Boulevard St Michel on a student demonstration. A posh-looking man sitting in a restaurant near the window looked up at the protestors and sneered. I'd seen that look before. I'd been studying in Paris for a few months by then. I'd seen it on the faces of the cops who had beaten me up in the metro and those who stopped and questioned me almost daily, or the landlords whose available flats disappeared when I showed up. It was a look that told me I didn't matter and couldn't do a thing about it.

On the Boulevard St Michel a young black kid also saw the sneer, walked coolly up to the window, and kicked it in. And between the shards, the face of the man at the table contorted in fear as the thin film that separated him from chaos collapsed. The kid walked off laughing.

I can't tell you why he did it. You could not justify it strategically or morally. What I can tell you is, at that precise moment, given the few options available, it felt like an appropriate response. Sometimes, even when it is not possible to fathom the direct cause of an event, the context in which it took place offers many clues.

So it is with the recent riots. Attempts to establish a definitive reason for what happened last week inevitably implode under the weight of their own dogma. With unrest sprawling over various nights in various cities with different targets and intensity, the situation is too complex for any one template.

True, the initial riots in London's Tottenham did have a direct cause – the fatal shooting of Mark Duggan by the police, who then refused to engage with his family and supporters about the circumstances of his death. It's unlikely the other riots would have followed without this one. And yet even as the fires burned in neighbouring Hackney a few days later, no one chanted his name or made demands on his behalf. And so it was that a political demonstration which ended in violent disorder triggered a series of unrelated violent disorders devoid of any political coherence.

Long before it became clear that we were heading for a double-dip recession, the notion that a single dip on this scale would cause social unrest was not just predictable but predicted – not just by the left but by, among others, the guardians of global capital.

Warnings came from the new head of the International Monetary Fund, Christine Lagarde; the police; the ratings agency Moody's and the UN's International Labour Organisation. As the deputy prime minister, Nick Clegg, pointed out before the last election, the likelihood of unrest would be exacerbated under conditions of economic austerity: "Imagine the Conservatives go home and get an absolute majority, on 25% of the eligible votes," Clegg said. "They then turn around in the next week or two and say we're going to chuck up VAT to 20%, we're going to start cutting teachers, cutting police and the wage bill in the public sector. I think if you're not careful in that situation … you'd get Greek-style unrest." The Tories got 23% of the eligible vote. Despite not winning an absolute majority, it all happened anyway.

Despite historian David Starkey's best efforts, the epicentre of Britain's moral panic moved from culture to class. The primary challenge of integration, it transpires, is convincing a sizeable section of British youth, of all races, that they can be integrated into a society that won't educate or employ them.

Insisting on the criminality of those involved, as though that alone explains their motivations and the context is irrelevant, is fatuous. To stress criminality does not deny the political nature of what took place, it simply chooses to only partially describe it. They were looting, not shop-lifting, and challenging the police for control of the streets, not stealing coppers' hubcaps. When a group of people join forces to flout both law and social convention, they are acting politically. (The question, as yet unanswered, is to what purpose.)

In any case, far from being strange bedfellows, criminality and politics have always cohabited quite happily. Less than a month ago, some of those now bellowing for more law and order (the Murdoch press), the people who are supposed to enforce law and order (the police), and the people who make the laws (politicians) were caught red-handed either committing or colluding in a range of systematic criminal acts during the phone-hacking scandal.

But likewise, insisting on economic deprivation, as though that is the sole context and alone explains their motivations, is only marginally less fatuous. While it was the young who took to the streets, this was not a Greek-style uprising, let alone a distant cousin to the Arab spring. Riots can produce tangible, progressive results. But beyond Tottenham, those who took to the streets last week failed to advance any cause, embrace any ideal or articulate any agenda.

This places them firmly in the context of a weak an ineffectual left that has failed to reinvent and reinvigorate itself in the face of a deep economic crisis. It marks a generational failure. In the absence of any community leadership, viable social movements or memory of collective struggle, the most these political orphans could hope to achieve was private acquisition and social chaos.

The fact that their actions were political does not therefore make them wise. The primary consequences will be greater authoritarianism, more police powers and an emboldened far right.

While in Spain in March, I asked Ignacio Escolar, the author of the country's most popular political blog, why there had been no demonstrations when the youth unemployment rate was 43%. "It's like there is oil on the streets," he said. "All it needs is a small spark and it could blow." Nobody knows where the next spark in Britain will come from. But last week we saw that our streets too are highly flammable.

follow on twitter
During lockdown some people learned to bake sourdough. My partner, who sings in @londonoriana , took up composing.… https://t.co/LPViWc7Jof
"I was the only kid of colour on the track. And I’d be getting pushed around. But then I could always turn their en… https://t.co/R5JlNovOgH
RT @SimonFRCox: “I feel like I was built for this.” ICYMI ⁦@LewisHamilton⁩ talking to ⁦@garyyounge⁩ - 2 Black men from pretty white Stevena…
RT @HowToBe247: 📚 Author interview Veteran journalist and Why Are We? author @garyyounge talks about how #identity #politics terms are use…
RT @HowToBe247: NEW PODCAST EPISODE! Honoured to have spoken to veteran journalist, sociology professor and Who Are We? author @garyyoung…
RT @williamcson: it would be wise to not wait for an imagined announcement declaring “fascism is here.”
RT @Emmajourno: I'm looking into the impact of health visitor shortages on children and families. So a) any HVs happy to talk to me about t…
RT @DoubleDownNews: The Irony Roll back of reproductive rights under pro-life & easy access to lethal weapons, advocated by same people T…
“Boris Johnson has clearly decided that if he’s going down he’s taking the country with him.” My piece @thenation https://t.co/ZZoRdcTVRo
RT @hughlaurie: I don’t know enough about the rail dispute. I only observe that RMT’s Mick Lynch cleaned up every single media picador who…
© Gary Younge. All Rights reserved, site built with tlc