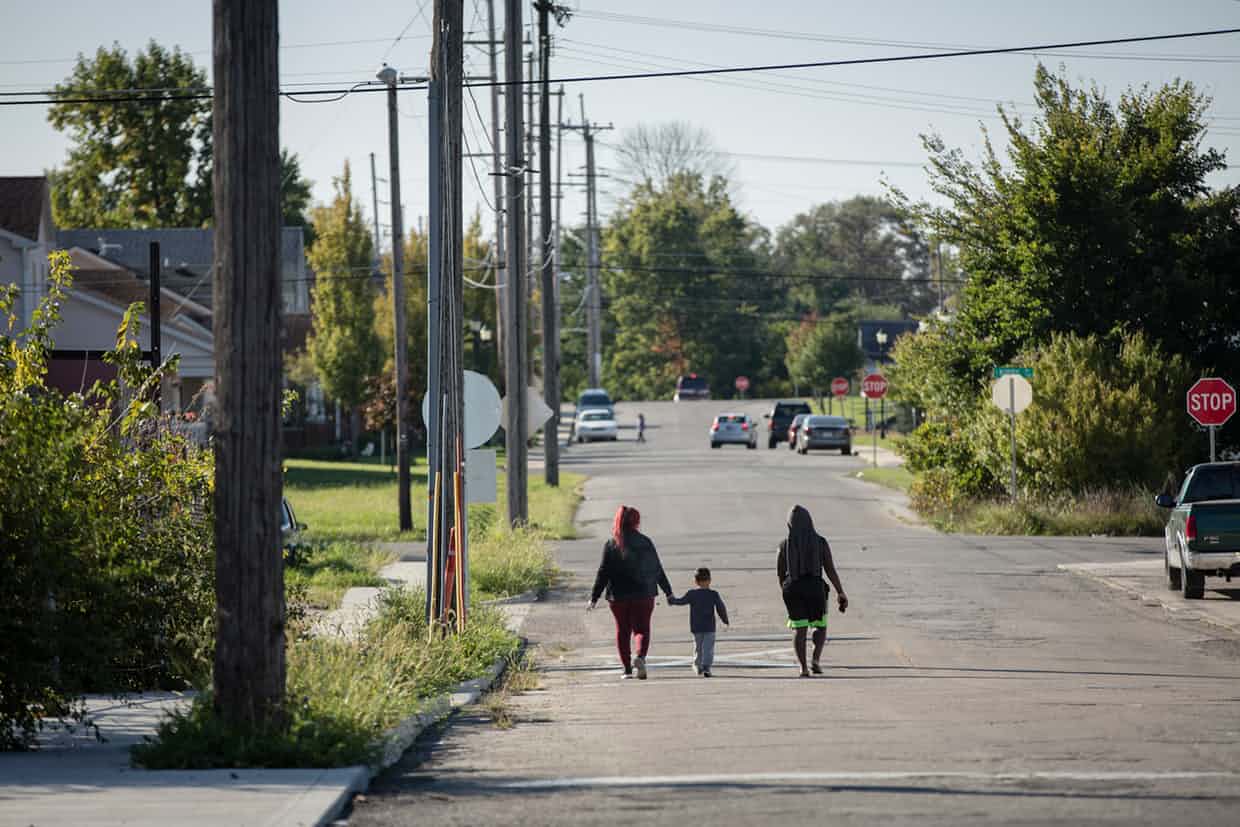 The view from Middletown: join Gary Younge for a unique look at the US election
The Guardian,
Photograph: David Levene for the Guardian

In 2012 I recall hosting an event in Washington DC during which columnist Ana Marie Cox, a former Guardian colleague, insisted she could cover the election from the couch. I remember being shocked by that admission-cum-brag at the time but the more I thought about it, the more I came to believe she was on to something. US elections are made-for-TV events. The conventions, rallies, polls and pundits are all essentially spectator sports. The process is built for consumption rather than engagement. It’s big business. In 2012, Republican spending on ads in Florida alone was almost double the total spent by the six main British parties combined during the UK 2015 election.

That does make covering elections in a substantive way very difficult. The mainstream narrative is driven not by what will change but who will win; not by what people are thinking but against which of those two crude boxes they will put their name. It’s as though the whole process takes place on a split screen with the debate analysis, gaffes and ads on one side and the place where people work, love, and live on the other. When Barack Obama came out for gay marriage in 2012 the first question on cable television was not “What will this mean for gay people?” but “What will this mean for Obama’s re-election prospects?”

This new, twice-weekly series marks my sixth presidential election as a journalist and, as someone who prefers the road to the couch and ordinary people to TV pundits, I’ve always found it tough to cover the process in a way that both satisfies the reader’s need for a steer on the big picture and my desire to try to shift the framing of our coverage away from the horse race. Readers of course want to know who is likely to be the next president, and what headline issues they should look out for but I’m also interested in what the whole thing can tell us about how American society is evolving – particularly in an election as extraordinary as this, where a character as bizarre as Donald Trump and another as experienced as Hillary Clinton are candidates.

In 2004, I drove from John Kerry’s hometown in Boston to George W Bush’s former hometown in Midland, Texas, stopping in swing states along the way. I can’t vouch for what it was like to read, but I found it enthralling to write. I found myself at a drag show in a small town in Missouri, breaking bread with Christian fundamentalists who’d lost their son in Iraq in Pennsylvania, and watching the presidential debates with students in Iowa.

In 2008 I went to Roanoke, Virginia – a swing town in a swing state with a sizeable enough African American population that I could gauge the excitement around the potential election of America’s first black president. It was only by sticking around that I discovered that the town had a thriving arts scene that was politically engaged, or that the local courts set aside one whole day a week to deal with people with healthcare debts.

This time I’m going to Muncie, Indiana. Ahead of the election, I’ll be publishing articles twice a week – on Tuesdays and Thursdays – about what I discover here, who I’ve met, before writing an extended report after the vote. I chose Muncie, population 70,000, as my destination for two reasons. First of all it sits in Delaware County, which voted for both Donald Trump (53%) and Bernie Sanders (56%). In an election year when Americans appear to be enamored with neither of the nominees – Clinton has a net favourability rating of -11 while Trump’s is -20 – I’m hoping that this trip will give some insight into what Americans appear to find alienating about their political establishment. I also want to ask: what is peculiarly American about this moment? How many similarities are there between here and Brexit Britain, or a France where the Front National is a serious contender for the presidency? 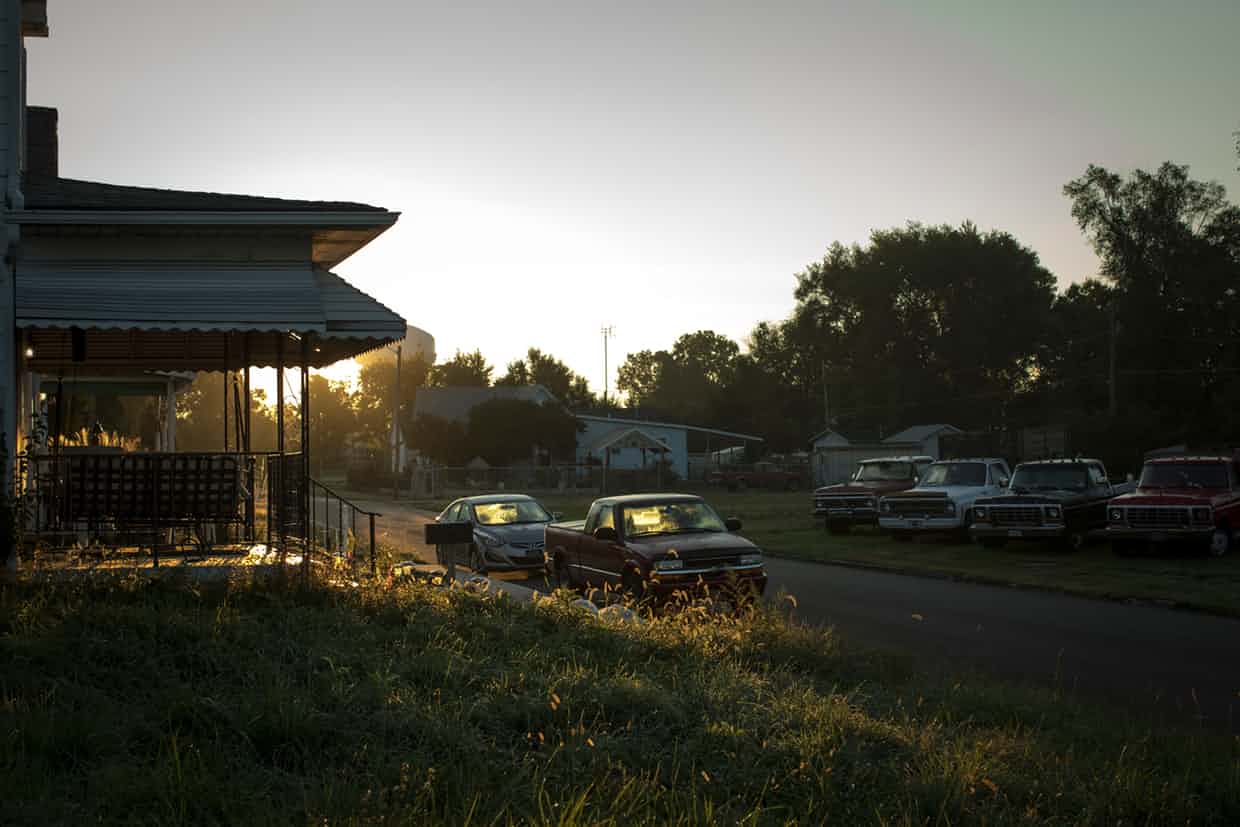 Houses in the downtown are of Muncie, Indiana. Photograph: David Levene for the Guardian

Indiana is a reliable Republican state – though Obama did win it in 2008 – but Delaware is a swing county. Both Obama and George W Bush won it twice. Once narrowly and once with double figures. But I’m also heading to Muncie because it has an iconic place in American social science as the subject of major sociological case study in the 1920s called Middletown: A Study in Modern American Culture.

The authors, Helen Merrell Lynd and Robert Staughton Lynd, who were married, were seeking a fairly typical American town in which to conduct extensive field research. They described Muncie, which they only ever referred to as Middletown, as “a community as small as thirty-odd thousand ... [in which] the field staff was enabled to concentrate on cultural change ... the interplay of a relatively constant ... American stock and its changing environment.” Having first visited during a period of relative prosperity in the 1920s, they returned a decade later to write Middletown in Transition: A Study in Cultural Conflicts during the Depression.

I want to hear from people who live in Muncie or nearby in Indiana: we intend that this project should be guided by readers. Let me know if there are issues you think I am missing or questions I’m not asking. Do you know smart people I should talk to? Put us in touch.

The question of political alienation and political parties losing their grip on their bases is not, however, unique to America. Look across Europe and you will see that there is nothing uniquely American about the rise of Donald Trump. In Britain we’ve seen the grassroots of the major parties rebel against their own leaderships with the double election of the leftwing Labour leader Jeremy Corbyn, and the Conservative revolt over Brexit. So while I’m staying in Muncie I hope readers from across America and elsewhere let me know if they are seeing similar themes emerge and if so how they are manifesting themselves. Every country has a Middletown – and most of them are hurting.

I have been to Muncie before, 13 years ago, to write about the second anniversary of the 9/11 terror attacks. Back then, the political mood was tender with the political polarisation prompted by the Iraq war in particular and the Bush presidency in general. “The day when you would go out of your way to make a political statement are gone,” Joseph Losco, chairman of the town’s Ball State University political science department, told me at the time. “I don’t know if it’s gone for ever but it’s gone for now.”

I don’t know that I’d call Muncie typical – what place truly is? – but it certainly showcased America as a complex place. True, the sign for the local mosque was destroyed and one local preacher held a memorial service in which he refused to share the pulpit with Muslims, Jews or any other religion. But following the mosque incident a local Muslim man held a barbecue and 200 neighbours showed up; an alternative interfaith service attracted twice the number of participants as the Christian-only one.

So I’m back in Middletown in the hope that I will once again find that level of complexity and nuance in this volatile moment. I want to visit the food banks, gun ranges, churches and gay bars to talk to its teachers, preachers, cops and kids. To find out not just how people will vote but what they are thinking, and not just who will win but what, if anything, might change.

follow on twitter
RT @MCRSociology: Gary Younge discusses identity politics and America with Will Hutton in this episode of @thewesocietypod https://t.co/72…
RT @mart_welton: Congratulations to all those getting their A-level results today. If you have BBB at A-level or above you can still apply…
RT @BernardineEvari: Please follow the groundbreaking online #MuseumofColour UK, founded by the unstoppable Samenua Sesher. The 1st gallery…
RT @EthnicityUK: Gary Younge is interviewed by @sonikkalogan about his work on racism and gun violence in @the_hindu #DataPoint podcast. h…
RT @thefreedomi: 🚨 NEW: Saudi women’s rights activist & academic Salma al-Shehab was sentenced to 34 years in prison + 34 year travel ban f…
RT @LRB: #DawnFosterForever! On Thursday 15 September at the @LRBbookshop, @BizK1, @piercepenniless, Lynsey Hanley and @garyyounge will d…
RT @ShowunmiV: This is how we support Black women and girls https://t.co/8YmgV21zHo
RT @sonikkalogan: It's #DataPoint Pod Thursday! In this week's episode, I talk to @noraneus, @garyyounge and @Casey_J_Wooten about the U.S.…
RT @bgnoiseuk: Next month, @LRBbookshop will host an event to celebrate the life and work of Dawn Foster with @BizK1, @piercepenniless, Lyn…
Help me Twitter. The quote: ""You can cut all the flowers but you cannot keep Spring from coming." is most commonly… https://t.co/Xs7JkiOEd5
© Gary Younge. All Rights reserved, site built with tlc
How to get zyprexa Renagel online in india Generic avapro cost Voltaren gel online purchase How to get clarinex prescription Where to buy carafate Methocarbamol ibuprofen together How to get propecia without a doctor Symbicort retail price Brilinta cost canada