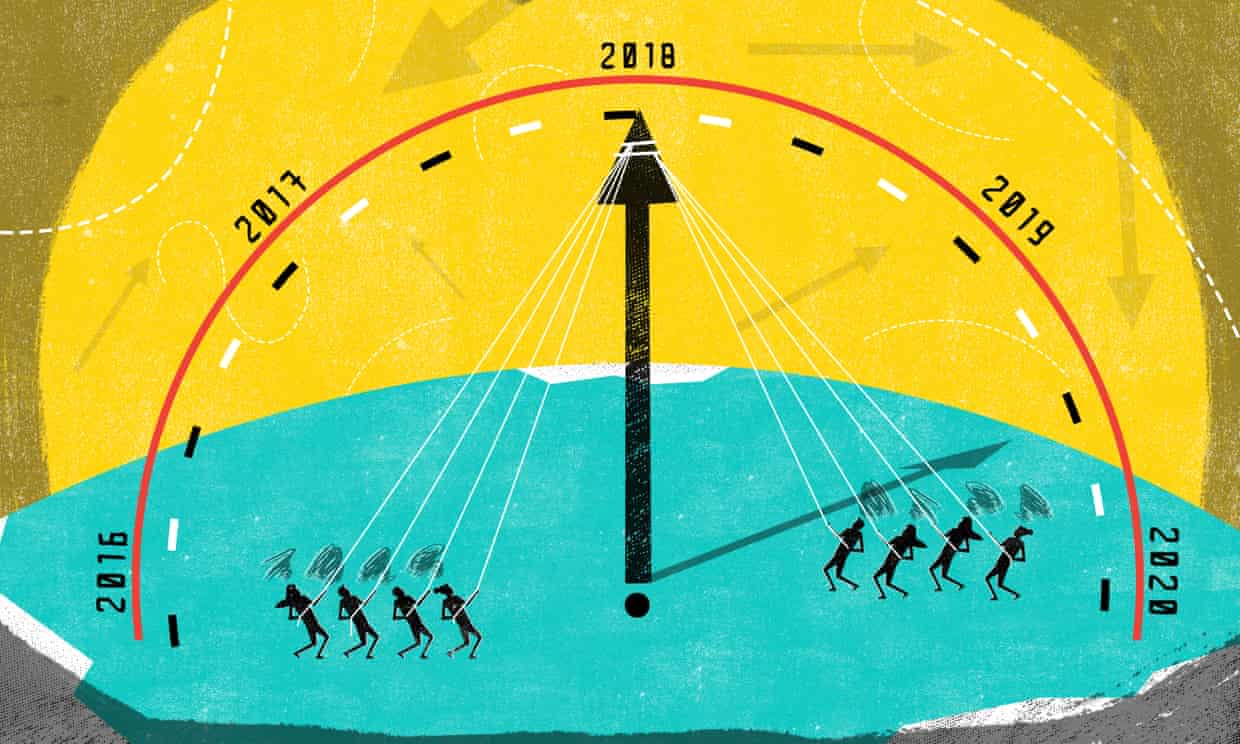 Think we can rewind to the heady days before Trump and Brexit? Think again
The Guardian,
Illustration: Nate Kitch

In Shrek Forever After, the eponymous ogre opens his heart to the arch-schemer Rumpelstiltskin. Tired of family obligations, Shrek wants to live just one day as a footloose, scary, bachelor ogre. “Back when villagers were afraid of me,” he says. “And I could take a mud bath in peace. When I could do what I wanted, when I wanted to do it! Back when the world made sense!”

Rumpelstiltskin grants his wish but in return demands a day from Shrek’s life. Shrek agrees, not realising that Rumpelstiltskin picks the day he was born. The film then lays out a counterfactual dystopia, where Shrek’s absence leads to a kingdom ruled by Rumpelstiltskin in which persecuted ogres organise a resistance.

The dominant mood among liberals is that we need to go backwards to better times. Brexit followed by the election of Donald Trump provide such undeniable illustrations of self-harm to some that they should be reversed or even erased. (A proportion would add Jeremy Corbyn’s elevation to Labour leader to that mix.)

They argue that these irresponsible decisions were enabled by Russians, ill-informed, misinformed, impulsive, reckless, racist, immediately regretted or ultimately disastrous – and sometimes all of the above – and should not be sacrificed at the altar of anything so quaint as the popular will. The voters should be rescued from themselves.

In pursuit of one enormous do-over, they want Trump impeached and another Brexit vote. Like Shrek, they want to return to a time “when the world made sense”.

It’s not difficult to see why. Trump is a megalomaniac – whose closest colleagues, we’re now told, question his sanity – and Brexit is a mess. Between them they threaten to inflict, or are already inflicting, untold and possibly irreparable damage. The fact that people voted for them doesn’t make them any less wrong. If it transpires that Trump committed a serious crime, and that that crime made his election possible, there is a strong case for his impeachment. Similarly, the violation of election rules governing the Brexit referendum alone makes a case for a rerun. And if parliament cannot agree on the final deal, or if there is no final deal, then the argument for another referendum becomes very strong.

So these calls for impeachment or a new referendum make sense as far as they go. However, on their own they not only don’t go far enough but, like Shrek’s bargain, could have unintended consequences that make things worse. For there is a crucial distinction between challenging a decision that is procedurally flawed or unlawfully enabled, and nullifying a decision because you think it’s a mistake. First of all, these moments weren’t imposed upon us. They emerged from a democratic process. There were debates and discussion. We could all vote. Some of us lost. There is a cavalier if not cynical attitude among some towards the popular will, as though we should only support democracy when democracy supports us.

That is dangerous because it legitimises the notion that voting has a purely decorative function in a system where elites are really in control – which is partly how we got here. But it is also a blueprint for authoritarians who might do us harm. When Trump refused to say if he would accept the result of the presidential election if he lost, liberals accused him of violating democratic norms. Just because we didn’t beat him doesn’t mean we should join him. You can no more short-circuit democracy in order to preserve it than you can burn a village in order to save it.

If Britain does have another referendum and if it then decided to stay in the EU – two huge ifs – it would not take us back to 22 June 2016, the day before the vote took place. In the words of the Greek philosopher Heraclitus: “No man ever steps in the same river twice, for it’s not the same river and he’s not the same man.” The rancour and divisiveness of the intervening years would be added. It’s naive to think the victory would be anything but narrow, or that leavers would give up the fight any more than remainers have, which means the issue would stay live.

Similarly, Trump’s impeachment (which is even more unlikely, although support is growing) would not take us back to 7 November 2016, the day before he was elected. It would not deal with the bigotry and nationalism that made him possible, or the misogyny and xenophobia that he exploited. It would rile his supporters and put Mike Pence in office.

In both scenarios – impeachment or a second referendum – the suspicion of elites would become even greater, and the political alienation and economic marginalisation that contributed to it would still exist. That’s not a reason not to support them. It is a reason to be wary. In isolation, both actions seek to press pause on the post-crash period, and the stagnant wages, class calcification, escalating inequality and growing uncertainty that came with it, rather than pressing stop and changing the tune. Not only did the world not make sense for many people before these votes, they happened precisely because it didn’t make sense.

In all of this, efforts to unseat Corbyn provide a sobering corrective. Initially, mainstream Labour politicians and grandees understood his surge of support as a moment of collective insanity. They blamed Trotskyists, bullying, naivety and stupidity. “There are always going to be 500,000 people in the country who are off-the-page nuts,” one Labour MP told Tim Shipman in his book All Out War. “The problem we’ve got is that they have all joined the Labour party because of Jeremy Corbyn.”

When it became clear that Corbyn could be elected leader his opponents suggested cancelling the election altogether. After his landslide victory they vowed to unseat him. When they tried, he was re-elected with an even bigger landslide. Last week, the entire pro-Corbyn slate was elected to the national executive committee in the midst of the antisemitism scandal.

Apparently unable to grasp that the financial crash and the austerity that followed unleashed a fundamental realignment of our politics, his opponents sought not engagement with the present but comfort from the past and then proceeded to blame the electorate (Labour party members) for its poor choices.

This is my fear for a second referendum or impeachment. These initiatives can only work if they are part of a broader vision for a more hopeful future, rather than a narrowly tailored litigation of a past mistake. Neither Brexit nor Trump created the divisions, desperation, anomie and anxiety we are witnessing – they are products of them and have deepened them. For we are not where we were – and many, including me, don’t want to go back there.