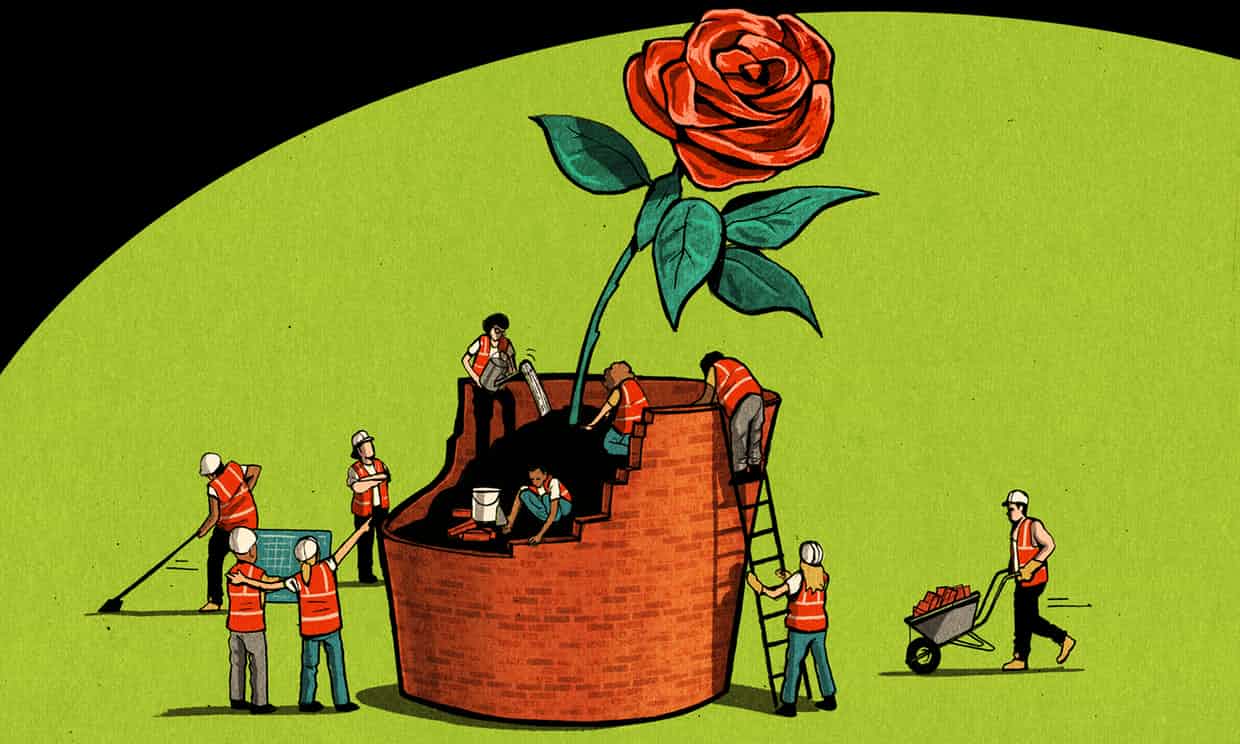 This is not a Corbynite coup, it’s a mandate for his radical agenda
The Guardian,
Illustration: Ben Jennings

“Kings were put to death long before 21 January 1793,” wrote Albert Camus, referring to Louis XVI’s execution after the French revolution. “But regicides of earlier times and their followers were interested in attacking the person, not the principle, of the king. They wanted another king, and that was all.”

One of the biggest mistakes the critics of Jeremy Corbyn, the Labour leader, made from the outset – and there are many to choose from – was that his victory was about him. They refer to “Corbynites” and “Corbynistas” as though there were some undying and uncritical devotion to a man and his singular philosophy, rather than broad support for an agenda and a trajectory. If they could get rid of the king, went the logic, they would reinherit the kingdom. With a new leader normal service could resume. Labour could resuscitate its programme of milquetoast managerialism, whereby it was indifferent to its members, ambivalent about austerity at home, and hawkish about wars abroad.

This week’s resounding victory of a slate of leftwing candidates to Labour’s national executive committee, the party’s ruling body, has put that assumption to rest for the moment. There is now a reliable majority on the NEC who back both democratising the party, to give members more control, and pursuing policies against austerity and war and for wealth redistribution.

Corbyn has been accused of tightening his grip on the party so that he may purge critics and promote cronies. The logic is perverse

That this should have happened in the week of Carillion’s collapse has a certain symmetry. Carillion took billions in public funds for public projects, paid its executives and shareholders handsomely, and has now left taxpayers to pick up the pieces in a system of private finance initiatives introduced by Conservatives but championed and vastly expanded by New Labour.

It was anger at this kind of rank unfairness, the inequalities it both illustrated and imposed after the economic crash, that explains not just Corbyn’s victory but the rise of the hard left across Europe and in the US.

The contradictions inherent in Corbyn’s rise are finally ironing themselves out. In 2015 he won not the leadership but the title of leader. Unlike Podemos in Spain or Syriza in Greece, his ascent was not the product of a movement that could sustain his challenge from the margins; instead he emerged from a wider, inchoate sense of frustration and alienation that propelled him to the top within the mainstream. Without the consent of MPs he lacked the authority that would endow that title with power and meaning in parliament. Outside parliament he lacked the kind of organised support that could buttress his position against this hostility. This left him embattled, isolated and, to some extent, ineffective, since his primary task was not to exercise leadership but to cling on to it.

Last year’s general election changed all that. Labour’s gains, with its highest vote-share since 2001 leaving the Tories without a majority, proved that there was a broad electoral constituency for his redistributive, anti-austerity agenda. In so doing it showed that the membership was far more in touch with the needs and aspirations of the electorate than the parliamentarians.

Now, with the shadow cabinet no longer in open revolt, the parliamentary party quiescent, if not onside, and the party machine no longer obstructive, at almost every tier the party has either come around or made its peace with him. Meanwhile, outside parliament, Momentum – the leftwing caucus within the party that supports Corbyn’s agenda – has become more organised and less fractious, providing a more coherent plank of support beyond Westminster. Finally, Corbyn can do what he was elected to do – lead on the agenda he has laid out. 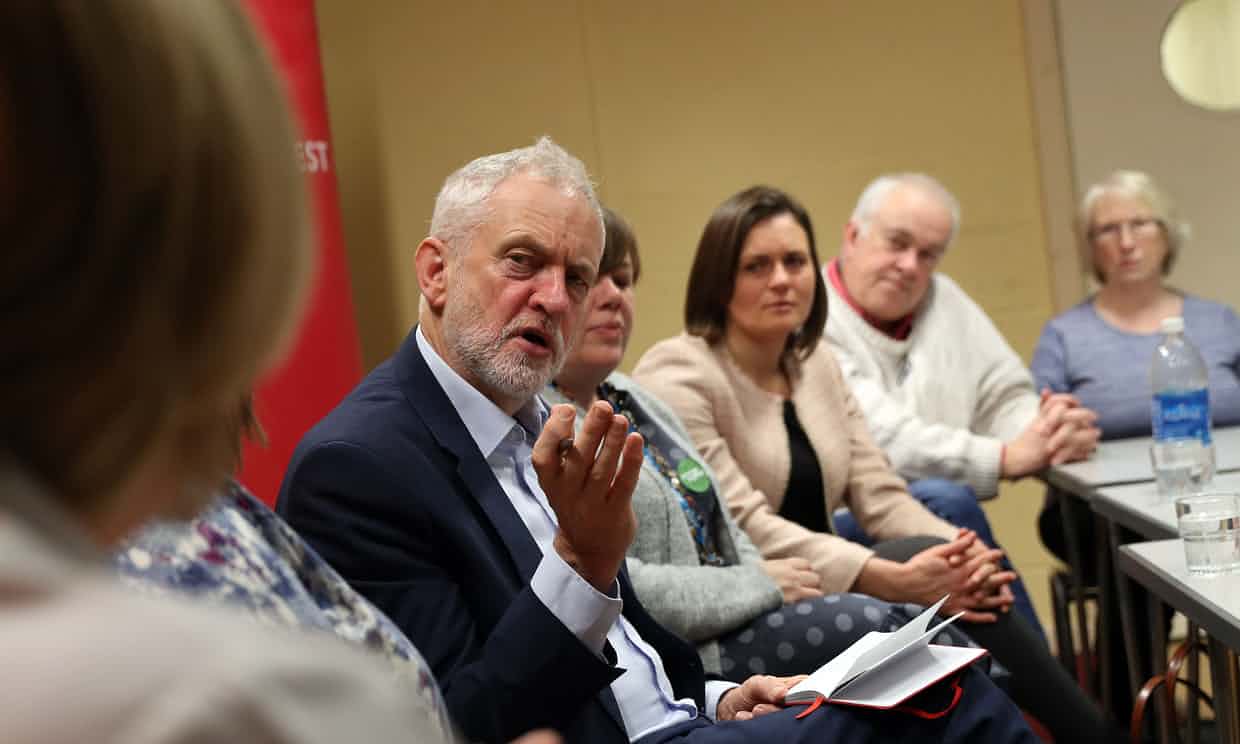 Leftwing control of the NEC was one of the last pieces to fall into place. Since the three candidates who won this week were backed by Momentum, and one – Jon Lansman – is its founder, this latest shift will inevitably provoke some bedwetting.

Those who have got everything wrong about Labour over the past two years will, of course, get this wrong too. We must once again brace ourselves for rhetorical hyperbole. Corbyn has been accused of tightening his grip on the party so that he may purge critics and promote cronies. The logic is perverse. The Stalinists, in the minds of his most feverish critics, are the ones who keep winning internal elections hands down; the democrats are those who launched a coup against the popular choice.

The obsession, among parliamentarians and their courtiers, is that this latest development will lead to a wave of deselections (or purges) in which MPs hostile to this new orientation will be forced out. There is some irony in the notion that those who tried to depose an elected leader with a huge mandate might bristle at the prospect of being removed by an election.

For now, that fear seems unfounded. While Momentum certainly believes MPs should be more accountable to their local parties, there is little evidence that this is a strategic priority (which doesn’t mean some local chapters might not pursue it). Corbyn’s team is not keen either, believing the pain rarely justifies the gain.

This is a relief. Another election could be upon us at any moment. The party does not need more trauma. Moreover, the gains are likely to be minimal. Corbyn is not king; his word is not law. The moment has tipped in his favour, not swung to him completely. And while the party may have made its peace with him, Momentum still sits outside its comfort zone. According to the website Labourlist, of the 24 key marginals to be contested so far, Momentum candidates have won in just five, while a further six have gone to candidates from the “wider Labour left”. The rest have been taken by “trade unionists, longstanding local campaigners and former [candidates]”.

Momentum’s focus is instead on funding organisers to transform the party into a social movement by connecting it with local campaigns – be they over caretakers’ pay, or cuts to schools and hospitals. For those whose understanding of politics and power is limited to elections and parliament, this will seem at best a waste of time. But anything that engages members, be they new or longstanding, in activities that make Labour more dynamic and receptive to the outside world should be welcomed.

This would fulfil one of three central challenges for Momentum in the foreseeable future. The second is to deploy all its resources – digital, human, organisational – to help Labour win at the next election. The third is to establish some independence from the Labour leadership, so that it can continue to advocate for a left agenda, should the party come to power. However confused the left might be about where power resides, the right understands that a range of vested interests, from big business to hot money, can force parliament’s hand and thwart the popular will.