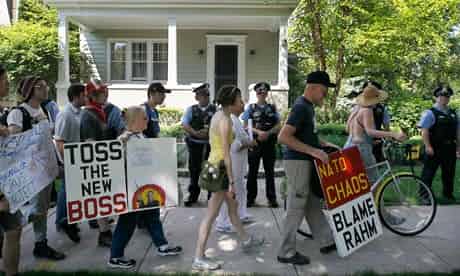 Three Nato protesters arrested in a late night raid on Wednesday have each been held on a $1.5m bond over alleged terrorism-related offences.

Police claim the charges of conspiracy to commit terrorism, providing material support for terrorism and possession of an explosive or incendiary device, are the result of a month-long investigation into a group they believe was making Molotov cocktails.

In court on Saturday, prosecutors said the trio had planned to attack targets including President Barack Obama's campaign HQ and Chicago mayor Rahm Emanuel's home in a plot coinciding with the Nato summit being staged in the city.

But defence attorneys countered that the petrol bombs had been brought by undercover officers, and that their clients were victims of a police entrapment.

It is believed that the three defendants came to Chicago late last month to take part in May Day protests.

They had already been pulled over by police last week and asked about their protest plans in a stop they posted on YouTube.

Attorneys representing the men say the charges are fabricated and aimed at intimidating activists. "We cannot say enough that we believe that these charges are absolutely … very trumped up charges," said Sarah Gelsomino of the Peoples Law Office. "Clearly in an attempt to continue this intimidation campaign on activists. Charging these people who are here to peacefully protest against Nato for terrorism, when in reality the police have been terrorising activists in Chicago, is absolutely outrageous.

"All three of these guys, interestingly, were in the car about a week ago that was stopped and harassed by the Chicago police department," Gelsomino said. "They then posted that video online in an attempt to expose that police misconduct. Each of those three are now being charged with these crimes. That's as much as we know."

They were arrested in the Bridgeport area of the City after 11pm on Wednesday. Chicago police dressed in black and armed with battering rams broke down doors in an apartment building, searched the units and then arrested nine protesters for allegedly making or possessing Molotov cocktails. Lawyers say it was just beer-making equipment.

"The city has so far failed to produce any evidence or the search warrant affidavit used in the raid," said Kris Hermes of the National Lawyers Guild.

When police detained the people, they also seized parts of a beer-making kit, including bottles and caps, and a cellphone, Gelsomino said.

"This is the playbook," said Gelsomino. "Shoddy police work. It's a fear campaign."

Six were released on Friday. One said he had been handcuffed for 18 hours in an "interrogation room". Others say they were never told why they were held. Police did not inform the lawyers of their whereabouts for 17 hours.

One of the released, who blogs under the name "TarheelDem", called on activists to flood Chicago mayor Rahm Emmanuel's official voicemail. "The whole charge is transparently bogus and meant for the media to reduce turnout to the march on Sunday."

William Vassilakis, who leases the apartment, said he was appalled by the raids.

"I could not be more disgusted, enraged, terrified, by and generally totally disappointed with the city of Chicago," he told the local ABC TV channel.