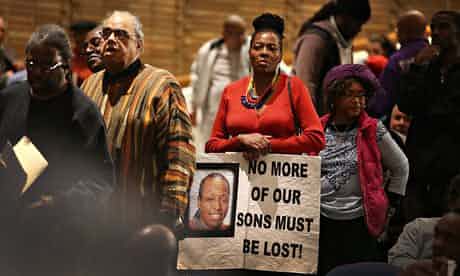 Tighter gun control won't stop the violence on its own
The Guardian,
Photograph: Scott Olson/Getty Images

On a huge banner straddling an entire block of downtown Indianapolis the National Rifle Association convention promised "Nine Acres of Guns and Gear". It didn't disappoint. In a cavernous exhibition hall showcasing the industry's finest killing machines, scores of white men (few other demographics were present) aimed empty barrels into the middle distance and pondered their purchases. All the big names were there: Mossberg ("Built rugged. Proudly American"); Smith & Wesson ("Advanced by design"); and Henry ("Made in America. Or not made at all").

Elsewhere at the convention attendees were sold the fear that makes the gear so desirable. In the Home Defence Concepts seminar several hundred were told to visualise the room in their house where they would barricade themselves in case of burglary, and to "recreate that emotional component" of the terror of a break-in with a dry-run with the whole family. In Refuse to Be a Victim, a packed room sat for a three-hour session on how to identify and repel predators.

The NRA president, Wayne LaPierre, made sure nobody left unaware of the challenges. "There are terrorists and home invaders and drug cartels and carjackers and knockout gamers and rapers, haters, campus killers, airport killers, shopping mall killers, road-rage killers," he said. "And killers who scheme to destroy our country with massive storms of violence against our power grids, or vicious waves of chemicals or disease that could collapse the society that sustains us all."

Three hours' drive away in Chicago a society that has been sustaining too few for too long was collapsing dramatically. Four people died and 35 were injured in shootings over the weekend of the NRA conference. Among them was Leonore Draper, a community activist who was shot while returning home from a fundraiser for an anti-violence campaign. The previous weekend nine were shot dead and 44 injured, after which a special federal unit was bought in to the city to help combat drugs and gangs.

There is a clear link between the rhetoric of Indianapolis and the reality of Chicago. The one thing everyone agrees on is that were it not for the gun lobby there would be fewer guns and more oversight over who owns them. With more guns and less oversight comes the likelihood of more gun violence. With more violence comes more fear. With more fear comes the demand for more guns.

And so it is that the very dystopia the NRA insists it's resisting is the one it's actively creating. Its response to gun violence is to call for people to be armed so they can shoot criminals who might not have guns if the NRA didn't stonewall basic gun control efforts. Like the apocryphal teenager who murders his parents and then asks for the court's mercy because he's an orphan, the NRA's "solutions" stem from a problem for which it is largely responsible.

As often as not the gun lobby gets its way. After Adam Lanza, who was mentally ill, entered Sandy Hook school in Newtown and shot 20 small children and eight adults, including his mother and himself, support for gun control intensified nationwide. But a few months later the town's school board voted unanimously to have an armed guard in every elementary school.

So long as the debate about gun violence limits itself to gun ownership alone it risks being suspended in this morbid circular logic with broad appeal and limited plausibility. Chicago, gun lobbyists point out, has some of the strictest gun legislation in the country. What they don't say is that between 2008 and 2012 almost one in five guns recovered in crimes within a year of purchase were bought at one gun shop just out of the city limits. Polls consistently show that Americans favour universal background checks for gun sales. Research shows that states with stricter gun controls have fewer gun-related deaths.

So gun control laws are important and have an effect. That's why the NRA is so viciously opposed to them. Just last week it managed to delay a White House plan to close a loophole allowing people to buy weapons like machine guns, grenades and sawn-off shotguns without undergoing background checks. But by themselves they provide a significant but entirely insufficient frame through which to understand and remedy gun violence. In a nation with rampant inequality, endemic segregation and massive poverty guns are the spark on a huge pile of dry tinder.

Take the area where Draper lived and died. According to the census it is 95% black, with more than half living below the national median household income and almost half paying more than 30% of their incomes on their mortgages. People are educated – one in five has a bachelor's degree – but there are precious few jobs. This excuses nothing but helps explain a great deal.

The poverty and inequality foster desperation. The mortality rate for black infants in the city is on a par with the West Bank; more than 75% of all black children in the Chicago city area live in neighbourhoods where 90% are classed as living in poverty. The city's South Side used to boast huge steel mills and manufacturing plants. Nowadays, in some areas, the drugs trade is the only trade available, particularly for young men emerging from underfunded schools. As Yvonne Sobers, a Jamaican human rights activist, once told me: "In a community without a safety net the gun represents the safety net. The gun is power, money and manhood."

Meanwhile, segregation is a serious barrier to empathy. White people and wealthy people don't come to neighbourhoods like this. They read about them on the news. They expect people to get shot there. Things happen there as though in another country, which, given the poverty, they might as well be. "If you're a reader of the New York Times then a child who is shot by a stray bullet during a gang shooting is not easy for you to imagine," says Slate's senior editor, Dan Kois, explaining why the tragedy of Sandy Hook managed to galvanise so many people. "Sandy Hook was easy for people to imagine. It allowed middle-class white people to put themselves and their children in that school in a way that other tragedies do not."