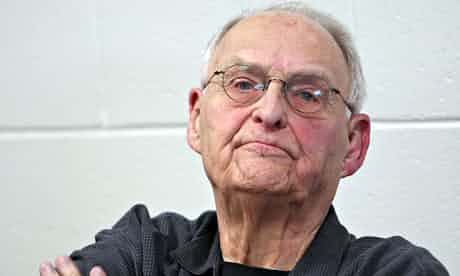 Let's hear it for Robert Copeland. The police commissioner of Wolfeboro, New Hampshire (population 6,083) sticks to his principles. Even if those principles are stuck in a previous century and mired in bigotry. In March Jane O'Toole was finishing her dinner at a bistro in town when she heard Copeland, 82, announce loudly that he hated watching television because every time he turned on the TV he kept seeing "that fucking nigger". The "nigger" in question was the president of the United States.

O'Toole had no idea who Copeland was at the time. But when she found out, she wrote to the town manager to complain. Copeland was unrepentant. "I believe I did use the 'N-word' in reference to the current occupant of the Whitehouse," he wrote in an email to his fellow police commissioners. "For this, I do not apologise – he meets and exceeds my criteria for such."

Such candour is rare nowadays, even if the furore is not. Over the last few weeks incidents like this have become tiresomely regular. First came Cliven Bundy, the Nevada rancher in a standoff with the government over refusing to pay his grazing taxes. His elevation as a Conservative folk hero stalled after he opined on whether the "Negro" shouldn't be back in chains. "I've often wondered, are they better off as slaves, picking cotton and having a family life and doing things, or are they better off under government subsidy? They didn't get no more freedom. They got less freedom."

Just a couple of days later a tape emerged of Donald Sterling, the manager of the LA Clippers basketball team, asking his girlfriend not to take pictures with black friends or bring them to games. "Admire him, bring him here, feed him, fuck him," he said of former basketball legend, Magic Johnson. "But don't put him on an Instagram for the world to have to see so they have to call me."

A week later British TV host Jeremy Clarkson was caught on camera reciting a version of "eeny, meeny, miny, moe" from his childhood ("before racism was bad" as The Office's David Brent once put it) in which he continues muttering "catch a nigger by the toe".

By the time Copeland's outburst became a matter of national note a week later, the pattern had been set: old white men with mouths writing cheques their status won't cash, in currencies that went out of date decades ago. So far so bad. None are worthy of sympathy.

And yet the magnitude of the response to each incident exemplifies how high the bar is now set for challenging racist behaviour and how distorted our understanding has become of what that behaviour constitutes.

Before there can be outrage, the offending party must be caught red-handed – preferably on tape – using the worst epithets and most egregious insults. Clarkson previously maligning Mexicans as "lazy, feckless and flatulent", or making jokes about "black Muslim lesbians", or Sterling twice being fined by the department of justice for being a racist slumlord, didn't quite cut it.

And so the perception – on both sides of the Atlantic – takes hold that racism is not a system of discrimination planted by history, nourished by politics and nurtured by economics, in which some groups face endemic disadvantage – it's about ignorant old people getting caught saying mean things. By privileging these episodes – outrageous as they are – racism is basically reduced to the level of a private, individual indiscretion made public. The scandal becomes not that racism exists but that anyone would be crass enough to articulate it so brazenly.

The reality of modern racism is almost exactly the opposite: it's the institutional marginalisation of groups performed with the utmost discretion and minimum of fuss by well-mannered and often well-intentioned people working in deeply flawed systems. According to a recent US department of education report, black preschoolers (mostly four-year-olds) are four times more likely to be suspended more than once than their white classmates. According to a 2013 report by Release, a UK group focusing on drugs and drug laws, black people in England and Wales are far less likely to use drugs than white people but six times more likely to be stopped and searched for possession of them. In both countries black people are far more likely to be convicted, and to get stiffer sentences and longer jail time.

This is the soporific, statistical drumbeat to which black children march through our institutions and to which society as a whole has become inured. You are unlikely to find many of these preschool teachers throwing around the N-word or judges reminiscing about slavery. Apparently, until you do, there will be no big story here. It's just the way we do things. The problem is no longer that it's brazen, but that it's banal.

This is what makes attempts to defend a party like the United Kingdom Independence party from accusations of racism so hollow. Of course, that is not the sole nature of its appeal. But its calls for social housing to go first to those whose "parents and grandparents were born locally"; and a recent poll revealed that more than half its supporters believe immigrants and their British-born children should be "encouraged to leave the country".

These are unsophisticated codes for the kind of policies that will entrench inequalities, starting at the border and extending from the classroom to the courtroom. Racism is central to Ukip's meaning, even when it is not explicitly included in its message. Last Friday its leader, Nigel Farage, said: "Any normal and fair-minded person would have a perfect right to be concerned if a group of Romanian people suddenly moved in next door."

It seems only when he is personally caught, on camera, repeating that Smethwick slogan from 1964 – "If you want a nigger for a neighbour vote Labour" – will the doubters be convinced.

Politically, at least, this was always the point. Racism is a hardy virus that mutates to adapt to the body politic in which it is embedded. You can't wipe it out with a single shot because by the time you've dealt with the last strain, a new one has developed resistant to previous remedies. "You have to face the fact that the whole problem is really the blacks," President Richard Nixon once explained to his chief of staff. "The key is to devise a system that recognises that while not appearing to." That system is in place, even if some are more skilled at keeping up appearances than others.