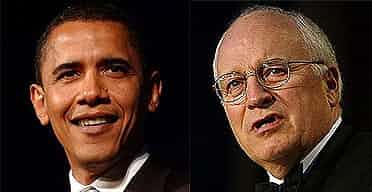 We all have one drop
The Guardian,
Photographs: Jessica Hill/Lawrence Jackson/AP

It wasn't difficult to see what Matthews was driving at. Obama is the product of a mixed race relationship who went to Harvard and taught at a prestigious law school. He is, as Joe Biden would later tell us "clean" and "articulate". In short, he is not Jesse Jackson or, God forbid, Al Sharpton. He doesn't scare white people. Or at least not that much and not that many.

But Matthews' statement was far more revealing about how race is understood in the US than how Obama has been. For while it is true that the Illinois senator's father hails from Kenya, his mother is from Kansas. So of course he has a history of Jim Crow and slavery in his family. His mother is a white American, and Obama has said that her ancestors did, in all likelihood, own slaves. Black people didn't enslave and segregate themselves.

Race, not just here but throughout the west, is generally understood as an issue for black people. White people are not even understood to have a race. There is no white history month. White candidates are never asked if they think they can take the white vote (which in the Democrats' case they have only achieved once since the second world war), or if they are authentically white.

But two things make this so particularly bizarre in this country.

First, white and black people's lives are so closely enmeshed here that to try and understand the one without the other is to misunderstand them both entirely. Second, that binary opposition of black and white gives expression to a tension that is both unresolved and potent but no longer pivotal in the way that it had once been understood.

News last week that Obama is the eighth cousin of Dick Cheney might provide one more opportunity for a respectful burial of established notions of what segregation and integration has ever been about here.

In the South, where the issue was always hottest, black women breasted and raised white children, and since most slave owners were not that wealthy, many black and white families shared the same roof. Moreover, droit de seigneur dictated that it was a white gentleman's entitlement to take his slave women by force.

The question was not whether the races could mix but what were the ground rules for them mixing. These relationships were not consensual or mutual but usually coerced and one-sided. The whites-only signs kept African Americans from many a public place; but in the most intimate parts of their lives, black and white people were as integrated as they possibly could be.

As such the fact that Strom Thurmond fathered a black daughter even as he preached segregation on the stump was both hypocritical and perfectly logical.

"The issue for black people was never integration or segregation but white supremacy," says Charles Payne, the Frank P. Hixon Professor in the School of Social Service Administration at the University of Chicago.

"The paradigm of integration and segregation was a white concern. That was how they posed the issue of civil rights given their own interests, and that was how the entire issue then became understood. But the central concerns of black people were not whether they should integrate with white people or not, but how to challenge white people's hold on the power structure."

Revelations earlier this year that Sharpton is descended from slaves owned by Thurmond's family only further makes the point. In the words of Barbara J. Fields, race explains nothing; it is itself something that needs to be explained.

And as time goes on it increasingly has to refine our explanations. African Americans are no longer the dominant minority and the debate about Obama's authenticity has shown how sharp the fissures between race and ethnicity can be.

Down in Louisiana, home to the nooses of Jena and levees of New Orleans, they have just elected an Indian-American, Bobby Jindal, as governor. With little viable competition in a state he has effectively been running in since he narrowly lost four years ago, Jindal did well everywhere. But he did best in those areas where ex-Klansman David Duke did so well 16 years ago. His victory is already being touted as "yet more evidence that neither race nor ethnicity is any bar to achievement in the US - not least by Jindal himself.

But the reality of his story is more American than any Horatio Alger dream. A tale of personal reinvention and opportunism in search of opportunity. Aged four, Priyush Jindal swapped his name for Bobby, after a character in the Brady Bunch. 14 years later he swapped Hinduism for Catholicism. When he ran four years ago he was the last candidate to launch advertising on television and generally referred to himself only as Bobby.

In Louisiana, of all places, you will find many African Americans of lighter complexion than Jindal who never had to change their name or their religion in order to assimilate. But you won't find any of them running as a Republican, let alone winning the white vote.

Four years ago I asked Harvey Thompson, a black Louisiana Republican, as we watched Jindal deliver a press conference on the steps of Charity hospital, whether Jindal could have got that far if he were African American.

Whatever integraton is about it's not about mixing; whatever else race is about, it's not about colour. And what Matthews referred to as "the bad stuff in our history" is everywhere. Just like the good stuff.