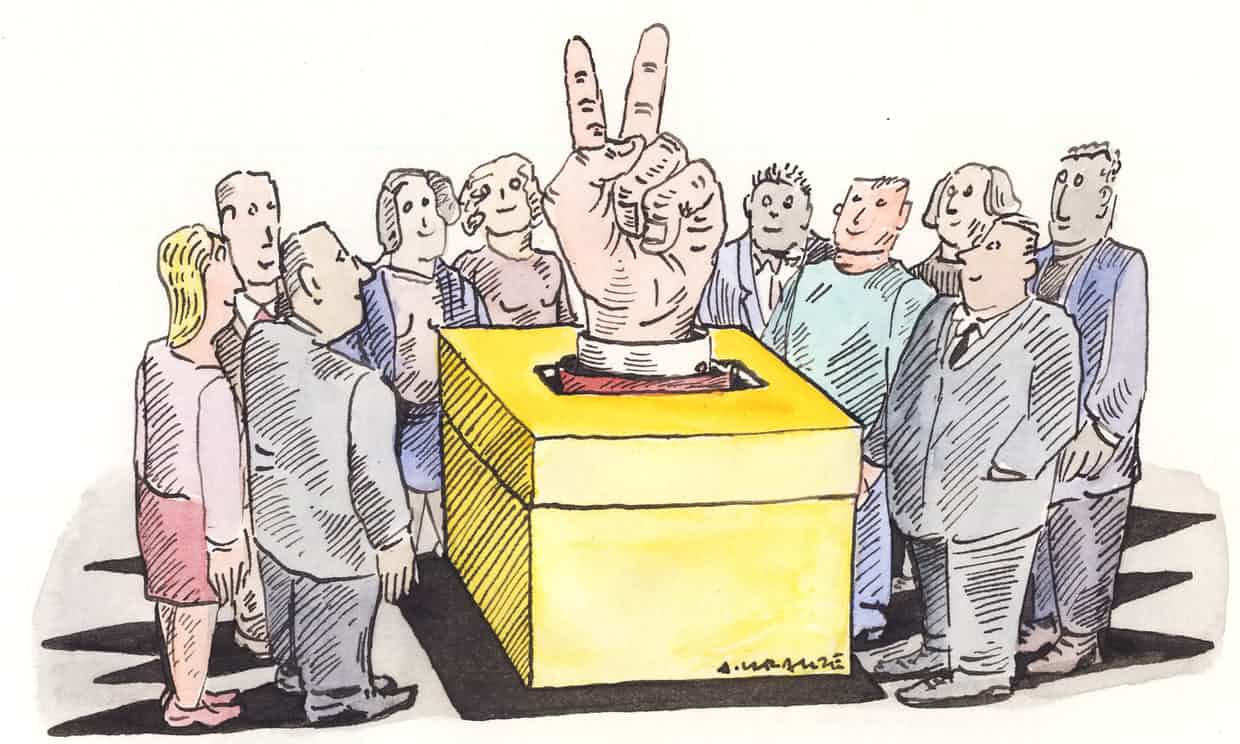 We were told Corbyn was ‘unelectable’. Then came the surge
The Guardian,
Illustration by Andrzej Krauze

At a drinks party in central London, not long after Jeremy Corbyn had been elected leader of the Labour party first time round, a young journalist talked me through the facts as she saw them.

“I think you’ll find he just won an election,” I told her.

“I mean 2020,” she said, referring to what we all assumed would be the next general election. “Are we talking about 2020 in the past tense now?” I asked.

The trouble with received wisdom is that it rarely comes with a receipt. With the provenance of the “wisdom” unacknowledged, the recipient passed it on as though it were the self-evident expression of their own genius: an inarguable fact plucked from a clear blue sky.

For the past two years, it has been received wisdom that, when put before the national electorate, the Labour party under Corbyn was unelectable. Not simply that it would lose, but that there was no plausible way it could compete. These were not presented as opinions but as facts. Those who questioned them were treated like climate change deniers. Those who held the wisdom were the scientists. To take Labour’s prospects seriously under Corbyn was to abandon being taken seriously yourself.

The situation is volatile. According to one poll, one in five voters could still change their mind

The political class imparted as much to the media class, and the media class duly printed and broadcast it. The political class, drawn for the most part from the same social class as their media counterparts, then took those articles and bulletins and presented them as evidence. The wisdom was distributed to all who mattered. Those who did not receive it did not, by definition, matter. Within this fetid ecosystem the air was too stale for new ideas to grow.

With days to go, Labour now sits between one and 12 points behind the Tories in the polls. One projection has the Tories failing to gain an overall majority; most predict they will get a majority of between 30 and 70. None have Labour winning. Most have Corbyn getting a larger share of votes than Ed Miliband or Gordon Brown. The polls have been wrong before. 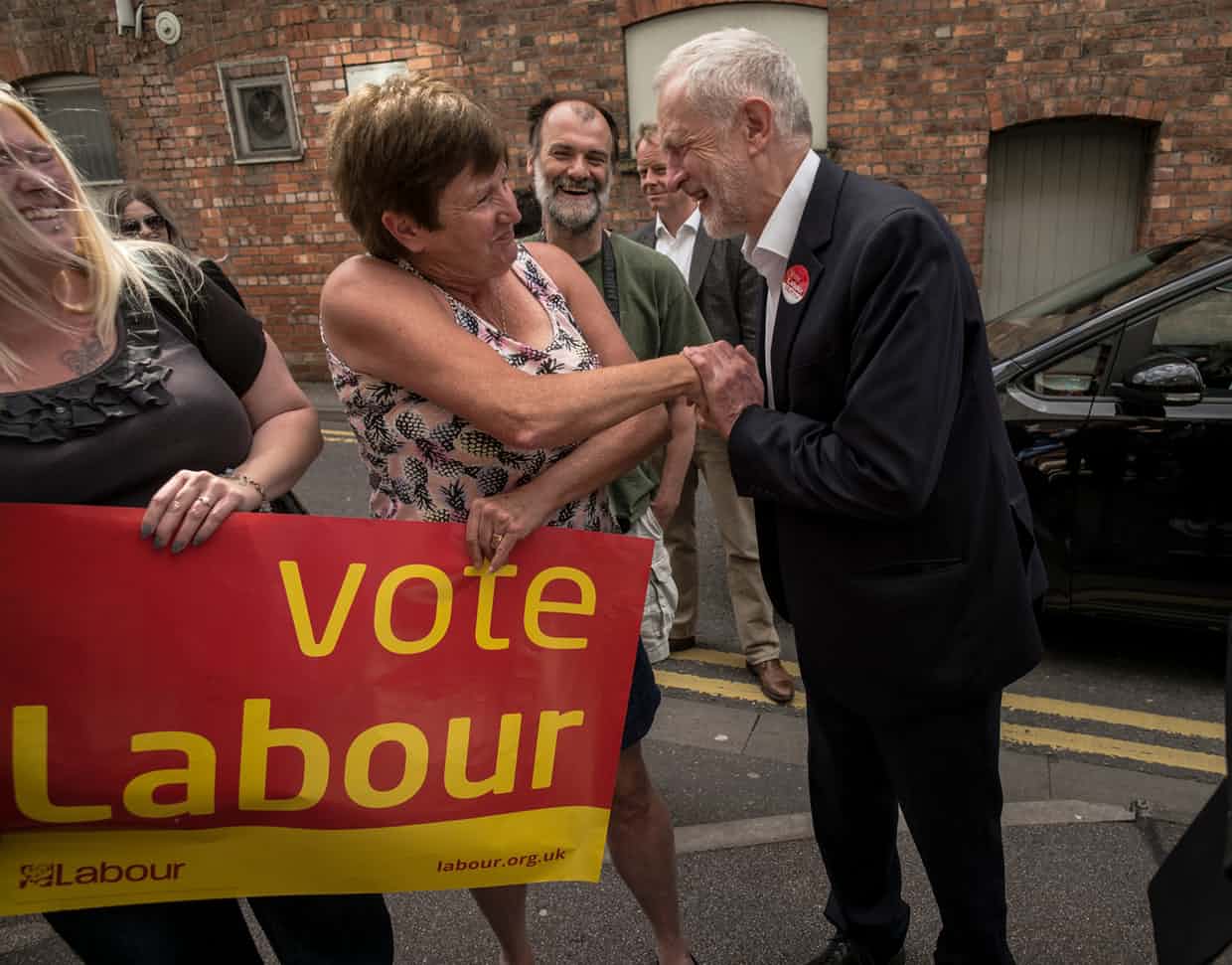 ‘The economic crash and austerity caused a tectonic shift in our political culture. But the received wisdom about electability did not.’ Photograph: Sean Smith for the Guardian

The situation is volatile. According to one poll, one in five voters could still change their mind. We won’t know whether Labour will be elected or not until Thursday night. To those who have insisted on its unelectability, the matter of people actually going to the polls was always a formality. Now it seems, from reporting and the polls, that even if Labour doesn’t win under Corbyn, it is a viable electoral force.

Received wisdom aside, this should not surprise us too much. Electability, whether it relates to a person or a programme, is not a science. There are, it is true, gifted people out there who have studied elections and traced voting patterns to make predictions and projections. They are pollsters and psephologists; they are not clairvoyants.

Nor is it a neutral category. The people who “decide” whether someone is electable or not are not the electorate – that comes much later – but opinion-forming elites and those who fund and promote them. They apply themselves to the task with great prejudice and select both people and programmes in their own image and interests.

In America, money selects the candidates before the voters get a look-in. In Britain, the media are the key arbiters. “The ideas of the ruling class,” Karl Marx pointed out, “are in every epoch the ruling ideas.” That’s how a man who talked with Sinn Féin (a strategy that stood the test of time) can be constantly interrogated about his support for “terrorism” while a woman who joined a party that branded Nelson Mandela a terrorist is never asked about her support for Apartheid.

Nor are the attributes that comprise electability fixed. Political cultures are living organisms. They change, evolve and develop – the qualities voters look for in politicians change. That’s true for candidates. In America, it was once commonly understood that you had to be white to be elected president. In 1958, when asked if they would vote for a black candidate, 53% of white voters said they would not; in 1984, it was 16%; by 2003, it was just 6%. We know now that’s no longer true. But until election night in 2008 we couldn’t be certain.

It’s also true for their agendas. Even as parties anchor themselves to basic principles, they have to adapt their promises to the times they are in. Blairites and Clintonites did not only once understand this, it was their credo. But having crafted a neoliberal agenda that made their parties electable in the 90s and beyond, they apparently believed their work was done: that the shift to the right was both unidirectional – you could never shift left – and unique – they would never have to shift again.

The economic crash and the austerity that followed caused a tectonic shift in our political culture; what people wanted from a centre-left party changed. But the received wisdom about electability did not. Its high priests kept insisting elections are won in the centre, without any apparent understanding that the centre can move and, in times of extreme polarisation, disappear. The pragmatists turned dogmatic; the modernisers became conservative.

But the principal problem with the notion of electability is that it is promoted on the premise that what has not been tried cannot possibly succeed. It suggests the way people see the world at any given moment cannot be changed through argument and activism and instead erects borders for what is permissible discussion and polices them determinedly. Those who dream outside those borders are utopian; those who speak outside them are fools.

The trouble is that in times of crisis, like this, the cost of thinking outside those borders becomes lower for many than the price of living within them. While received wisdom comes with no receipt, it’s always the same people who pick up the tab. A candidate who has connected domestic terrorism and foreign wars and argued for the redistribution of wealth to shore up public services has been surging. This, we were told, was not possible. It’s why, for the first time in a long time, a significant number of people are excited about an election.

We don’t know if his party will win. We will find that out on Thursday. The only way to truly know if something is electable is to fight for it and vote for it.

follow on twitter
RT @MCRSociology: Gary Younge discusses identity politics and America with Will Hutton in this episode of @thewesocietypod https://t.co/72…
RT @mart_welton: Congratulations to all those getting their A-level results today. If you have BBB at A-level or above you can still apply…
RT @BernardineEvari: Please follow the groundbreaking online #MuseumofColour UK, founded by the unstoppable Samenua Sesher. The 1st gallery…
RT @EthnicityUK: Gary Younge is interviewed by @sonikkalogan about his work on racism and gun violence in @the_hindu #DataPoint podcast. h…
RT @thefreedomi: 🚨 NEW: Saudi women’s rights activist & academic Salma al-Shehab was sentenced to 34 years in prison + 34 year travel ban f…
RT @LRB: #DawnFosterForever! On Thursday 15 September at the @LRBbookshop, @BizK1, @piercepenniless, Lynsey Hanley and @garyyounge will d…
RT @ShowunmiV: This is how we support Black women and girls https://t.co/8YmgV21zHo
RT @sonikkalogan: It's #DataPoint Pod Thursday! In this week's episode, I talk to @noraneus, @garyyounge and @Casey_J_Wooten about the U.S.…
RT @bgnoiseuk: Next month, @LRBbookshop will host an event to celebrate the life and work of Dawn Foster with @BizK1, @piercepenniless, Lyn…
Help me Twitter. The quote: ""You can cut all the flowers but you cannot keep Spring from coming." is most commonly… https://t.co/Xs7JkiOEd5
© Gary Younge. All Rights reserved, site built with tlc
Symbicort retail price Where can you get adalat Eldepryl price per pill Can i buy hytrin Order lamisil How to get norvasc without a doctor Buy generic celexa How to get aggrenox without prescription What do you need to buy temovate Can i buy prograf over the counter