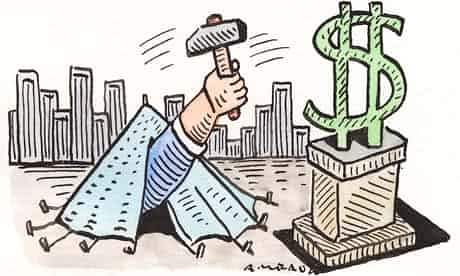 Who knows where the occupations are going – it's just great to be moving
The Guardian,
Illustration by Andrzej Krauze

On the night of 28 October, more than 100 Tennessee highway patrolmen made their way down the steps of Nashville's war memorial in single file. Above them, embossed in stone, a quote from President Woodrow Wilson: "America is privileged to spend her blood and her might for the principles that gave her birth and happiness and the peace which she has treasured." Below them, in the plaza, supporters of Occupy Nashville, who believe too much treasure is concentrated in too few hands, corrupting the principles on which their nation was founded.

Earlier in the day the state had imposed a curfew on Legislative Plaza, where the protesters had been camping. That night, after a five-minute warning, the troopers marched silently to physically remove them by their arms and legs. "It was like watching a movie in mute," says Albert Rankin, who's been at the camp since the beginning. "It was really eerie." Within days a judge had overturned the ruling and the protesters were allowed to stay unharassed.

It is fitting, given the nature of the bailouts and hundreds of thousands of repossessions triggered by this economic crisis, that resistance to it would at some stage become a battle over public space with the risk of mass evictions. In the last few weeks, as popular support for these mostly peaceful protests has grown, the struggle for the right to stage them at all has intensified. From Vancouver to Melbourne and Boston to Bournemouth, encampments have been raided or banned.

But no sooner does the state tear one down than people set one up, sometimes in unlikely places. Naperville, Illinois (population 142,000), voted the second best place to live in the US by Money Magazine just five years ago, is in occupation; so too is Seydisfjordur (population 668) on the eastern shores of Iceland. Over the weekend the Isle of Wight went into occupation.

Their ubiquity is testament to the breadth of appeal for this broadside against the political and financial elites and the converging crises in our economies and democracies for which they are responsible. The occupy model can be replicated because in one sense Wall Street is everywhere. It has insinuated itself into the lives of every pensioner, student, parent, library user, bus passenger, public employee and homeowner. It needs no translation. Every country has one. Every town and hamlet feels its influence.

For the protesters, however, this also makes it a particularly slippery adversary. Unfettered by national boundaries, unregulated by supine politicians and unaccountable to anyone, neoliberal globalisation is a force without a face and a system without a centre, offering little in the way of identifiable, resonant, physical targets. So if Wall Street is omnipresent, it is no less elusive: it's everywhere until you try to find someone responsible for the mess we are in, and then it disappears.

When I asked Rankin how long he planned to be part of Occupy Nashville, he said: "As long as it takes."

"For the corporations to stop running our government."

"You could be here quite a while," I suggested. He nodded, then shrugged.

The occupations are essentially symbolic. Their aim is not to challenge the existing order directly but to highlight its inequalities and inequities in the hope that the public will be galvanised to transform it. This comes by way of description rather than criticism. In less than two months they have achieved more than anyone could have imagined.

The Occupy movement has provided a large tent in which a range of previously atomised struggles can now camp. It's a place where those working against war and to protect environment, library services, legal aid, public healthcare, public sector jobs (to mention just a few) have been able to find one another. Every weeknight in Nashville between 100 and 150 people meet at 7pm for a general assembly which is open to the public. Laura Wallace, who works to distribute local foods from local farms, helps moderate the meetings. "I've lived here for five years and I never knew these people were out there," she says. "It's really exciting to be part of this bigger group that comes together in a common space with a common goal."

The occupations have shifted the conversation about what the problem is. Prior to its emergence the trend was not to talk truth to power but to slur the powerless. Politicians went almost unchallenged as they variously identified the troublesome 1% as Gypsies, Muslims, asylum seekers, trade union activists or public sector employees. Now we are back to talking about the people who created this crisis and the system that sustains them.

The occupiers have also provided a living example of the kind of world they would like to see. At Nashville's general assembly on Wednesday about 100 people gathered making decisions using the consensus model. This movement is, if anything, painfully democratic. It is easy to ridicule the jazz hands (waving your hands high and wiggling your fingers signals assent, holding them low means dissent and in the middle means so-so) and to mock the human microphone (where mics are banned every few phrases are repeated by those at the front for the benefit of those behind them). But the very things that make it cumbersome make it authentic. Its leadership and its base are one and the same thing. No corporate money sustains it; no cable station is dedicated to promoting it, no individual speaks for it.

Those who deride it for its lack of concrete demands simply don't understand its strategic function. There is no lack of specific suggestions out there for how to democratise our institutions and confront inequalities. What's missing are real democracies, free of corporate influence, that are capable of accommodating and enacting those demands even when they have majority support. The movement exists virtually without reference to electoral politics because the problem is not programmatic but systemic. When what is both desirable and popular is no longer achievable, politics is transformed from the art of the possible to the task of creating new possibilities.

Fortunately that task has long been joined in myriad ways by people, rooted in communities and workplaces, who have been fighting foreclosures, redundancies, service cuts and tuition hikes, who refused to accept there was no alternative. The strength of the Occupy movement at this stage resides in its ability to act as both conduit and co-ordinator for those fragmented groups: a doula for a revitalised, progressive coalition.

In few places has this been as evident as in Oakland, where after a brutal raid on its camp, occupiers called for a general strike, which shut down much of the city, including the port. A friend, who had initially been reluctant to participate, decided to down tools and join the throng.

"The sunset march to the port (estimated 10,000 participants) was the real inspiration for me as we marched through my old neighbourhood, which only recently got a decent grocery store," she wrote. "Glad to see the folks of West Oakland come out of their houses waving handmade signs in support of this movement, and honking approval as they drove past."

Hope where there was cynicism; solidarity where there had been suspicion. The occupations are more effective as a launch pad than a destination. Nobody knows where this is going. It's just great to be on the move.