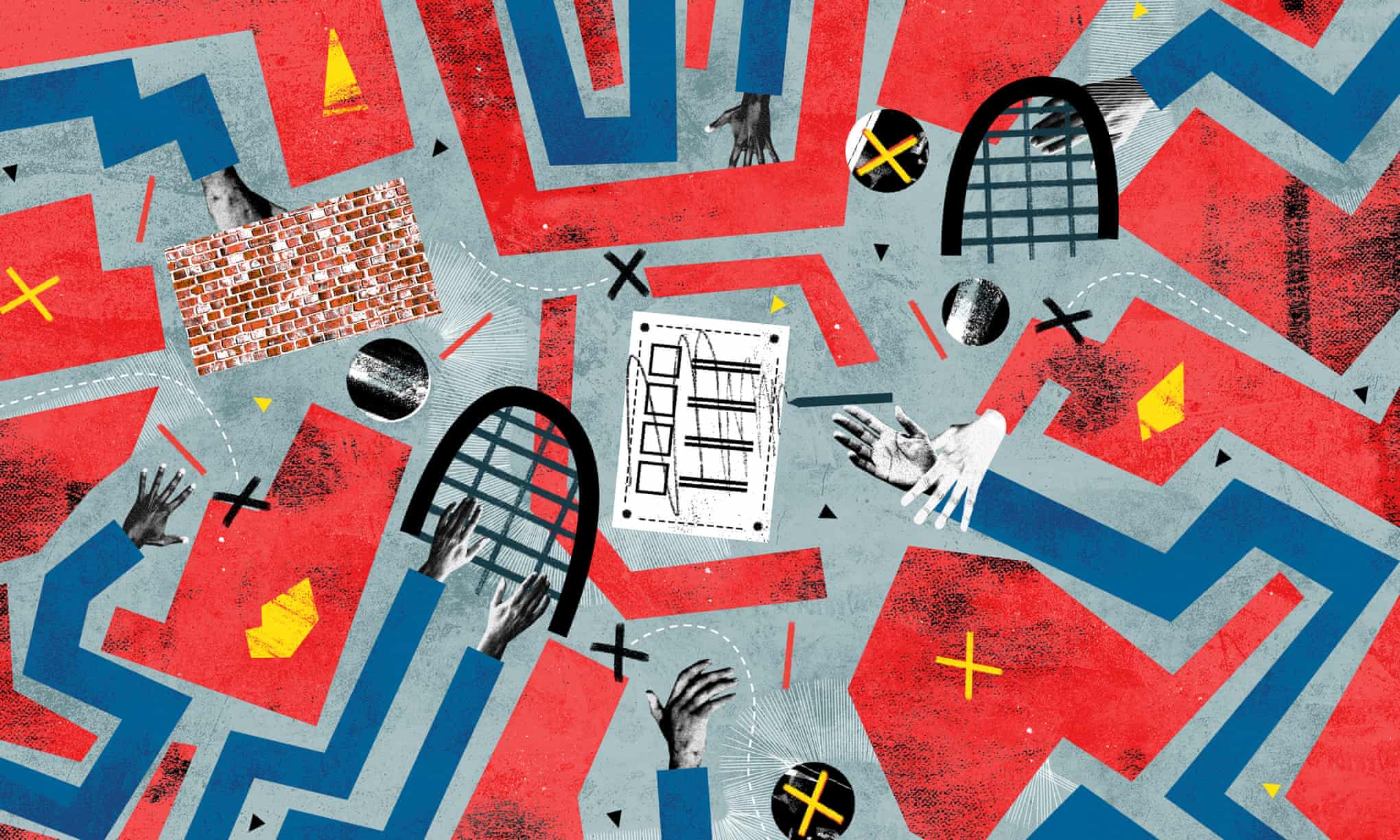 Why democracy will be the biggest loser in the US midterms
The Guardian,
Illustration by Nate Kitch

When Angelina Cruz, the head of the teachers’ union in Racine, Wisconsin, goes canvassing, she doesn’t just knock on doors. If she sees someone in the street she approaches them and starts a conversation.

“D’you know you can vote today,” she asked a young black man who walked by last Saturday.

“On papers or off papers,” she asked. (In Wisconsin your voting rights are only restored after prison, parole and probation have all been served, and you are “off papers”.)

“Most of them are on papers too,” he yelled back.

Gerrymandering is openly employed here, in effect allowing parties to choose the voters they need to keep them in power

On Tuesday there will be elections in the US for the entire lower chamber (the House of Representatives), a third of the upper chamber (the Senate) and several governors and state legislatures. The results will be consequential. But the process will not be democratic. Millions of people will be excluded, potentially hundreds of thousands of votes suppressed and many voting districts brazenly configured to favour one party or the other; not all citizens are eligible, not all those who are eligible are permitted to vote, and not all votes will carry the same weight.

When it comes to felons, Wisconsin is far from the worst offender. One in 10 voters in Florida has been disenfranchised because they are a felon, and it is one of 10 states where felons may lose the right to vote permanently.

But on other fronts Wisconsin illustrates the point all too well. Gerrymandering, where politicians draw electoral boundaries to favour their own side, is openly employed here, effectively allowing them to choose the voters they need to keep them in power. The result is a series of preordained outcomes that make seats less competitive, candidates less responsive, politicians more extreme (since to keep their seat they only have to keep their base happy) and the entire process less credible.

Both parties do this when they get the chance; Republicans have simply had more chances recently and are more shameless and therefore more effective at it. In 2012 Republicans received 46% of the popular vote in Wisconsin state elections but received 60% of the seats in the state assembly; nationwide that year Democrats got 1.4 million more votes while Republicans won 33 more seats.

Efforts to suppress the vote, by demanding identification that many eligible voters don’t have – often because they cannot afford it or do not know how to get it – has also eroded confidence in the process. Voter ID laws are ostensibly aimed at countering voter fraud; the trouble is voter fraud barely exists. In the 2016 election there were four documented cases of impersonation, while a 2017 academic study put the upper limit for incidents of double voting at 0.02%.

But while the fraud is illusory the disproportionate number of disenfranchised black and poor voters is not. In Georgia 53,000 voter applications, most from African Americans, are currently being held up by the secretary of state, Brian Kemp, some for such petty reasons as a missing hyphen. Kemp is running for governor in a tight race against a black opponent. In a recently leaked video recording he expresses concern at his chances, “especially if everybody uses and exercises their right to vote”. Nicala Aiello, a poll worker in Racine, says she saw about 11 people turned away from the polling station she works at in 2016, the first election in which a new, more stringent voter-ID law was in place.

The voter ID requirements often demand money some people don’t have and are more onerous for the young and the poor who move a lot or may not have a driving licence. Last month the supreme court upheld a North Dakota law that demanded ID with a “current residential street address”. This is burdensome for Native Americans living on reservations who use post-office boxes to get their mail, and where street names and numbers are either nonexistent or inconsistent.

And as the electorate continues to get more diverse these efforts to stop some people voting will only get more perverse.

The stakes are high. Four of the states with the highest proportion of felons removed from the voter rolls – Florida, Georgia, Nevada and Arizona – all have very close state-wide races this year. The current North Dakota senator is in a tight race that she won by just 3,000 votes in 2012.

Meanwhile, Aiello believes if what she saw in Racine were replicated across Wisconson, it could have significantly affected the result there. Neil Albrecht, the most senior election official in Milwaukee, the state’s largest city, agrees. “It is very probable enough people were prevented from voting to have changed the outcome of the presidential election in Wisconsin,” he told the Mother Jones website last year.

Gerrymandering and voter suppression could be reversed quite straightforwardly. But some of this unfairness is baked into the polity. In the Senate each state has two seats; even though California has 68 times the population of Wyoming, they each get the same representation in the upper house. Moreover the presidency does not go to whoever wins the most votes, but whoever wins in the “electoral college” – a body also weighted towards less populous states.

As a result Republicans have only won the popular vote for the presidency once since 1988. In a more consensual political culture this would matter less. But when politics is so polarised, the fact that a president who was not favoured by most Americans is ramming through a deeply divisive agenda helps explains why so much opposition has spilled out on to the streets. No country’s electoral system is perfect. But America’s political class has wilfully decided to make the inherent flaws in its system worse, while adding new ones.

The broken politics that have resulted are not just the product of a profound ideological fissure but a profoundly unfair and broken process that is particularly rigged against those who are poor and dark. Whoever wins on Tuesday, democracy will have already lost.