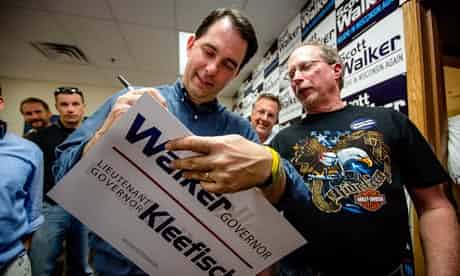 In a sermon, which would later serve as a title for Barack Obama's bestselling book, his former pastor, Jeremiah Wright, described a painting called Hope by GF Watts. It depicted a bruised and battered woman who used the single string she had on her harp to make holy music. "To take the one string you have left and to have the audacity to hope," said Wright.

When organized labour mounted the challenge to recall Wisconsin's Republican governor, Scott Walker, they were certainly audacious. There have only been two recalls in the history of the country and the national Democratic party did not want them to do it and made clear they would provide little in the way of support for it. They knew Scott Walker would be well-funded and have national backing. They did it anyway. And they lost.

There is no masking the fact that their defeat is a bitter blow. Before the recall they could claim that Walker ran on false pretences and people did not know what they were getting. Now he has a record and the people of Wisconsin voted for it anyway. He has a clear mandate not just to run the state – he had that already – but to step up his attacks on them.

One might argue whether their recall effort was a strategic error, but given the number of people they mobilized and the degree to which they had Republicans rattled right down to the wire, suggests it was not reckless. If audacity implies anything it is boldness and daring. They came. They fought. And they were conquered.

To insist that the fight should not have been joined one would not only need 20-20 hindsight. (Unions in Ohio defeated anti-union measures in November and six months ago Walker looked far more vulnerable). One would also have to imagine a scenario in which labour saw its rights being comprehensively undermined and did not try every possible legitimate means to protect them.

In the words of Alexis Tsipiras, the leader of the Greek party Syrzia, which is leading the battle against austerity in that country: "Defeat is the battle that isn't waged, and when someone fights there is the big chance of winning; and we are fighting this to win. Lost battles are battles that are not fought." And while that does not transform defeat into victory it does provide for useful lessons that could not have been learned in the absence of the struggle itself.

First, the Republicans have a get-out-the vote operation that is every bit as dynamic as those of the Democrats and organised labour. Recall supporters made themselves believe that those huge turnouts in Democratic areas were all for them when it was actually Republicans coming out behind enemy lines.

Second, money matters and the Republicans have a lot of it. Walker outspent Barrett by seven to one, with most of it coming from outside the state. This is a very corrupting fact about American politics, particularly since Citizens United. But it is a fact nonetheless. So either unions and grassroots organisations don't participate in the electoral process but work outside it to change the debate and mobilize public opinion – like Occupy Wall Street – or they have to find money from somewhere.

Third, if progressives are looking for political support they should look down to the grassroots, not up to the Democratic party. Rhetorically Obama was with them all the way. Not only was he all about the audacity of hope. But in his campaign he would quote the late poet and essayist June Jordan, with an empowering message about the need for political activism: "We were the ones we are waiting for."

Wisconsin radicals could have been waiting for him until the cows in this dairy state came home. He wasn't coming. The fierce urgency of now had given way to the tepid ambivalence until November. He could have sent Joe Biden as a show of solidarity. Instead they kept their distance.

True, the recall was a risk. But victory against Walker on Tuesday night was no less likely than Obama's victory four years ago. Spineless as this was, few of the activists to whom I spoke believed his involvement would have been decisive, or raised his absence as a problem even if most would have liked him to come.

If this was less than audacious given the defeat it transpired to be electorally savvy. For while it hurt labour, both locally and possibly nationally, it did not hurt Obama. Walker's victory does not translate into a defeat for Obama in November. The same exit pollsters that gave Walker a victory also showed Obama defeating Romney by nine points.

Finally the Tom Barrett and the Democrats ran a confused and unconvincing campaign. Everybody knew what Walker stood for even if they didn't like it: small government, weak unions and low taxes.

It was never quite clear what Barrett stood for apart from that he was not Walker. His message meandered from corruption among Walker's former aides, to the call for a more consensual leadership style from Madison. In 2010 that would have been all well and good. But the recall was prompted for a reason – Walker's attacks on trade unions as a foil for balancing the budget. Yet Barrett did not stand as a defender of labour and did not produce a credible, progressive response to the state's fiscal problems.

Tom Barrett was the John Kerry of Wisconsin. In the five days I've been reporting from the state I have yet to meet a single person who voted for him as opposed to against Walker. In the end this was just not enough. His failure to give some vision for what Wisconsin under his stewardship would look like could not win over the coveted independents or sufficiently inspire his base.

When it came down to it, the people of Wisconsin wanted more than the absence of Scott Walker. They wanted the presence of an alternative.

follow on twitter
RT @MCRSociology: Gary Younge discusses identity politics and America with Will Hutton in this episode of @thewesocietypod https://t.co/72…
RT @mart_welton: Congratulations to all those getting their A-level results today. If you have BBB at A-level or above you can still apply…
RT @BernardineEvari: Please follow the groundbreaking online #MuseumofColour UK, founded by the unstoppable Samenua Sesher. The 1st gallery…
RT @EthnicityUK: Gary Younge is interviewed by @sonikkalogan about his work on racism and gun violence in @the_hindu #DataPoint podcast. h…
RT @thefreedomi: 🚨 NEW: Saudi women’s rights activist & academic Salma al-Shehab was sentenced to 34 years in prison + 34 year travel ban f…
RT @LRB: #DawnFosterForever! On Thursday 15 September at the @LRBbookshop, @BizK1, @piercepenniless, Lynsey Hanley and @garyyounge will d…
RT @ShowunmiV: This is how we support Black women and girls https://t.co/8YmgV21zHo
RT @sonikkalogan: It's #DataPoint Pod Thursday! In this week's episode, I talk to @noraneus, @garyyounge and @Casey_J_Wooten about the U.S.…
RT @bgnoiseuk: Next month, @LRBbookshop will host an event to celebrate the life and work of Dawn Foster with @BizK1, @piercepenniless, Lyn…
Help me Twitter. The quote: ""You can cut all the flowers but you cannot keep Spring from coming." is most commonly… https://t.co/Xs7JkiOEd5
© Gary Younge. All Rights reserved, site built with tlc
Bepreve price per pill Vytorin street price Buy real prandin online How much does trandate cost per pill Azor online in india Cheap generic astelin What i should buy with tarceva Jalyn online Get arava online Can i buy hytrin